Kirk's Works: Counting down the Top 25 wins of the Ferentz era - Number 8

Share All sharing options for: Kirk's Works: Counting down the Top 25 wins of the Ferentz era - Number 8 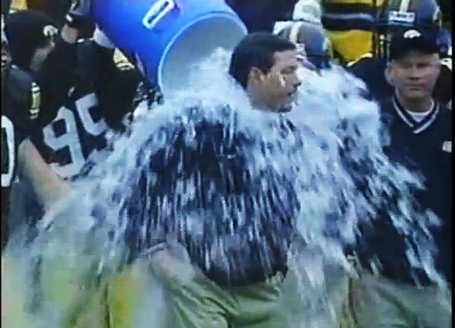 Maybe not the greatest idea in November

What the hell just happened? Here’s a question that even our Armani-wearing, Ferrari-driving, baked potato-worshiping compatriots from Northwestern cannot answer.

At 7-2, the Wildcats were tied atop the Big Ten with Purdue and only needed to beat 2-8 Iowa and a mediocre Illinois team to clinch a share of the conference title and earn a possible Rose Bowl berth in just Randy Walker’s second year. Piece of cake, right?

There was just one problem. 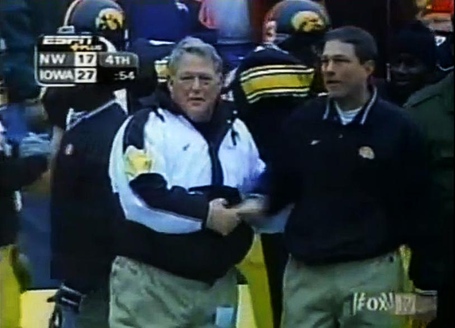 You need to prove to a friend that Norm Parker was a great defensive coordinator (which begs the question, why are you hanging out with somebody who doesn’t think that)? Show them this game. Playing against a Northwestern squad that had scored 95 points in its previous two games and averaged more than 38 points per game, Parker kept the Wildcats off balance all game (the crappy November weather helped too).

When you watch the video below, look at how many times Zak Kustok fell victim to a coverage sack and while you’re at it, watch when Kustok gets sacked on blitzes. That’s right: blitzes. Even better: blitzes with Bob Sanders.

Iowa held Northwestern to just 378 yards of offense and sacked Kustok seven times in the game.

Of course, Wildcat fans will claim that this was all just a let-down game after Northwestern blew its proverbial load in a truly mind-blowing 54-51 shootout with Michigan a week earlier which produced this wonderful nugget from Sports Illustrated:

After the win, Northwestern students stormed the field and tried unsuccessfully to tear down a goalpost. "We need to get some of those students in the weight room," Wildcats coach Randy Walker joked to the Chicago Tribune

Claiming it was solely a let-down game by Northwestern, though, marginalizes just how strong Iowa (especially the defense) played in the contest.

The two teams traded field goals in the first quarter before Nate Kaeding kicked a second to make it 6-3. Iowa then put Northwestern on notice when Kahlil Hill caught a short pass from Kyle McCann, froze a Wildcat defender and then dove past the pylon for a touchdown which made it 13-3 at halftime.

Then in Iowa’s first possession of the second half, McCann fired deep to Kevin Kasper for a 42-yard touchdown that made it 20-3. Kustok answered for the Wildcats with a QB sneak, but Northwestern never got any closer as McCann scored on his own QB sneak to make it 27-10. Another Wildcat touchdown did little and Iowa had the win.

Heroes: The Iowa defense was fantastic. It took Wildcat running back Damien Anderson 31 carries to gain his 132 yards and Kustok attempted 45 passes for his 248 yards, this coming a week after Anderson rushed for 268 yards against a Michigan team that went 9-3 and Kustok passed for 322 yards. McCann, meanwhile, had a hand in all three of the Hawkeyes’ touchdowns with scoring passes to Hill (seven catches for 79 yards) and Kasper (five catches for 15 yards).

Important? If the double overtime victory over Penn State a week earlier did not prove it, this game did: fans could see a definite light at the end of the tunnel that was the dark ages of 1998-1999, and most of 2000 for that matter. The victory marked the first time since 1997 that Iowa had won back-to-back games (nearly three whole years!) and was probably the biggest proof of Ferentz' first two years that things were going to get better (and they did, very quickly). Just how excited were Iowa fans after the victory and just how dire were the times? This happened:

There possibly was alcohol involved

A/V: Courtesy of our buddy TheHawkeyeHistorian:

Personal memories: I was leaving, of all places, Chicago when this game took place and honestly didn’t pay any mind to the contest. That is, until we stopped at the oasis at DeKalb and I caught a glance of the score. We listened to the game the rest of the way home (and there might have been some excessive honking).