Kirk's Works: Counting down the Top 25 wins of the Ferentz era - Number 9

Share All sharing options for: Kirk's Works: Counting down the Top 25 wins of the Ferentz era - Number 9 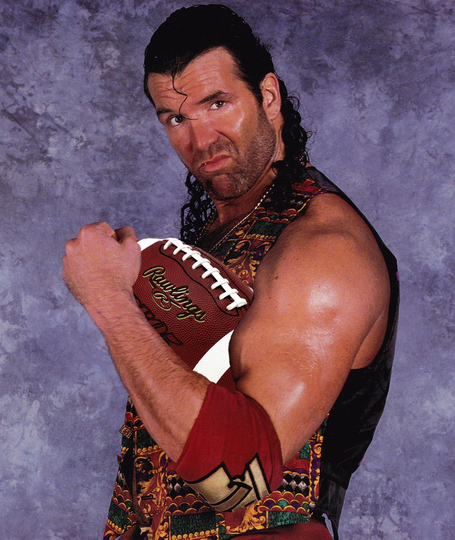 What the hell just happened? I feel like I’ve seen this game before. Iowa takes on opponent that is smarting after a big loss the year before and is looking for revenge. Said opponent then jumps out to an early lead and seizes all of the momentum. The Hawkeye defense, though, begins to tighten up, the special teams comes up with a huge play (or two) and the offense takes it from there.

And overall, this game was much, much better.

While there was not that one defining play like Adrian Clayborn’s blocked punt, but as far as exciting games from start to finish this one ranks near the top.

OK, the first 10 minutes of the game were not exactly exciting for Hawkeye fans, but they did set the stage for a pretty nifty comeback.

Iowa’s first drive went -4 yards on three plays; their next one after a Michigan punt went eight yards on three plays. This time the Wolverines scored and the Hawkeyes found themselves in an early hole. How did Iowa respond? Three plays, 0 yards. 1:03 off the clock.

Michigan got the ball back and scored again with John Navarre connecting with Braylon Edwards for a 14 yard touchdown that made it 14-0.

A week earlier, the Hawkeyes had lost their first game of the year when they were unable to comeback after ceding two early touchdowns to Michigan State. Now that same scenario was in play.

This time, though, things were different. Iowa answered Michigan’s touchdown with one of their own as Nate Chandler fell forward from the six-yard line for a score.

The two teams traded field goals and midway through the second quarter it was 20-10 Michigan. Iowa, however, seized momentum just before halftime as ‘Razor’ Ramon Ochoa fielded a punt at his own 39 yard line and returned it 43 yards to the Michigan 18.

Three plays later, Chandler hit Calvin Davis for a six-yard touchdown and Iowa was down just three heading to halftime.

The second half started as a defensive struggle before Antwan Allen picked off Navarre and gave Iowa great field position. Nate Kaeding booted a field goal and the game was tied.

After three-straight punts, Iowa started a drive with 9:50 left and methodically drove the ball down the field, converting three different third downs before Chandler said "F*%$ it, I’m going deep." And since this was 2003, of course Razor came down with the ball, holding it just long enough for the referees to signal a touchdown to make it 30-20.

Of course nothing with the Hawkeyes is easy and Michigan came right back with a long scoring strike to Edwards to pull within three with under four minutes remaining.

Iowa went three and out on its next drive and Michigan got the ball back with 3:23 remaining with a chance to tie or even take the lead. The Wolverines pushed the ball into Iowa territory, but then three-straight Navarre pass attempts fell incomplete (the last on 4th and 12) and a raucous Iowa crowd celebrated a second-straight victory over Michigan.

Heroes: There’s a reason Ramon Ochoa has become a bit of a cult favorite among Hawkeye fans (RossWB has a tattoo of Ochoa on his ankle). Not only did he have an awesome nickname, but he also was the man in 2003. Ochoa started the year on the second team (his statistics in 2002: five catches, 64 yards), but with Maurice Brown’s injury, moved into the starting lineup and took advantage of his opportunity, catching 34 balls for 477 yards and six touchdowns (with his touchdown in this game and two touchdowns against Arizona State being his most famous). Ochoa also averaged 22 yards on his kickoff returns and 12.4 yards on his punt returns (wait, you can return a punt?) and took one to the house from 70 yards out. Special mention to tight end Erik Jensen, who caught three passes — all for first downs — covering 60 yards. He also had that crazy look in his eye. 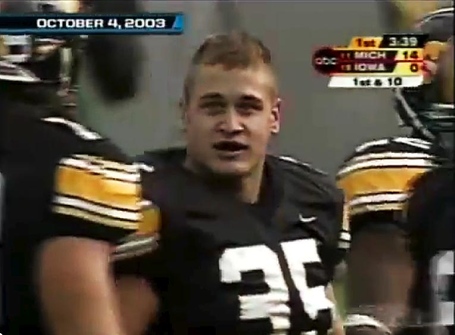 Reminder: do not knock off Erik Jensen's helmet

Important? After falling to Michigan State a week earlier, it was great for Iowa to get back on track in a big way against a big foe (it’s worth mentioning that this was Michigan’s only Big Ten loss and the Wolverines won their next six games before losing to USC in the Rose Bowl). Iowa followed up the win by falling to Ohio State 19-10 in a game where all of the points were scored on special teams.

Personal memories: This game was on the same day as my senior homecoming dance. I left my house just after the Razor scored because that had to be it, right? Then when I picked up my date Braylon Edwards scored, so the 10 minutes of pictures felt like an eternity. Finally, we got in the car and I was able to listen to Michigan’s final drive on the radio. Best. high. school. dance. ever.