What Should We Expect From C.J. Fiedorowicz This Year?

Share All sharing options for: What Should We Expect From C.J. Fiedorowicz This Year?

While many things about the impending 2012 Iowa football season are unnerving (hello there, defensive line; how's it going, running backs?), there are a few things about it that are genuinely exciting. One of those genuinely exciting things figures to be the development of tight end C.J. Fiedorowicz. We've essentially had a mancrush on him since he was a recruit (um, please don't tell Chris Hansen); he had pretty nice highlights (see?) , jaw-dropping measurements (6-7, 265, 4.5 40 time), and a name that made for a fun nickname (The Polish Hat). What wasn't to like? For a decade, Iowa has made NFL-caliber tight ends out of overgrown receivers and underfed linemen, plucking them out of small towns in Iowa and elsewhere and developing them into reliable pass-catchers and dependable blockers.

The one thing they hadn't seen too often at the position was freakish athleticism. You can teach someone to be a good blocker; you can't exactly teach someone to be 6-7 and run like a gazelle. (The one drool-worthy athlete Iowa had landed at tight end, Tony Moeaki, had a star-crossed career at Iowa, owing mainly to the fact that he was apparently mistaken for a running back by a certain vengeful deity and stricken with a stupefying series of injuries and ailments.) Enter: C.J. Fiedorowicz. His development hasn't been as fast as we had hoped when he was a coveted recruit -- learning how to block and learning the ins and outs of the Iowa playbook and what it takes to play big-time college football have both taken longer than anticipated -- but he started showing signs in the closing stretch of the season a year ago and has been garnering glowing praise from coaches and pundits ever since. But what should we really expect out of Fiedorowicz this season?

Before we can answer that question, though, it might be instructive to look at the past for a bit.

(NOTE: These tables do not include all tight end stats, only those from tight ends who caught at least five passes in a given season.) 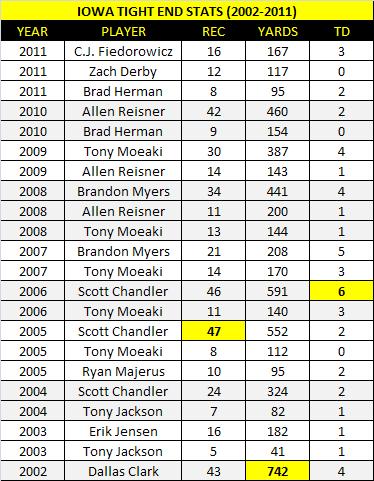 Last season was the first year since 2003 where Iowa didn't have a single tight end with over 200 receiving yards. Brad Herman entered the season as the favorite to be the Next Inexplicably Great Iowa Tight End, but by the end of the season he was buried on the depth chart behind Los Hermanos del Sombrero. It was not a particularly inspiring year from the tight end position. In 2010, Allen Reisner held down the fort capably, if somewhat uninspiringly. 2005-2009 were the Moeaki years: when healthy, he was a dynamo. Unfortunately, he was rarely healthy. Fortunately, Iowa also had Brandon Myers in those years, who was a more than capable understudy.

Before Moeaki and Myers, Scott Chandler ruled the roost at tight end and in terms of raw production, he's probably at the head of the class when it comes to Iowa tight ends under Ferentz. For the sake of comparison:

Clark did more with less time than anyone else -- he racked up all those numbers in just two seasons at tight end. Chandler's numbers came across three seasons (he was a non-factor in 2003; and, technically, I think he was still a receiver that year) and it's anyone's guess how many games Moeaki was actually healthy for -- maybe 2.5 seasons worth? Chandler leads the way in receptions and yards and is just behind Moeaki for touchdown receptions. Erik Jensen led an unremarkable set of tight ends in 2003 (that was the year of the smoke and mirrors passing offense; despite missing most of six games that year, Mo Brown still finished second on the team in terms of receptions, yards, and touchdowns), and 2002 was, of course, the Dallas Clark wins the Mackey Award year.

Clark set the high-water mark for receiving yards that year (742), while Chandler posted the top marks for receptions (47) and touchdowns (6) in 2005 and 2006, respectively. Only four times over the last decade has an Iowa tight end caught more than 40 passes (Clark in 2002, Chandler in 2005 and 2006, and Reisner in 2010), and only three times have they had over 500 receiving yards in a season (the aforementioned Clark and Chandler seasons). In other words, if we're penciling in The Polish Hat for 45 receptions and 600+ yards, we should realize that while doing so is by no means impossible , it also means that we're tabbing him to have one of the best seasons an Iowa tight end has had in the last decade. And he's still a player who caught just 16 passes for 167 yards a year ago. (I'm deliberately ignoring the touchdown portion of the equation, because forecasting touchdowns is extraordinarily difficult. On the other hand, the last time Iowa had serious question marks at the receiver position -- 2006 and 2007 -- tight ends caught 9 and 8 touchdowns, respectively. So it's probably safe to assume that Fiedorowicz will have ample opportunities to snare touchdowns this fall.)

Of course, there's also the little matter that Fiedorowicz isn't the only tight end on the roster. When Clark and Chandler had their massive seasons at Iowa, there was a fairly significant drop-off from them to the next tight end on the depth chart. It doesn't seem like that's the case (so far) this year; Fiedorowicz is at the head of the pack, but he's not lapping the field yet. Zach Derby returns and remains a capable second option and throughout spring and fall camps there have been varying reports of excitement about the play of Jake Duzey (who redshirted last year) and Ray Hamilton (who did not). Any or all of those players could cut into Fiedorowicz's opportunities at tight end this fall.

Meanwhile, those stats all came from offenses directed by Ken O'Keefe. But like his soulmate, LeBron, KOK has taken his talents to South Beach, with Greg Davis sliding in to replace him as offensive coordinator. What did tight ends do under Davis at Texas? 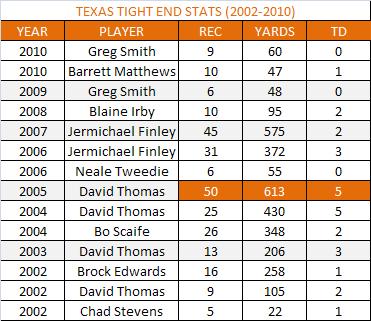 Sometimes a lot, sometimes not a whole lot. This data is useful because it validates one of the key points in favor of Davis' hiring: he's malleable. When he's had talented, NFL-caliber tight ends, he's been more than happy to make them critical parts of the passing offense (see: Finley in 2006 and 200, Thomas in 2004 and 2005, Scaife in 2004). On the other hand, when the talent in the passing offense has swung more toward wide receivers, he's put more of the load on their shoulders. Tight end production at Texas basically fell off a cliff after Finley left for the NFL, but the passing offense didn't because they had a pair of receivers named Quan Cosby and Jordan Shipley that they could (and did) rely on. (I think it's also possible that Texas simply didn't do a very good job of recruiting tight ends, post-Finley.)

Based on everything we've heard out of spring and fall practice, Iowa's offense is stronger at the tight end position than at the wide receiver position and there seems to be great confidence in the tight ends being very productive this year. Greg Davis has spoken glowingly about Fiedorowicz on several occasions and, as we can see from the table above, when he has a tight end he really likes, he doesn't seem to be too shy about giving him opportunities. I think it's safe to say that Fiedorowicz will have plenty of chances this fall to put together a big season. What does that mean, in terms of numbers? I think around 40 receptions and 500-525 yards (and 5-6 touchdowns, just for the hell of it) is a reasonable guess. Beyond that we're venturing into the realm of a truly special season. Which is certainly possible: a year ago I didn't seriously think that Marvin McNutt would put together the best season an Iowa receiver has ever had, and he went out and proved me very wrong. Fiedorowicz lacks the track record that Marvin had before last season, but he has the same quarterback, a coordinator that isn't afraid to use tight ends heavily, and an offense that figures to rely heavily on the passing game. If C.J. really has made "the leap" (as we all hope), then a spectacular season isn't out of the question.

What about you? What do you think is a reasonable expectation for The Polish Hat this season?