Kirk's Works: Counting down the Top 25 wins of the Ferentz era - Number 10

Share All sharing options for: Kirk's Works: Counting down the Top 25 wins of the Ferentz era - Number 10 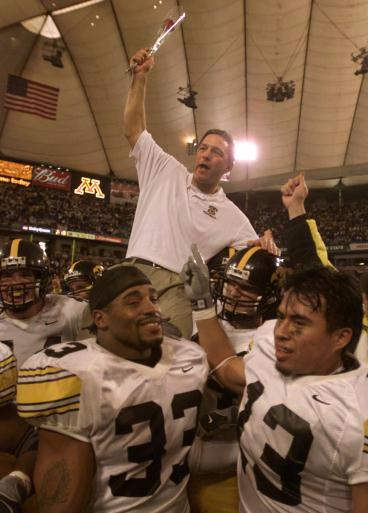 Yep, number 10. Deal with it (this is where sunglasses would come down, but you don't mess with Bob Sanders' head) (Photo by Buzz Orr/Cedar Rapids Gazette)

What the hell just happened? Alright, alright, get the pitchforks out. Brent Yarina, you are officially off the hook because there is a new controversy to ruffle the feathers of Hawkeye fans.

You know… that game.

Yes, it’s true. There were mixed feelings among the voters about Iowa’s 6-4 defensive masterpiece/offensive diarrhea win over Penn State in 2004, but nothing compares to this game. Two voters had this game in their top-two, another had it in his top-five, but there were two others who did not even have the game ranked.

What I am saying, basically, is blame them not me.

Alright, now that I’ve officially thrown my fellow writers under the bus, it’s time to back them up a little.

Compared to some of the other games on the Kirk’s Works list, this win over Minnesota is actually a little boring. Iowa scored on the first drive of the game and never trailed, but also never really blew out the Gophers until scoring the only 10 points of the fourth quarter. In the last few wins over the Golden Gophers, 2002 kind of sits right in the middle of tense, nail-biter (2004) and cathartic clobbering (2005, 2008).

Along the same lines, the game itself seems to lack a memorable moment. There’s no "7 got 6," there’s no Clayborn blocked punt, there’s no Shonn Greene superman run. Let’s face it, the first thing that comes to mind when the game is mentioned never actually took place in the game.

The greatest thing to happen in the Metrodome

But really who cares? For one afternoon in November 2002, everything was right in the world. The road stadium felt just like home, the Hawkeyes were, for the first time in 12 years, Big Ten champions and there was an overwhelming feeling that absolutely nothing was going to stop Iowa.

Not even the goalposts.

Heroes: Oh yeah, the game. This is probably going to surprise you, but Iowa was led by Brad Banks and Fred Russell. The former wrapped up his fantastic season with 100 yards passing through the air and two touchdowns, while also rushing for a pair of scores (Banks scored 24 points, Minnesota 21). Russell, meanwhile, gained 194 yards on the ground and needed just 17 carries to do it (11.4 yards per carry), while also scoring a touchdown. The final Hawkeye touchdown came from Jermelle Lewis, who added 101 yards of his own in the game. The Iowa defense forced six turnovers in the game with none better than Bob Sanders’ second-effort forced fumble on a punt.

A/V: From our good friend TheHawkeyeHistorian:

Personal memories: Never (and I mean never) have I been more confident in a result than I was in this game. Iowa was not losing; at all.. The perfect end to a perfect season. (Huh? Orange Bowl? USC? LALALALALALALALALALAH I can’t hear you).