Kirk's Works: Counting down the Top 25 wins of the Ferentz era - Number 22

Share All sharing options for: Kirk's Works: Counting down the Top 25 wins of the Ferentz era - Number 22

You'll believe a man can fly

What the hell just happened? Ten years later, the lasting image of this game is a 75-year-old Joe Paterno sprinting across the field after the postgame handshake to unleash his full-blooded Italian fury on the game’s officials.

And this is perfectly fine in my book because it overshadowed the other major story in the game: Iowa nearly blowing one of its best performances of 2002.

The Hawkeyes burst right out of the gate, scoring 17 points in the first quarter alone (thanks in large part to a stretch of 10 points in 1:05 as Nate Kaeding kicked a field goal, Larry Johnson fumbled, and Fred Russell scored), before Ed Hinkel supermanned dat ho to make it 23-0.

The lead grew all the way to 35-13 in the third quarter (in an example of the charmed life Iowa seemed to lead in 2002, D.J. Johnson returned a blocked extra point all the way for two points that played a huge part in the outcome) before Zach Mills turned into Johnny Unitas 2.0 in the fourth quarter. 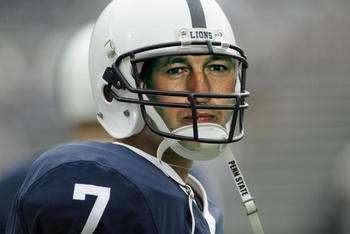 I'm not kidding, he was Johnny Unitas. Those Pennsylvanians love their football.

Penn State scored three different times in the fourth and probably pulled off the easiest fake extra point in NCAA history to tie things up at 35-35. Iowa had two chances in the red zone in the fourth quarter to probably ice the game, but had an interception and a fumble and the game went to overtime.

Iowa scored on a C.J. Jones touchdown in the first overtime (and benefited from a call of a catch on the sideline) and Penn State came up empty on their possession (with a similar play on the sideline going against them) giving Iowa the victory and Paterno the opportunity to qualify for the Senior Olympics.

Heroes: Brad Banks threw four touchdowns on the day with Jones catching two. Hinkel had just two catches in the game, but good lord was one of them memorable. Nate Kaeding kicked two field goals, including one at the end of the half that covered 55 yards and led Kaeding to sprint down to the end zone (perhaps to retrieve the ball). Also, Kevin Worthy completely destroyed Michael Robinson on a reverse pass.

Important? The Hawkeyes bounced back from their Iowa State debacle a week earlier with a blowout against Utah State, but this win was probably the first inkling of the type of year Iowa would have. Also, can you imagine what would have happened if Penn State completed the comeback and gave Iowa its second horrific loss in three games? *shudder*

Personal memories: In the immortal words of Bob Griese, this game was psychotic. The first half was some of the best football Iowa had played in a long time and then the fourth quarter happened and the knot in my stomach got bigger and bigger and bigger. You hit the point where you expected Penn State to complete the comeback and finish the heartbreak, but Iowa in 2002 proved time and time again to be a different team. And it started here.