It's Not Plagiarism If You Link To It: 'Twas The Night Before Football Practice

Share All sharing options for: It's Not Plagiarism If You Link To It: 'Twas The Night Before Football Practice 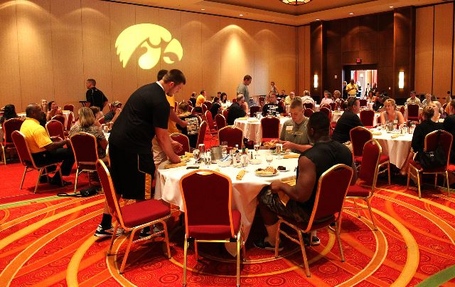 AND ALL THROUGH THE IOWA FACILITIES PLAYERS ARE REPORTING. The above pic is of freshmen yesterday. There are other photos on the Hawkeye Football Facebook page. Today, veteran football players report. Practice starts tomorrow.

IOWA RELEASED A REVISED TWO-DEEPS. I don't have a link to it yet but here are some of the changes per Twitter:

FERENTZ IS MAKING THE ROUNDS. Kirk Ferentz is talking Iowa football on the college football radio circuit. He talked to Yahoo Sports Radio about the upcoming season. Adam Rittenberg also has video of Ferentz on ESPN's Big Ten blog.

TYLER SASH HAS HAD HIS APPEAL WITH THE NFL DENIED. Sash is suspended for the first four NFL games this season due to a violation of the league's performance enhancing drug rules. Sash's teammate Andre Brown won an appeal for the same violation in June. The NFL denied Sash's appeal and his agent Jack Bechta isn't happy. Ralph Vacchiano, of the NY Daily news writes,

"it's impossible to know why Brown's suspension was overturned and Sash's wasn't for what appears to be the same drug and the same mistake."

"this kid really had no intention of doing anything illegally. I know what the definition of the rule is and I understand all about that and I've been there myself when you've had to ask yourself about (taking certain substances)."

TWO OF IOWA'S OOC GAMES MAKE ESPN'S TOP 20. ESPN's Big Ten blog has counted them all down, beginning at 48. Adam Rittenberg notes this upcoming match-up would have been better in 2010 or 2011. Northern Illinois lost a lot off of last season's MAC championship team. Iowa State at Iowa is considered the 6th best Big Ten out-of-conference game by ESPN. Iowa State hasn't won at Iowa in 10 years.

DON'T TELL PAT HARTY ABOUT AIRBHG, HE CAN'T HEAR YOU LALALALALALALALALALALALA. Harty thinks the timing of Johnson's citation and arrest is part of his dismissal. Harty wonders why Johnson would speed in University Heights. He also, ah, who cares.

FRAN IS BRINGING BACK THE HAWKEYE BLOWOUT. Friday, October 19th, Hawkeye fans will get their first look at the 2012-13 Iowa Men's Basketball team. Per McCaffery,

"For me, bringing back the Blowout is no different than working hard to establish great relationships with our former players and other friends of our program. The Blowout has significant tradition to it that is uniquely ours, so I'm eager to build on what made past Blowouts successful while making the changes that make it work well today,"

The time is still yet to be determined. The Hawkeye football team takes on Penn State the next day.