Share All sharing options for: The Steve Bigach Show, with Greg Davis

We all know about the new practice facility: Indoor field, new weight facility, updated offices for the coaches and meeting rooms for the players. What has received less coverage is that the team built a television studio so that defensive lineman Steve Bigach can record his own talk show. Today, the first episode of that show: The Steve Bigach Show. 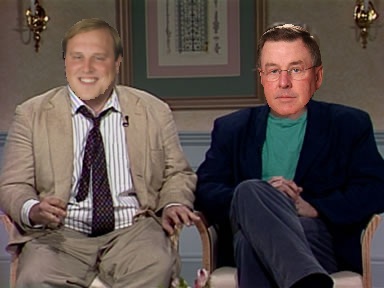 My guest today is Greg Davis, who is...um...the offensive coordinator at Iowa, and is, like...uh...

I'm so bad at this part.

Naw, Steve. You're doin' fine. I'm just pleased as punch to be here.

Now, before you came to Iowa, you coached at Texas, right?

Do you remember the time in the Rose Bowl where Vince Young was at Texas, and it was fourth down and you were down by three, and Vince Young dropped back to pass, and the guy was covered, and so he ran for the corner, and USC couldn't catch him, and he scored and they won the national championship?

Yes it was. It was a great play. We tried to flood the left side of the field, and USC was in man coverage, so it opened the lane for him to run right.

Do you...do you remember the time Vince Young went pro, and everyone was like, "he won't get drafted at all because he can't throw," and he was all like "I'm going pro and proving all you wrong" and he got drafted right away?

Yeah, sure I remember that.

Yeah, I suppose it was. Wish nothing but the best for ol' Vince.

No, pretty sure he didn't.

STUPID STEVE! STUPID! CAN'T BELIEVE I MADE SUCH A STUPID MISTA--

Sorry. Sorry about that.

Yeah, sure, you're doing great.

You're the quarterbacks coach, too, right?

Do you remember that time that James Vandenberg went bear hunting, and he was up in the tree with a bow and arrow, and the bear came by and so he shot the bear with the bow and arrow, only it didn't kill the bear, so the bear was angry, and the bear started climbing the tree, and so James had to shoot him again?

Yeah, I saw a newspaper article about that.

Yeah, that was awesome.

You're from Texas, right?

Did you ever see Texas Chainsaw Massacre?

Yeah, a long time ago.

No, Steve. That was just a movie. There wasn't really a Texas chainsaw massacre.

I think...I think we have time for one more question.

Did you see Hard Knocks?

Yeah, I saw that.

So, uh, this was the Steve Bigach Show. I want to thank Greg Davis, who is the bes-- one of the best -- like, the greatest offensive coordinator of...and a quarterback coach...

COME ON STEVE! SO STUPID!

Yeah, of course. It was a good show.