It's Not Plagiarism If You Link To It: Iowa Football Hosts A Special Guest Yesterday

Share All sharing options for: It's Not Plagiarism If You Link To It: Iowa Football Hosts A Special Guest Yesterday

IOWA SHOWED UP TO PRACTICE AND... 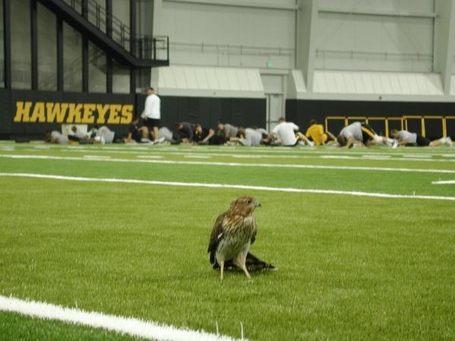 ESPN'S BRIAN BENNETT TAKES A SHOT AT WRITING FICTION. He has a best case/worst case for Iowa's upcoming football season. The best case? A repeat of 2009. Worst case? James Ferentz becomes Iowa's quarterback and some janitor plays running back.

STAYING WITH ESPN'S BIG TEN BLOG. James Vandenberg is the 13th best player in the league, per Brian Bennett. The countdown started at 25 and Vandenberg is the first Hawkeye to make the list. If Keenan Davis doesn't show up there's a good chance JVB is Iowa's only member of ESPN's Top 25.

ESPN HAD IOWA'S SECONDARY AS THE 8TH BEST UNIT IN THE LEAGUE. But, they list Micah Hyde as the third best defensive back. Interestingly, Iowa's unit as a whole was ranked behind Wisconsin but not a single Badger made the list of 10.

FERENTZ DOESN'T CARE IF WE THINK HIS TEAM IS BORING. He does care, writes the AP, if we think they are average. It wasn't long ago we talked about 7 getting 6. The conversation turned to if "7 is the new 6." There's changes in the coaching staff and perhaps philosophy. Ferentz said, "it's been a different offseason certainly, and it's been enjoyable." He added, "now we're doing what we really like to do."

ANOTHER PHLUFFLY PIECE FROM PHARTY. James Morris doesn't like being average. The team, not him personally (I think). Iowa's been average, "chip on the shoulder," young guys working hard. That's it, there's your summary.

GONE BABY GONE. John Sawhill decided to forgo his senior season playing defensive tackle at Drake to walk-on with the Hawkeyes. Injuries prevented Sawhill from ever playing for the Hawks. Iowa announced he is no longer with the team.

THIS IS PROBABLY THE WORST THING EVER PUBLISHED ON YAHOO SPORTS. Kinnick Stadium is the ninth most difficult college football stadium for opponents to play in per Yahoo's Eric Holden. Awesome right? Read the rest of the list.