Kirk's Works: Counting down the Top 25 wins of the Ferentz era - Number 12

Share All sharing options for: Kirk's Works: Counting down the Top 25 wins of the Ferentz era - Number 12 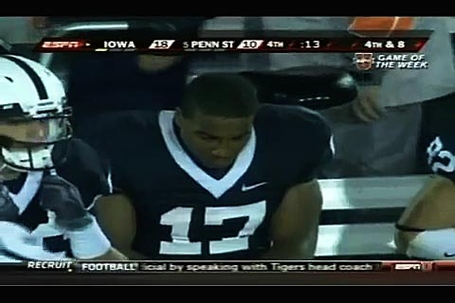 What the hell just happened? Hey, Penn State again, what are the odds?

A rematch with Iowa was circled on the Nittany Lions’ calendar probably minutes after the Hawkeyes knocked Penn State out of the national title picture a year earlier.

Nearly 110,000 white-clad fans packed into Beaver Stadium to watch their fifth-ranked team earn some much sought after revenge and take Iowa out to the woodshed.

And they could not have asked for a better start as Daryll Clark hooked up with Chaz Powell (who blew right past Amari Spievey) for a 79-yard touchdown on Penn State’s very first offensive play from scrimmage. Ricky Stanzi was intercepted on the ensuing drive and Penn State meticulously marched down the field, turning in a 20 play drive that culminated in a field goal to make it 10-0 with the first quarter nearly in the book.

Then the universe righted itself and the Iowa defensive line began to take over the game, finding tons of success against Penn State’s offensive line of traffic cone, cactus, turnstile, life-size poster of Lavar Arrington and Stefen Wisniewski. Broderick Binns forced a Clark fumble that was recovered in the end zone for a safety and the Nittany Lions accounted for -6 yards on their remaining drives of the first half.

The Iowa offense, meanwhile, was able to move the ball, but ran into their own bad luck (Colin Sandeman bicycle-kicked an interception for god sake) and managed just a Daniel Murray field goal during the first three quarters of play.

Turns out 6-1 215 pound safety Nick Sukay was not the ideal man to stop the hard-charging Clayborn, who picked up the ball and brought it back 53 yards for a touchdown that gave Iowa the lead.

That seemed to open the floodgates. Clark threw an interception to Pat Angerer on Penn State’s next drive and Adam Robinson effectively put the game out of reach when he scored the first rushing touchdown that the Nittany Lions had allowed that season.

The remainder of the game was pretty much the destruction of the Penn State psyche. First, the Hawkeyes trampled the Nittany Lions’ hope when they forced and recovered a fumble on an Evan Royster run that would have at least put Penn State in field goal range. Then A.J. Edds finished the bitchmaking of Clark with a third interception before Iowa rubbed salt in the wounds by trotting out Daniel Murray to kick a field goal with eight seconds remaining (guess how much time was left when Murray made his kick the year before? Six seconds, but phew is that close).

Heroes: The Iowa defense takes top honors in the game, allowing 309 yards of total offense (with 147 of them coming on Penn State’s first two drives). Clark was only sacked twice, but never really had much time to throw and Iowa earned three interceptions (one each by Angerer, Edds and Shaun Prater). Iowa’s freshman duo of Robinson and Brandon Wegher combined for 161 yards on the ground with a touchdown. Maybe the most unsung hero was Ryan Donahue, who averaged 35.6 yards on his punts and dropped two inside the 20 with one ultimately leading to the Iowa safety.

Important? Nobody really knew just how good the 2009 Iowa team was when this game was played. The bar was not set very high when Iowa needed two blocked field goals to beat Northern Iowa, but the Hawkeyes’ reputation was beginning to build back up with a rout of Iowa State and a nice win over Arizona. This win, though, on national TV no less, let people know that Iowa was going to be a team to be reckoned with in 2009, whether people wanted that or not.

A/V: First, let’s start out with some highlights:

And then WHO-TV’s recap of Dolph and Eddie’s slightly biased call of the game:

Personal memories: The opening Penn State touchdown was one of those moments where it’s either a fluke and Iowa will get back in this game or the beginning of a complete evisceration. Fortunately, it was the former and the game steadily got better culminating in Clayborn’s punt block that led to a sprint around the house and plenty of horrific white guy fist pumping.