Kirk's Works: Counting down the Top 25 wins of the Ferentz era - Number 14

Share All sharing options for: Kirk's Works: Counting down the Top 25 wins of the Ferentz era - Number 14 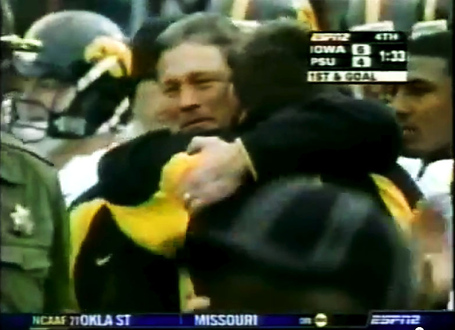 It's getting a little dusty in here

What the hell just happened? Ugly. Beautiful. An offensive disaster. A defensive masterpiece. The game that set back football 40 years. The game of the Ferentz-era. The 2004 game between Iowa and Penn State is a measure in contrasts. Even among our esteemed voters: two had the game ranked low on their list, two had it ranked high and one had it ranked near the middle.

Ugly games happen to everyone in college football (some teams do have more than others). So what makes this particularly ugly game — right down to dreary conditions at Happy Valley — special? Well, that’s obvious: it’s our ugly game and we came out on top.

Actually, you can boil it down even further to just three words — Fuck You Safety.

We like to joke a lot at BHGP that 'punting is winning' and during one gloriously crappy Saturday morning/afternoon in October that mantra was full of truth.

With Iowa punting from its own end zone with what actually seemed to be an insurmountable 6-2 lead late in the fourth quarter, Kirk Ferentz had punter David Bradley take the snap, run toward the corner of the end zone and step out the back of it for a safety. Bradley did just that (and Iowa was called for holding on the play for good measure) and the Hawkeyes effectively gave the Nittany Lions two free points.

Last week, Mr. Vint talked about the dickishness of Iowa’s 55-0 romp of Minnesota and it would seem that giving away free points and giving your opponent the ball where a field goal could win the game would be equally dickish (it’s called the Fuck You Safety after all). But the move, while unconventional, proved to be both the safe one and the smart one (Ferentz did not want to risk a short field or even worse, a blocked punt) as Penn State’s ensuing drive ended with an interception on the very first play.

The Hawkeyes picked up two first downs on their next drive (the first two of the second half) and took five minutes off the clock before punting (from the Penn State 35 of course). The Nittany Lions proceeded to fumble and Iowa got one more first down on an offsides call to run out the clock on the victory.

Penn State got on the board first during the opening drive of the game as a snap went over Bradley’s head and the punter kicked the ball out of the back of the end zone. Iowa, though, got field goals by Kyle Schlicher in the first and second quarters to go up 6-2 at halftime.

The Nittany Lions had two great chances in the second half. They blocked a Bradley punt and took over at the nine yard line, but gained just one yard on their next three games and Robbie Gould missed a field goal.

During its first drive of the fourth quarter, Penn State moved the ball from midfield to the Iowa nine again but Michael Robinson was intercepted at the goal line by Antwan Allen setting the stage for David Bradley’s finest moment.

Heroes: The heroes begin and end with the Iowa defense. The 2004 Penn State was not exactly an offensive juggernaut, but the Hawkeyes were at their best, pitching a shutout and holding the Nittany Lions to just 136 yards (two drives ended with Penn State going backwards, three others did not go anywhere). The defense also intercepted four passes from the two-headed monster of Zach Mills and Michael Robinson or Zachael Robinills. Special mention also goes to the big man himself, Kirk Ferentz, who lost his father during the week before the game, left the team early to attend the funeral and then picked up one of the most unique wins of his career. The tearful Ferentz hugging his staff and his son is one of the most emotional moments of the last decade.

Important? The win came on the heels of a pair of blowout victories against Michigan State and Ohio State, so offensively the game felt like a step back, but the defense, my god, the defense. It showed that even when the offense was not clicking in 2004, opponents were still in trouble because the Iowa defense was just that good.