Kirk's Works: Counting down the Top 25 wins of the Ferentz era - Number 15

Share All sharing options for: Kirk's Works: Counting down the Top 25 wins of the Ferentz era - Number 15 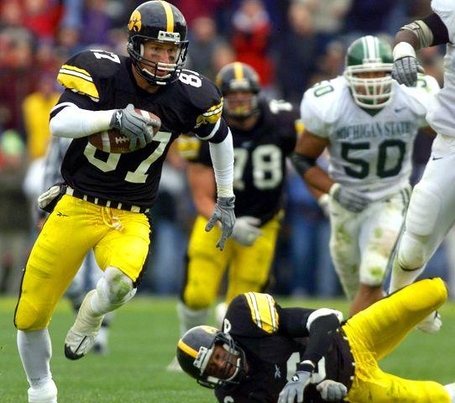 This happened a lot in 2000 via thegazette.com

What the hell just happened? Hey, remember that first Ferentz win against Northern Illinois way back in 1999 (Number 23 on our list)? The one that provided a smidgeon of hope that a turnaround could be done quicker than expected?

Iowa did not win another game in 1999, losing their remaining eight games by an average 20.875 points (and God knows it hurts to lose by freaking decimal points) with all coming against Big Ten opponents.

The Hawkeyes followed things up in 2000 by playing a non-conference slate devoid of MACrifices, but instead loaded with good Big 12 teams --- Kansas State (9-3), Nebraska (10-2) and *gasp* Iowa State (9-3). Wait, I guess there was a MAC team, Western Michigan, they beat us too.

The Big 10 season started with a trip to Bloomington to take on the Fighting Antwan Randle-Els and Iowa kept up its futility with a 45-33 loss that saw Indiana rush for 433 yards. So, needless to say, hopes were not very high when a ranked Michigan State team came to Kinnick for Iowa's homecoming in early October.

What occurred in those 60 minutes, though, looked an awful like the framework for much of Iowa’s future success.

Defense bending (to the tune of 280 yards rushing), but not breaking? Check.

Offense coming up with the big plays when they were needed? Check

Kirk Ferentz claiming that the game was not pretty*? Check.

*Money quote: "There were some plays out there that weren’t so pretty, what have you. The whole thing’s the Mona Lisa as far as I’m concerned. That was a Picasso." Kirk Ferentz, art lover.

Iowa jumped out to a 7-0 lead in the first quarter on a Ladell Betts touchdown run and kept the advantage even when Michigan State scored by blocking the extra point.

The Spartans came back and added a field goal to take a 9-7 lead into the halftime and then created some breathing room with a touchdown. The breathing room lasted all of 20 seconds, basically the time it took Kahlil Hill to return the ensuing kickoff back for a touchdown.

Within two, Iowa struck late as living legend Kevin Kasper took a jailbreak screen from Jon Beutjer and weaved his way into the end zone with just under three minutes remaining. Michigan State had three different Hail Mary tosses to the end zone fall incomplete and Iowa had its first win in 13 games.

Heroes: Kasper was unbelievable in 2000, catching 82 passes for 1,010 yards and seven touchdowns. He caught five of those passes against Michigan State for 67 yards and the winning touchdown. Hill proved once again that he was one of the best return men in the conference. The Iowa defense, meanwhile, got ran over again with T.J. Duckett rumbling for 246 yards (not surprisingly a career high) and a touchdown, but the Hawkeyes allowed just 180 yards through the air and intercepted Ryan Van Dyke twice

Important? How do I put this? Iowa had not beaten a ranked opponent since 1997. That’s a long time. Iowa had not won a Big Ten game since beating Northwestern in 1998. That’s a long time! Iowa had not won a football game of any substance for more than a year. THAT’S A LONG FUCKING TIME! The 13-game losing streak was the largest in team history and with the Hawkeyes of the 1970s, that's saying something. The Hawkeyes lost their next three games before finishing their season on a winning stretch that carried into 2001. If Iowa loses to Michigan State and then the next three games, and the losing streak reaches 17. Do the Hawkeyes go winless in 2000? Does Ferentz make it to 2001? Thankfully, those questions never had to be answered.

A/V: There are no clips of the game on the YouTubes, but here is a Kevin Kasper highlight film to satisfy your wide receiver lust.

Personal memories: In an attempt to make half of our readership feel old, I will confess that I was a freshman in high school when this game took place and the only thing I distinctly remember is Kasper’s touchdown catch. Another thing that will make you feel old: Kevin Kasper is 34.