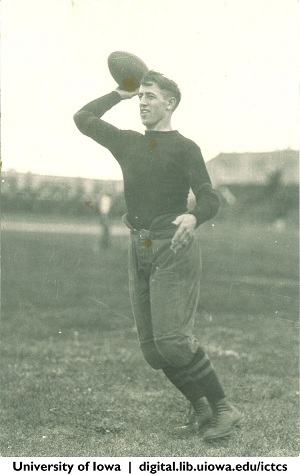 Both Aubrey and Glenn would enroll at Iowa in 1918. Although college football allowed freshmen to play during World War I the duo didn't contribute until their sophomore seasons. Perhaps, because he briefly served in World War I. Both Devines joined Gordon Locke in the backfield; Aubrey the quarterback, Glenn a halfback.

It is written that Devine never threw an interception in his career. While the forward pass was still a relatively new concept in football, Devine was the master of the roll out pass. In addition to being Iowa's quarterback, Devine handled the team's punting, drop kicking and was the return man.

Devine led his team and the conference in scoring in 1920 and 1921. He'd pass for four touchdowns and rush for another two in a thrashing of rival Minnesota. Gopher coach Henry Williams would state after the game that Devine was "the greatest player who ever stepped on our field."

"the greatest all-around backfield man I have ever coached or seen in the modern game. Others may have been great in open field running, there may have been better punters or drop kickers, but I have never known any backfield man whose accomplishments in running, punting, dropkicking, and forward passing combined equal those of Aubrey Devine. In addition, he was a leader and field general of the highest type."

He was Nile Kinnick before there was Nile Kinnick. He's still Iowa's record holder for rushing yards in a season for a quarterback with 895. He ran track at Iowa and even earned three letters playing basketball. While accomplishing all of that he also earned the Big Ten Medal for academics.

Following Iowa, he would stay in athletics becoming a basketball coach at the University of Denver. He'd then follow his former coach, Howard Jones, and become part of his football staff at Southern California. Devine would practice law and work for the Veteran's Administration in California.

He would join Gordon Locke and Duke Slater in the College Football Hall of Fame in 1973. Again, with Slater and Nile Kinnick, he was one of the first members elected to the Iowa Sports Hall of Fame in 1951. He's part of Iowa's all-time football team, selected as a running back joining Ronnie Harmon and Ozzie Simmons.