Matt Gatens isn't done playing basketball yet. His attempt to make an NBA roster this year suffered a crippling blow during Gatens' disappointing stint with the Phoenix Suns' Summer League team (although he did end his time there with a bang, scoring 13 points on 5-7 shooting (3-4 from 3-point distance) in just nine minutes). Luckily, there are pro basketball options outside of the NBA and Gatens joins several recent Iowa players (notably Jarryd Cole, champion of Iceland, and Cyrus Tate and Justin Johnson, earthquake survivors) in going abroad to seek his fortune.

Finalized deal to play in Murcia, Spain next year in the ACB league. Excited for the opportunity!

Murcia is in the southeastern corner of Spain and looks like a lovely place. It's renowned for its agricultural tradition, so an Iowa native like Gatens should feel right at home. According to wiki, two of the most famous individuals to come out of Murcia are Charo (!) and Alberto López Florenciano, who you probably don't know but who has an exquisite (and diverse) description: "pimp/engineer."

As for CB Murcia (or UCAM Murcia), they're... not great. They finished in 15th place last year in Liga ACB, the top division in Spanish basketball. In their history, they've never finished higher than 12th place in Liga ACB. They've also been relegated to the second division of Spanish basketball on five separate occasions, most recently in 2009-10. They're kind of a classic yo-yo team. You probably wouldn't recognize any other names on their current roster, but there are a few familiar faces in their historical rolls, including current NBA standout, Goran Dragić, and a few former college notables (Louisville's Taquan Dean and North Carolina's Shammond Williams).

Interestingly, there's also a bit of a pipeline between Iowa college players and Murcia -- former Iowa State star Marcus Fizer landed there briefly after washing out of the NBA and former Iowa player Jared Reiner also did a short stint there. Hopefully Gatens finds success at Murcia (and is able to help keep them from being relegated next season). Best of luck, Gater -- we'll be rooting for you.

But Gatens isn't the only recent Iowa hoopster to announce that he's heading to España to seek his fortune in a sporting endeavor. Andrew Brommer is also headed to Spain -- Pamplona, in particular. 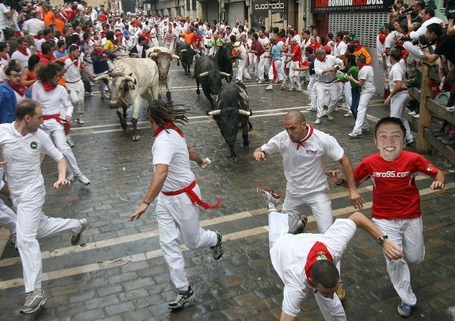 Go get 'em, Brommer! I hope those bulls are ready for a little good old-fashioned American BROMMICIDE. (Shh, no one tell him that this year's Running of the Bulls was a few weeks ago. Or that there's really no way to make money at it.)