It's Not Plagiarism If You Link To It: PTL Recap; Zach Johnson Booted

Share All sharing options for: It's Not Plagiarism If You Link To It: PTL Recap; Zach Johnson Booted

JUST ANOTHER SUNDAY OF PTL ACTION. Again, Brendan Stiles has a recap and several videos. Aaron White had another big game and through four games is averaging 30 points and 14 rebounds. White's efforts haven't helped his team's win total as they are 0-4 in league play. Stiles says that Adam Woodbury played his best game of the PTL. He finished yesterday with 16 points. Fellow freshman Mike Gesell has had no trouble scoring points. He poured in 28 yesterday and added 10 assists for his first PTL double-double.

THERE WILL BE NO ZJS IN THE NORTH LIBERTY GYM UPPER BALCONY. Zach Johnson that is. He stopped by the North Liberty gym to take in some PTL action yesterday. North Liberty officials allow only media members on the upper balcony and they take that rule seriously. Johnson was spotted and asked to leave.

STATISTICALLY, AARON WHITE IS THE FRONT-RUNNER FOR PTL MVP. He once was locked in the Iowa practice facility. His game developed his freshman year at Iowa and it's still getting better. White averaged just over 11 points a game last season. He's working extra hard to avoid a sophomore slump. Per White,

"You've seen people in the past kind of slip their sophomore year instead of get better. I want the opposite of that, just keep growing, keep getting better and keep building this program."

THE HAWKEYES HELD THEIR FATHER/SON HOOPS CAMP OVER THE WEEKEND. The Hawkeye players taught basketball skills to fathers and sons at the inaugural camp. The camp was open to kids from kindergarten to sixth grade. There were several pics that popped up on Twitter. Here's one of Aaron White and a lil' Aaron White. 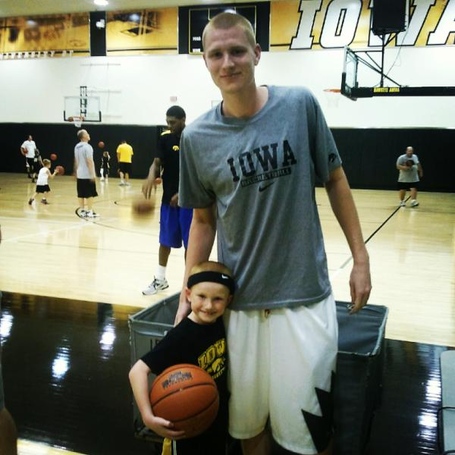 RICKY STANZI SIGNS SOME ART THAT WILL BE AUCTIONED FOR CHARITY. (H/T @Hawkize) 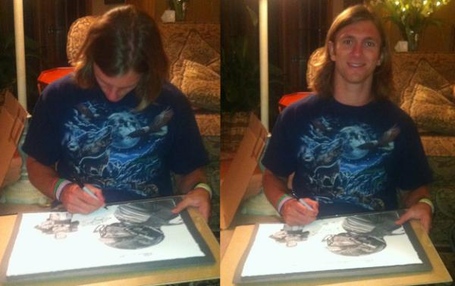 THE GANG IS GETTING ALL TOGETHER. Several of Iowa's 2012 football recruiting class was already on campus participating in summer workouts. Now, it appears most, if not all are planning to be in Iowa City today. Per his Facebook page, Greg Garmon plans to be in Iowa City. Others include C.J. Beathard, Greg Mabin and Laron Taylor.

Off to the next chapter in my life. Excited to see what God has in store for me. I am so thankful for all the people that came into my life.

THE IOWA HIGH SCHOOL FOOTBALL ALL-STAR GAME (SHRINE BOWL) IS NEXT SATURDAY. There are a few new Hawkeyes participating. On the North team is walk-ons Jeremy Nelson, Jalen Chamber and Cole Croston. On the South squad is walk-on Will Kincart and recruit Nathan Meier. Meier will be the one to watch as he's projected for a number of positions at Iowa and will play some running back in the Shrine Bowl.