It's Not Plagiarism If You Link To It: Former Hawkeye SID George Wine Dies

Share All sharing options for: It's Not Plagiarism If You Link To It: Former Hawkeye SID George Wine Dies 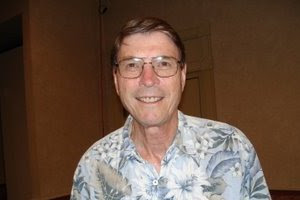 (Image via Ronald Wesley Maly's blog. The link is also to Maly's post about losing a dear friend.)

GEORGE WINE SERVED AS IOWA SPORTS INFORMATION DIRECTOR FROM 1968 TO 1993. He died yesterday of a heart attack. He was 81 years old. He was also the author of the Hayden Fry biography, "A High Porch Picnic." For more information on Wine and his career at Iowa click the link to Dochterman's article. Also, Mike Hlas reached out to Hayden for comment. Here's his piece.

JARROD UTHOFF IS PARTICIPATING IN THE PTL BUT THAT'S ABOUT ALL FOR HAWKEYE ACTIVITIES. Scott Dochterman writes that it's a little awkward for Uthoff. Jarrod isn't taking summer classes so he can't talk to Iowa coaches until he's enrolled in the fall. Dochterman notes that even Iowa players are a little reluctant to talk about Uthoff and his play this summer.

THEY BATTLED ON THE PTL COURT LAST WEEK AND COULD BE BATTLING FOR MINUTES THIS WINTER. Everyone is excited about Adam Woodbury's Iowa basketball career. Perhaps forgotten is second-year center Gabe Olaseni. Rick Brown wrote about the two Hawkeye centers. Woodbury told Brown, "Gabe and I are close. We don't hate each other. It will be a fun battle. We'll see what happens."

BRENNER WRITES THAT OLASENI IS READY TO CONTRIBUTE. Melsahn Basabe had praise for his teammate. Basabe told Brenner, he(Olaseni)'s a pro. Pro ability." In May head coach Fran McCaffery said Olaseni was the most improved player. Thus far, in a few PTL games, it appears Fran wasn't pulling our chain.

HAWKMANIA'S AARON BRENNER SAYS "GIVE THE KEYS TO GESELL." Brenner has taken in some PTL action and says Gesell, not Marble or White, will be Iowa's most important player next year. Gesell is averaging 22 points and six assists in the PTL pick up basketball league. He'll be Iowa's starter from day one at point guard and as Gesell goes, so go the Hawkeyes.

REMEMBER THE MARBLE NBA TALK? The kid has goals, no doubt. Scott Dochterman writes about how Roy Dev works hard everyday to improve his game and someday reach those goals. About the NBA, his dad told Doc,

"We've been talking about it for a while now. We're just making sure he keeps his eyes straight ahead and stays focused and worries about Ohio State, Michigan and Michigan State, and we agreed to that."

"There's no question the phone will probably ring, and I know so many people in the business that that's the general consensus (a good year means he'll declare for the NBA draft). I'm not saying he's gonna go but it's just, why run away from it? It's going to stick there. If you continue to play the way you are, the NBA's not going to wait on you. They're going to call."

IT'S ALMOST TIME FOR THE MANY, MANY WATCH LISTS. Micah Hyde and Tanner Miller are named to the College Football Performance Awards (CFPA) Defensive Back Trophy Watch List. Keenan Davis is a Blue Ribbon preseason all-conference honoree.

BLACK SHOE DIARIES WANTS TO STUDY A POSSIBLE BIG TEN NETWORK BIAS. There's a month of data analyzed in this BSD post. Their breakdown puts Iowa in the middle with 82.5 hours of programming over the course of June. Ohio State led the way with a whopping 153 hours of programming. In last is Nebraska with only 27.5 hours.