It's Not Plagiarism If You Link To It: Can You Feel It? Football Is Almost Here

Share All sharing options for: It's Not Plagiarism If You Link To It: Can You Feel It? Football Is Almost Here

AND FOOTBALL NEWS WE HAVE. First, if you missed any of the news from Big Ten media days check these links for the timeline (Thursday | Friday). Mike Hlas and Marc Morehouse, both of the Cedar Rapids Gazette spent some time with Kirk Ferentz on Friday. Ferentz talked to Hlas about his son Brian. Hlas also talked to James Vandenberg. Morehouse talked with Ferentz about social media among other things.

FRIDAY, WE LEARNED OF SOME NEW NAMES ON IOWA'S ROSTER. Former Hawkeye Chuck Hartlieb's son Dan is one of those new names. Hartlieb joined Iowa as a walk-on quarterback. He played at Dowling Catholic High School in West Des Moines, Iowa. Here are his Hudl highlights.

Finally, Iowa added Sean Skradis from Iowa Western Community College. He played quarterback at IWCC but will join the Hawkeyes as a defensive back. He's originally from Kennesaw, Georgia and boasts a 4.6 40-yard dash. Here is a YouTube of Sean playing QB.

FOR SUCCESS IN 2012 WE NEED TO USE A CLICHE FROM LAST YEAR. Iowa needs "good stories" to emerge. That's not the first time we've read/heard that. But it's true. Is there a Ramon Ochoa on this team?

ABOUT THOSE BILLBOARDS. Randy Peterson asked Gary Barta what he thought about little brother's AD Jamie Pollard placing "Welcome Home Bob" billboards around the state. Barta said, " It's not very high on my things to worry about." Sick burn. 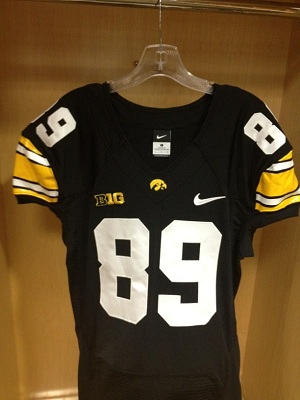 CHIEFS CAMP IS OPEN AND RICKY STANZI HAS BEEN TOO BUSY TO ENJOY THE OLYMPICS. Stanzi told Arrowhead Pride that not getting to watch on TV is "nerve wracking," but he does appear to have a smart phone. Stanzi's favorite Olympian is Michael Phelps.

MIKE DANIELS IS BACK FROM INJURY AND COMPETING IN PACKER CAMP. Packer News is excited he's ready to go. Daniels had a scary incident when fellow rookie Mike McCabe was injured in a drill.

MARVIN MCNUTT IS MOVING UP THE DEPTH CHART. McNutt's main competition at wide receiver with the Eagles, Riley Cooper, broke a collar bone in practice. Cooper will be out at least six weeks and that means Marvin's opportunity is now. McNutt is working with the second team offense.