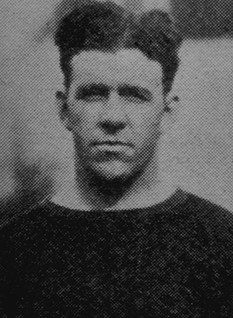 Gordon C. Locke (August 3, 1898 - November 9, 1969) was a native of Denison, Iowa. For the Hawkeyes he was a two-way player from 1920-22. He played defensive back and was part of an offensive backfield that included Aubrey and Glenn Devine.

In 1921 Locke was a consensus all-Big Ten (formerly Western Conference) selection and was named all-American in both 1921 and 1922. He paved the way for Aubrey Devine but himself accounted for many Iowa scores. Locke would score the game's only touchdown in a 10-7 win versus Knute Rockne's Notre Dame team in 1921. Rockne said following the game, "we had heard so much about Devine, but the guy who hurt us the most that day was Locke."

Locke racked up 202 rushing yards in a 14-2 victory over Illinois, an Iowa record. He'd suffer from stomach problems the rest of 1921 that limited his playing time the rest of the season. He still was credited with over 700 yards rushing and finished behind teammate Aubrey Devine in conference scoring.

The Devines graduated from Iowa following the 1921 season. In 1922 the team looked to Locke to carry the offense and captain the team. Although Iowa had lost the conference scoring leader in Devine they still had "one of the best fullbacks ever seen in the West."

Locke scored a touchdown in Iowa's 8-7 win over Illinois. He had two touchdowns against Purdue, three touchdowns against Minnesota, another two against Ohio State and four against Northwestern. He recorded 96 points total, 72 points in conference play. A Big Ten record that stood until 1943. 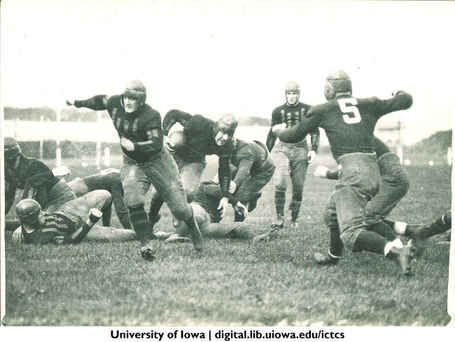 Gordon Locke would end his career at Iowa with 32 total touchdowns to his credit. He joined Lester Belding and Aubrey Devine as Iowa's third consensus all-American. Despite being 5'10" and 165 pounds he finished his career with over 400 carries as a fullback.

"He made no particular play which might be singled out as superior to any other; it was merely a case where a man's work was so outstandingly good, so smooth, so finished, so effective, so overwhelming, that one must take the job as a whole."

Not only was he an outstanding athlete but he also excelled in the classroom. Gordon earned a Big Ten Medal for scholastic and athletic achievement and went on to graduate in the top three of his class at UofI Law school.

Following Iowa he divided his time as a football coach and practiced law in Ohio. He became the head coach of Western Reserve University from 1926-1930. Locke later moved to Washington D.C. to practice law until his death in 1969.

Previously in this series: