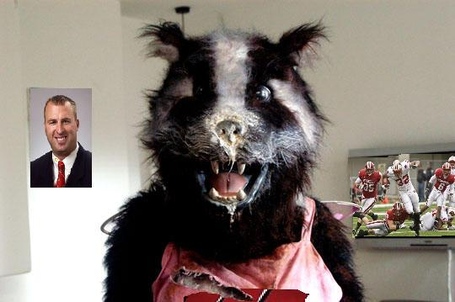 MADISON, WI (AP) -- Beloved Wisconsin Badgers mascot, Bucky Badger, will have a bold new look this coming season, thanks to a dramatic re-design of the furry entertainer. "We just felt it was time for something a little fresher and more modern," said University of Wisconsin athletic director, Barry Alvarez. "The old Bucky Badger look was good, but it was starting to look a little dated. Who even wears sweaters like that anymore, you know?"

Alvarez said that Wisconsin officials wanted something "edgier," as well. "No offense, but the old Bucky was just a little too nice-looking. He looked like a friendly little critter you'd find at a petting zoo. Have you ever seen a real badger? Pardon my French but they're [bleep]ing mean sons of [bleep]. They will tear your [bleep] arm off if you try to pet them. Under Coach Bret Bielema, our football program has enthusiastically embraced an attitude of aggressive modernity with a complete disregard of the so-called 'unwritten' rules of college football. Going for two on a supposed rival when you already have a 25-point lead with six minutes to go? Scoring 80 points on an overmatched opponent just because you can? That's the sort of take-no-prisoners, 'to hell with social niceties' approach to modern life that Wisconsin football embodies, and we thought we should expand that approach to Bucky Badger."

When asked how Bo Ryan and the Wisconsin basketball team, with their plentiful buzz-cuts, patent disregard for pace of play, and outright contempt for the shot clock, fit into this bold new ethos, Alvarez reddened and began squirming awkwardly. "Well, not everyone in the athletic department is as... enthusiastic about our new direction, but I'm confident that in time that we'll all be on the same page. Plus, as long as Coach Ryan keeps winning 20 games a year and going to the NCAA Tournament, he's pretty much impossible to fire."

Alvarez also noted that there were non-football reasons for Bucky Badger's extreme makeover. "This isn't really in my wheelhouse, so to speak, but did you see the Princeton Review's new party school rankings? Fourteenth? [Bleep] fourteenth? Pure and simple, that sort of ranking is just totally unacceptable in Madison. Madison used to be the crown jewel of Big Ten party schools and it's shameful that we've now fallen below Iowa City, University Park, and [bleep] Champaign. Champaign, for [bleep] sake! We needed to send a signal that Madison is still a rocking party town, a place where it's totally acceptable, if not downright required, to get blackout drunk every weekend and where recreational drug abuse among students is as expected as Coach Bielema poaching his new starting quarterback from an ACC team each spring. We feel that the new-look Bucky Badger does just that."

Not everyone is as enamored with the new Bucky Badger, though. Several Madison-area parents reported that their children began screaming upon seeing the fuzzy new mascot, with many of them noting that their children had been unable to sleep without being tormented by nightmares of the new Bucky attacking them and devouring their entrails in a coke-induced murder binge. Anti-drug advocates in Madison were also opposed to the redesigned Bucky Badger, noting that "he aggressively promotes the use and abuse of illegal drugs," and that "his snout is practically dripping cocaine." Wisconsin officials had no comment when informed of their complaints.