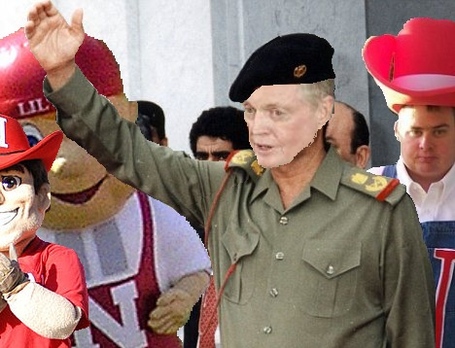 Nebraska officials say former coach Tom Osborne has won 52,000 votes in a referendum on whether he should enter the SB Nation College Football Hall of Fame. There were 69,000 "eligible voters" - and nearly every one of them voted for Osborne, according to Harvey Perlman, Vice-Chairman of Nebraska's Revolutionary Command Council.

Nebraska and Corn Nation insist the count was fair and accurate. Voters had been urged to show their support for the Nebraska coach and athletic director in defiance of the voters for other candidates, candidates who were far more worthy of such an accolade by virtue of not using criminals to win national championships. During polling, many voters trampled Iowa flags, and some signed their ballot-papers in their own blood in a display of loyalty to their leader; also, because they've never used a computer before and don't know what those squiggly lines on the keys are for.

Even before the votes were finally tallied, everyone had dismissed the referendum as a farce after Osborne tallied 42,000 votes between 1:00 a.m. and 6:00 a.m. Central Time early Sunday morning, when quite literally every Nebraska fan ever was asleep. "Obviously it's not a very serious day, not a very serious vote and nobody places any credibility on it," an SB Nation spokesman said on Sunday. 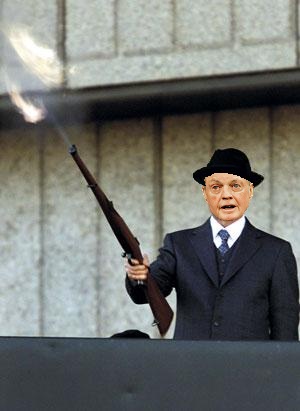 In Iowa City, Black Heart Gold Pants painted a stark picture of the "choice" facing the hall of fame voters: "You can't have free elections when the electorate goes to the polls in the knowledge that one candidate is going to steal the election, that candidate having routinely stolen other elections, like half of the 1997 national championship, to say nothing for the fact that he quite literally used guys who steal stuff to win the 1995 national title."

But Corn Nation said the Hall of Fame election should not be compared to the other elections Osborne inexplicably won. It wasn't chicanery that led to the absurd result, a spokesman said. It was "divine intervention," he insisted, before accusing BHGP of deceiving voters about Osborne's credentials. "Christian Peter was only convicted of, like, six of the violent crimes he was arrested for."

"Those people are living in the past," he added. "They shouldn't look at things that happened back in 1994. That stuff is irrelevant. They should just find the guy with the most national championships and cast their vote in this Hall of Fame thing that we made up because we wanted to bitch about Tommie Frazier again. Because that is what we should be talking about today."

"TOMMIE FRAZIER GOT SCREWED," the Corn Nation spokesman then shouted, before insisting his opinion was more important than anyone else's because he is "One of the Greatest Football Fans in the World". The spokesman closed by claiming Osborne had received over 95% of the votes cast. When later notified that his math was incorrect, the spokesman admitted, "Hey, math is hard for me. It's not like I graduated from an AAU-member school or anything."

Osborne declined to comment on the results of the vote, saying he was too busy making anagrams out of his favorite phrase: "Barry Switzer owns my white ass."