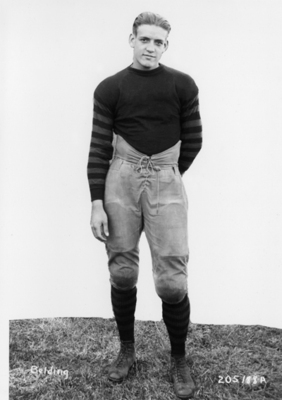 It seems, at times, that Iowa's football history begins with Nile Kinnick. With good reason, Kinnick is perhaps Iowa's most famous football player. He was a Heisman Trophy winner, a military hero and the University of Iowa's football stadium is named after him. Iowa's football program was first organized in 1889, 50 years prior to Kinnick and the season of "Iron Men." While the game was certainly different there were several Hawkeye heroes that wore the black and gold in those 50 years prior to 1939.

There was a 7-0-1 season in 1900 but Iowa's first true undefeated and untied seasons were 1921 and 1922. Those are the teams being honored by Iowa when they take the field against Iowa State in this year's home opener. Much has been made about the style of uniform Iowa will wear in that game. We'd like to move the conversation towards discussing the men being honored. There are Hawkeye legends that coached and played on those teams. Legends like Howard Jones, Lester Belding, Duke Slater and Aubrey Devine.

The first player in this series is also the first ever All-American football player selected from the University of Iowa. Lester Belding (December 5, 1900 - May 27, 1965) came to Iowa from Mason City, Iowa, where he was born and raised. There, he'd play high school football with future Hawkeye football coach Dr. Eddie Anderson. He'd enroll at Iowa in 1918 and because of freshmen eligibility rules would wait until 1919 to show Iowa fans his abilities.

It was that season, 1919, Belding earned first team consensus All-American honors and All-Big Ten playing the end position. Belding would earn all-conference honors all three seasons he played football at Iowa. He also was named the captain of the Iowa track team and would compete in the 100 and 200 yard dash.

Statistics weren't recorded and analyzed endlessly as they are today. In fact, through research, it appears that individual stats weren't recorded until 1936ish. The game was still evolving as early formations typically resembled Rugby and the forward pass was just over ten years old. We don't know how many interceptions Belding had for the season in 1921 but we do know he had two that came against high school teammate Eddie Anderson and Notre Dame. The Irish were riding a 20 game win-streak and Iowa defeated Knute Rockne's team that day 10-7 (there will be more on this in the following weeks).

Belding played both ways as an end. In 1921, against the Minnesota Golden Gophers, he caught two touchdown passes in a 41-7 rout. This wasn't modern day Minnesota football. The loss was the worst in Gopher history to that date.

It's hard to imagine what life was like in 1920. Attending college was certainly a great opportunity for the men that made up Iowa's football team. There should be no surprise that after college these men went on to accomplish a great many things.

Following his football days at Iowa Belding would play professionally with the Rock Island Independents for one game in 1925. (The Independents are one of the NFL's first teams). Belding played with Jim Thorpe with the Independents against the Green Bay Packers. The Packers won 20-0.

Belding would become a prep football and track coach following graduation. He'd also coach college football at North Carolina (freshman team) and spend time as the athletic director and basketball coach at Dakota Wesleyan College. His final stop was at North Central College where he'd spend 20 years coaching track, football, and serve as Athletic Director. He was inducted into the NAIA Hall of Fame. He was also inducted into the University of Iowa Athletics Hall of Fame in 1991.