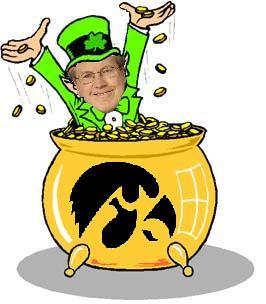 3:07pm EDIT: I updated some of the dollar figures and added a section at the end after getting to see the full contract, which you can see here.

It doesn't come as much of a surprise -- Iowa athletic director Gary Barta mentioned during the spring I-Club circuit that he was working on a renegotiated contract with Fran -- but today it became official: Iowa basketball coach Fran McCaffery is gettin' paid:

The seven-year agreement guarantees McCaffery a minimum average of $1.66 million annually over the length of the contract, beginning with a base salary of $1.3 million in 2012-13. The base salary moves McCaffery to the upper half of the Big Ten Conference in comparison to his colleagues.

In addition to McCaffery's success in 2011-12 -- he led Iowa to its first winning season since 2006-07 and first postseason appearance since 2005-06 -- the salary floor for Big Ten coaches has risen in recent years. Nebraska hired Tim Miles on a 7-year deal worth $1.4 million per year, while Illinois hired John Groce on a 5-year deal worth $1.4 million per year. Both deals are more than McCaffery was making at Iowa ($1.15 million per year) prior to this new contract -- and neither man arrives with any experience as a major college head coach.

In fact, the Gazoo broke down the salary scale for Big Ten coaches earlier this spring:

Based on the figures reported in Fran's contract (again, available here), the Iowa SID may be fibbing a little when they say that he's now in the upper half of the Big Ten in comparison to his coaching cohorts. His base salary this year is $750,000, with a total annual guaranteed income of $1.3 million. Unless the other Big Ten coaches are getting paid a whole lot more in outside income, it's hard to believe that a base salary of $750K is enough to put him in the upper half of Big Ten coaches. And, hell, his overall annual guaranteed income this year -- minus incentives -- still appears to be less than guys like Miles and Groce are making this year. (If you're keeping score, it's also very similar to the new contract that Fred Hoiberg signed with Iowa State earlier this year: an 8-year deal worth an average of $1.5 million/year.)

Then again, I think you can argue that this new contract hasn't done much to change expectations re: the Iowa basketball job. Making regular trips to the NCAA Tournament has been one of the expectations for decades, ever since Lute and Raveling and Dr. Tom set the bar there. Alford's departure was strongly tied to his lack of NCAA trips (3 in 8 years at Iowa) and Lickliter was shown his walking papers in part for making an NCAA Tournament trip seem like an absolute pipe dream. The reality is that whether Fran is making $1.1 million/year or $1.6 million/year is mostly irrelevant in terms of his job security: the expectations haven't changed -- Iowa needs to be contending for NCAA Tournament berths on a regular basis. That doesn't mean that they have to make it every year -- and it doesn't mean that they have to make it this year -- but they need to be in the hunt. So far, Fran seems capable of doing just that Iowa... and now he's going to be a little better compensated for his efforts.

If you're wondering what happens if the Fran-Iowa marriage goes sour... Fran gets $4 million if he's fired this year (assuming it's not "for cause), with that number being reduced by $250,000 each subsequent year. Fran owes Iowa $2 million if he leaves for another job this year, with that number also being reduced by $250,000 each subsequent year. So yeah: both parties are in this marriage for a while. Barring something truly crazy happening (remember: throwing chairs is not yet a major NCAA violation), it would be pretty expensive for either party to get out of this agreement in the next few years.