What if Mark Ingram Had Gone To Iowa Instead Of Alabama?

Share All sharing options for: What if Mark Ingram Had Gone To Iowa Instead Of Alabama?

This is a sponsored post. Not to bore you all with the details of how the sausage is made, but our goal with sponsored posts, nine times out of ten, is to do a post that's (for the most part) the sort of thing we would write about even if it wasn't being sponsored. Sometimes we succeed, sometimes we don't -- so it goes. In this case, the sponsor in question is NCAA Football '13, the most recent iteration of EA Sports' wildly popular video game. I've been playing it, year in and year out, since NCAA Football 2003 (we did full years back then, whippersnapper, and fought the Kaiser because it was the right thing to do, dammit) so it's not exactly twisting my arm to get me to write about something related in some way to the game.

This year their big push is around the Heisman, specifically the ability to put former Heisman Trophy winners on your dynasty rosters. This has led to advertisements with all kind of unholy abominations like Tim Tebow on Georgia or Eddie George on Michigan. There are all kinds of fun, wild fantasies we could have with Iowa -- Bring on Barry Sanders! Pony up for Cam Newton! Give me Gino Toretta! (wait, no one's saying that) -- but I am at heart a simple man with simple fantasies* so I decided to go with a more conventional What If? scenario -- what if a former Heisman Trophy winner who had actually strongly considered going to Iowa had... actually gone to Iowa? Who was that mysterious Heisman Trophy winner from days gone by? One Mark Ingram, who won the award in 2009**.

* This is not true, but for the purposes of this post we're going to assume that it is true.
** I think it would technically be more accurate to say that he is adversely possessing Ndamukong Suh's Heisman Trophy for 2009, but I digress. 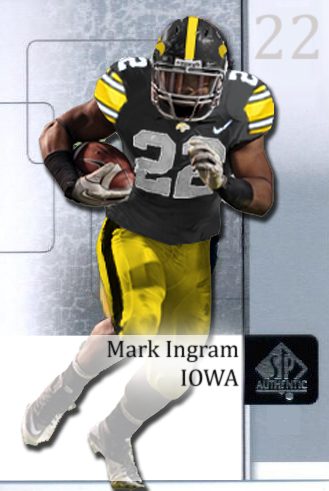 (A big hat tip to Horace for helping out with this image, too.)
(Lots more fantasizing after the jump!)

Ingram, of course, went to Alabama, where he was eventually part of a two-headed behemoth of a running back platoon (alongside fellow tree trunk-legged footbrawler, Trent Richardson) that went on to lay waste to the SEC and claim a national title in 2009 (they were thwarted from a national title shot in 2008 by Tebow, then got their revenge by making him cry in '09). Ingram was very, very good at 'Bama -- he ran for 3200+ yards and 42 TDs in three seasons of work there, peaking in 2009 with the 1658 yard, 17 TD campaign that earned him the nation's most famous bronze stiffarm paperweight.

But back in the winter of 2007, before Ingram became Nick Saban's bulldozer, he was a high school senior choosing between a handful of schools: Alabama (on their way back to greatness under Saban), Michigan State (the school his father, Mark Ingram Sr., had attended), and Iowa. Iowa was either his second or third choice, and ultimately he landed in Tuscaloosa. But what if fate had sung a different song back in the winter of '07 -- what if Ingram had decided to take his talents to Iowa City?

Imagine, if you will, a two-headed running back attack in 2008 comprised of Shonn Greene and Mark Ingram. Greene's real understudy in 2008, Jewel Hampton, wound up with pretty solid stats that year -- 91 carries, 463 yards, and 7 TDs. (Greene, of course, went bonzo gonzo and had the best year ever for an Iowa running back: 307 carries, 1850 yards, 20 TDs.) No offense to Jewel, but Ingram was just a bit better as a college running back (even as a true freshman) than Hampton. The idea of him running behind the '08 offensive line and at defenses that have already had to deal with tackling Greene for 20-25 carries a game... drool.

Then again, does having Ingram as Greene's complement instead of Hampton flip any results? Hard to say. I'm not sure it changes much against Pitt (where the main problem was Ferentz's stubborn decision to sink or swim with the H.M.S. Christensen) or Michigan State (where turnovers and a costly fourth down stop killed Iowa) or Illinois (where, again, turnovers were a major culprit in Iowa's defeat)... but the loss to just Northwestern lingers for me as one that might have gone differently. That game turned in part on a (coughcoughillegalcoughcough) hit that knocked Shonn Greene out of the game and ultimately forced Iowa into a pass-heavy offense for the remainder of the game. Iowa fell short on four straight incomplete passes from first and goal. Might Iowa have tried to run the ball a bit more (remember, they had time to do so -- the clock wasn't a huge factor in that game) if they'd had Ingram to step in for Greene? Perhaps. Or perhaps not: that game was still early in the season and Ingram would have been a true freshman himself -- it's hard to know how much faith Ferentz would have had in his abilities. So ultimately maybe 2008 goes about the same way it really did -- several frustratingly close losses, several blowout wins, and a team that was peaking by the end of the season.

But what about 2009? Let's assume Greene again declares for the NFL, leaving a void at the starting RB spot for Iowa. In real life, we tried to fill that void with the tag team of Brandon Wegher (a slightly undersized true freshman) and Adam Robinson (a slightly undersized redshirt freshman) after AIRBHG struck Hampton down with a knee injury during the off-season. The results were... frustrating, to say the least. (Iowa ran for 1485 yards total that year, with a ghastly 3.3 ypc average.) But what if Iowa had Ingram in reserve, waiting to fill Greene's (admittedly very large) shoes? I'm not going to say that Ingram duplicates Greene's 2008 season, but if he even does two-third of what Greene did (1233 yards, 14 TDs)? That's pretty damn good.

In real life, Iowa used smoke and mirrors (and a hellaciously good defense, plus some timely offense from Stanzi & Co.) to grind out one of the more improbable 11-2 seasons in program history. I have a hard time seeing how Ingram's presence turns any of those 11 wins into losses (it's not like any of the 11 wins really hinged on big performances from Wegher or A-Rob), and it's tantalizing to wonder if his presence might have been the difference in Iowa's two losses. Does having him around against jNW settle Vandenberg's nerves enough to allow Iowa to eke out a win? That seems plausible. Could he have made the difference in the OT nail-biter against Ohio State the following week? Maybe. Might Mark Ingram have led Iowa to the Rose Bowl or (dare to dream!) the BCS National Championship Game (coincidentally, also at the Rose Bowl that year)? It doesn't seem completely far-fetched.

As for 2010... oh, who cares, I'm still buzzing off the notion of Iowa playing in the goddamn Rose Bowl at the end of the 2009 season. WOO PASADENA. (But I think Ingram is good enough to help Iowa avoid at least one or two of those five awful losses in 2010; don't ask me which ones, though.)

This post was sponsored by EA Sports NCAA Football 13. Check out the video for the game below.