Share All sharing options for: Chik-Fil-A Is Still Just a Chicken Sandwich 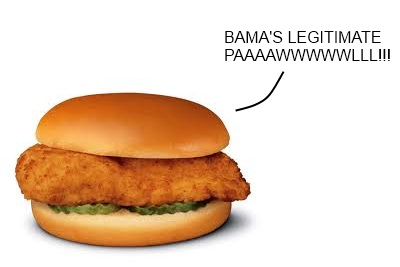 I lived in Davenport, Iowa for a few years, and there was a Chik-Fil-A at the mall. Given the reverence reserved for it by some of our respected Southern bretheren -- a level of Dixie reverence usually reserved for things like Toby Keith and secession -- I was excited by the mere prospect of sober Chik-Fil-A consumption (I'd had it a couple times while drunk in Florida). I went to the mall, ordered the chicken sandwich combo, took a seat, took a bite.

It's a chicken sandwich with pickles. That's it. There is absolutely nothing special about it whatsoever. It's a bit dry, actually. A bit stale. The breading was KFC-level mediocre. The waffle fries were competently made, but far from transcendent. The entire experience could only be described as underwhelming. We have a Chik-Fil-A in Des Moines, and the thought of going there for a sandwich has never crossed my mind. Some may have to drive 200 miles for it, but you could drop a Chik-Fil-A franchise in my living room and I wouldn't eat there more than once a month. Perhaps you'd like a breaded sandwich made from an animal that tastes like something? I can bring you some pork. I'll bring you some pork.

Also, congrats, SEC fans: In your reflexive need to react against carpetbagger Yankees with torches and pitchforks, you just inadvertently stuck up for the BCS and placed Jim Delany -- JIM DELANY, PEOPLE -- on the side of Dan Wetzel and the other BCS antagonists. He might be the defender of the Rose Bowl, but you have become the defenders of a status quo that everyone uniformly hates.

Delany has advocated a system where conference champions would be eligible for the playoffs, a proposal that drew immediate ire from people like Nick Saban who want "the best four teams," whatever that is. Delany's point -- and it's valid, regardless of the source; just look at the absurd bubble debate on Selection Sunday in March -- is that at least conference champions earn the right on the field by winning enough games to take their division, then winning a conference championship game. That's more than can be said for the SEC's preferred system, which --stop when this sounds familiar -- would rely on polls and/or some sort of committee to determine who gets in. The Big Ten is advocating a playoff where on-field in-conference performance matters. The SEC is advocating for an extra BCS game and a shift in the eternal debate from who is #2 to who is #4.

The SEC is comfortable with this debate, mostly because is relatively sure it will win by virtue of being the SEC. Despite its Barbarians at the Gates demeanor, the Southeastern Conference actually loves the BCS, because the BCS has been very, very good to them. In 2006, they were successful in lobbying against a Big Ten rematch for the national championship ("BUT WHAT ABOUT THE TEAMS THAT DON'T GET A CHANCE PAAAWWWWLLL"), then vanquished Ohio State. Five seasons later, they pulled one of history's greatest flip-flops to advocate a national championship rematch between their top two ("I'VE NEVER EVEN HEARD OF OKLAHOMA STATE PAAAWWWWWLLLL") in large part because an Oklahoma State win in the national championship would have popped their bubble of dominance just as Florida had burst the Big Ten's in 2006. In the eight seasons of the BCS before Florida's beatdown of OSU, the SEC put two teams in the title game (and LSU's presence in 2003 was despite the fact that USC, the consensus #1 team in the country, was not included in the game because the BCS formula put them behind LSU and Oklahoma). In the six seasons since, the SEC has sent seven teams to the big game. Its most recent winner didn't even win its own division, didn't even play for its conference title. Alabama got in by virtue of being Alabama, a position that the SEC clearly wants carried into the next title format.

It's also a position that the line of drawling heads slowly screaming about Jim Delany want to protect. Make no mistake about it: The "best four teams" system being floated by Nick Saban is nothing more than BCS version 2.0, with polls and computers and ESPN guys babbling incoherently. And when the commentary class and the human polls have so skewed in your favor that your conference's top two teams are, by sportswriter fiat, the nation's top two teams, there is no desire whatsoever for change, and the SEC knows it. The "best four teams" model based on human rankings does nothing that the previous system didn't do, other than allow the SEC to play two "neutral site" games in its own backyard for a national championship instead of one. Any move toward a true playoff, one that brought the best of each conference to the table to determine actual superiority, just allows the Big Ten and Big XII and Pac-12 another chance to get in the tournament and usurp their throne.

SEC Commissioner Mike Slive may wrap himself in the flag of revolution, but a system predicated on the same subjective rankings is anything but progress. The SEC might rail against a plus one, but it's their preferred system that simply adds a round to the current BCS equation as the original plus one system proposed. The SEC might say it's for keeping the regular season important, but it's their plan that would take the regular season LSU-Alabama game and make it completely irrelevant. They might say everyone else is a coward, but it's their conference that won't let the true title unification battle royal that should be a college football playoff take place.

They will tell you it's God's gift to us all. In the end, it's just a chicken sandwich.