It's Not Plagiarism If You Link To It: Celebrate Iowa Day With The BTN

Share All sharing options for: It's Not Plagiarism If You Link To It: Celebrate Iowa Day With The BTN

TODAY IS IOWA DAY ON THE BIG TEN NETWORK. Hawkeye Sports has a table with the BTN's special Iowa programming. There's some good football there, Nile Kinnick, Dan Gable, some wrestling and some field hockey. 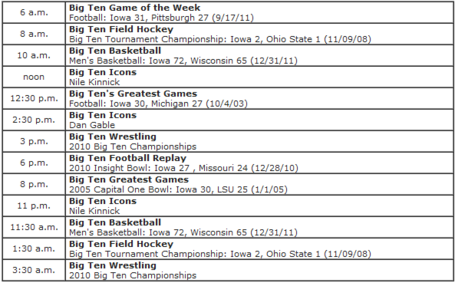 SO, WHERE WERE WE? Let us start at the beginning (or the place when I decided to leave town and participate in my own version of Planes, Trains and Automobiles). Looks like Todd Lickliter will be a head basketball coach again. Lickliter was named the head coach at Marian University, an NAIA school. He was hired from Ball State where he was an assistant. Marian is the same school Todd's son John joined after Iowa. He played sparingly and eventually wasn't part of the team.

ESPN'S BIG TEN BLOG PICKED THE BEST INDIVIDUAL SEASONS OVER THE LAST 50 YEARS. No Hawkeye made their list of five. Brian Bennett had Dick Butkus, Monte Ball, Charles Woodson, Archie Griffin and Mike Rozier on the list. Brad Banks did make the list of players that just missed the cut. He was the only Hawkeye of the 15 players Bennett and Rittenberg selected.

WHERE ARE WE WITH THIS COLLEGE FOOTBALL PLAYOFFS AND STUFF? The Big Ten is in favor of a playoff, kinda. There's still a lot of love for the Rose Bowl. The Big Ten wants a selection committee to choose the four teams that will make up the new CFB playoff. Big Ten commissioner Jim Delany admitted to reading blogs (Hi Jim!) and says he isn't a fan of super conferences. There's been an assumption that a CFB playoff would lead to more realignment. Don't look for the Big Ten to expand until, well, they expand.

HERE ARE LINKS TO MOREHOUSE'S LATEST IN HIS TWO-DEEPS COUNTDOWN. Number 40 on the list, Greg Castillo, is a senior defensive back that seems to have settled into Iowa's nickle back role. Number 39 is a wide receiver that is poised to break out. Don Shumpert has seen very little reps to date but his time is now. Number 38 is an offensive lineman that came to Iowa rated four-stars by Rivals. Andrew Donnal has broken into the two-deeps as a backup left tackle.

THE BIG TEN WILL DISTRIBUTE $284 MILLION DOLLA DOLLA BILLS, Y'ALL. That's to its members. Because Nebraska is new to the conference they still aren't getting a 100% full share yet. Each team not named Nebraska should collect close to $25 million.

JALEEL JOHNSON IS IN IOWA CITY AND LEARNING THE ROPES.

FOR YOU VIDEO GAME NERDS. EA Sports has released its 2013 NCAA Football demos to XBox and PS3. Luke Zimmerman has the team rankings in today's Land-Grant Holyland blog post. The Hawkeyes have an overall rating of 91. Ohio State gets a 95, Michigan a 97 and Minnesota a LOL 77.

LET'S PLAY A GAME, WE'LL CALL IT FIND THE ERRORS IN THIS CYCLONEFANATIC IOWA PREVIEW. And to be fair, I couldn't write an Iowa State football preview if I tried. I think at quarterback they have Johnny Juco and stud Wayne Waukee at linebacker. But, for entertainment purposes, I spot Iowa's new defensive coordinator "Preston Parker" in the opening paragraph. Dominic Alvis' knee injury isn't undisclosed, I mean his torn ACL has been news since last fall. Tanner Miller didn't walk-on but was part of the 2010 recruiting class. It's Mike Meyer, not Meyers, but, overall not too terrible.

LINKS FOR YOUR WEDNESDAY: