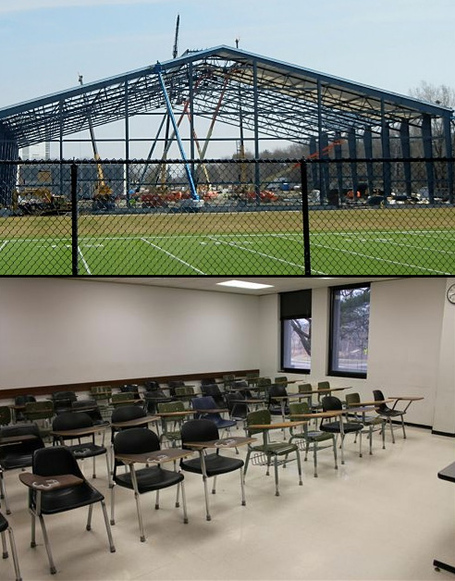 The gleaming new 102,000 square foot University of Iowa football practice facility is nearly complete, and now all that's left is naming every last surface, locker and stick of furniture in the place. That and the bill. Happily the athletic department has hit upon a solution that will solve both problems simultaneously: the department is offering naming rights -- "donor opportunities" in athletic department parlance -- for any individual or group that agrees to meet certain levels of donation. For example, naming rights for the indoor practice facility named run $5 million, the locker room $2 million, the equipment room $500,000, and an individual player's locker a mere $10,000.

Following the football team's lead, the UI Department of Rhetoric announced today that it would be undertaking a similar venture to fund refurbishments to the English and Philosophy Building.

"We were amazed to see how quickly the naming rights were snapped up [at the football practice facility]," said department chair Steve Duck. "Even fairly pedestrian structures such as the assistant coaches room and the position meetings room already have commitments. So we thought to ourselves: why not us?"

The English and Philosophy Building, known as EPB, was built in 1966 and has fallen into a state that students we interviewed described as "dingy", "dank", and "craptastic." The new renovation will change all that, and Professor Duck believes donors will be more than willing to open their pocketbooks.

"I know rhetoric isn't as sexy as football," said Duck, "but what we have to offer is a chance to have your name on a piece of University of Iowa property for a mere fraction of the cost that the football team is asking."

For $619.88, the department will place a donor's name prominently on a new chalkboard. "Unfortunately, our current chalkboards require heavy de-wangification from years and years of freshmen graffiti artists, so we really need to buy new ones. The ones we need cost $619.88, so if you can give us that money, sure, we'll put your name on it. It would also help if you could go to Office Depot and pick it up if you have a van. Because we don't have a van."

Donors can also buy naming rights to any of the 300 new plastic classroom chairs the department hopes to purchase. "The current chairs have already been named, by a guy named Tanner who felt the need to carve "Tanner Johnson is Gay" into over 50 of our chairs with a knife. Unfortunately, all these chairs also require complete de-wangification, so the opportunity is there to award those naming rights again. Just $46.99 for a chair!"

Much of the renovation is devoted to removing the efflorescence of wangs that afflicts the EPB. "Let's face it, not many of our students are thrilled to be taking our classes," said Duck. "Especially at 8 a.m. on a Monday. So they do a lot of drawing to amuse themselves, and nothing amuses them more than crude sketches of male genitalia. As a result we have had to keep the hallways poorly lit in order to mask the presence of several elaborate murals drawn with permanent markers on the first and third floor hallways. For $75, we will rent a sand-blaster, name it after you, get rid of the murals, return the sand-blaster, buy some 100-watt bulbs, name them after you, then get the hallways properly lit for once."

If these prices are too high, the department also has several naming opportunities at lower levels. "The graduate teaching assistants need new cubicle panels, as the ones they currently use have become threadbare and dingy from 50 years of being stained by coffee and tears," said Duck. "I found some 10 year-old ones at a consignment shop for $30 each, but again, you would need to transport them. Because we don't have a van."

Improving the squalid conditions of the graduate students is a major aim of the renovation according to Duck. "New trashcans, kleenex, fluorescent lights that don't buzz, buzz, buzz, buzz incessantly in your ear, driving you mad with every second spent grading inept five paragraph themes, a cup of coffee, a bowl of soup, a chair for the lounge that's not infested with bed bugs -- all of these would dramatically improve the lives of the TAs. And you can have your name on any of them for less than $15."

In a controversial measure, the department has also announced that donors will have the opportunity to name teaching assistants themselves. "Here's one of our new grad students, Rebecca Morningstar. You can name her whatever you want for $10,000 -- Hot Lips, She-Ra, Cindi Lightballoon, whatever you want." The price is high, but Duck adds that donors are not merely purchasing the opportunity to name the student. "These grad students will become your indentured servants for a period of two years. They are great for busting up sod, digging ditches, or explaining the difference between ethos, pathos and logos. You'll get your money's worth."

Renovations have yet to begin, as few of the naming rights have been claimed. "No calls yet," said Duck, "Although someone did leave seventy-five cents under the vending machine. We didn't get their name, but I did honor this generous donor by purchasing a 100 Grand bar and renaming it the Unknown Donor bar. Then I ate the Unknown Donor bar."

The football team also has several naming opportunities available, including the head coach's suite ($3 million), offensive and defensive staff rooms ($750,000 each), and the football administrative offices ($50,000). "It's very important we build facilities where our teams can compete for the best athletes," said UI senior associate athletic director Jane Meyer. "We know how important facilities are to the best athletes. When it comes down to recruiting, we want to make sure we have the facilities that compete within the Big Ten and we believe this facility does."

Professor Duck has a similar attitude toward the importance of facilities to recruitment. "We'll never get students to take our classes if we don't get rid of those possums in the basement."