Share All sharing options for: Caring Is Creepy 2013: So What's Changed?

So the verbal commitment whirlwind has died down -- no commits since Sunday?! FIRE FERENTZ -- but that just gives us a little time to catch our breath and ponder some reasons why things seem so different this year. Iowa has 15 verbal commitments at the moment. Needless to say, this is far more than Iowa's ever had this early in the process. Iowa usually has a handful of verbal commitments by the time Independence Day rolls around; this year, they'd need both hands and one foot to count their entire bounty. So what's the deal?

1) Keeping up with the Joneses 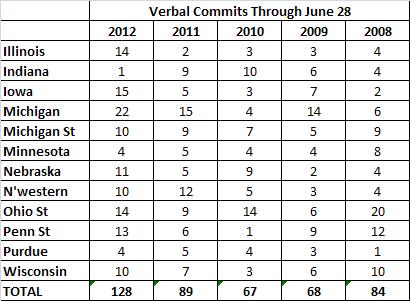 The biggest reason is just that the process itself is speeding up. Recruits are making their decisions (or, rather, their initial decisions -- let's not forget that none of this is final until they sign on the dotted line in February next year) sooner and sooner. The table above doesn't show a steady climb -- there was a slight explosion in 2008 (mainly due to Ohio State's whopping 20 early verbals) before things died down a bit in 2009 and 2010 -- but the overall trend is still towards more and more early verbals and quicker and quicker decisions.

As we see above, Iowa has 15 early verbals (2nd most in the Big Ten, behind Michigan's 22), but all but three schools (Indiana, Purdue, and Minnesota) have at least 10 early verbals. (Whatever Kevin Wilson is selling in Bloomington right now clearly isn't finding a lot of interested buyers.) As Morehouse noted in an article last week:

For proof of the increased speed of recruiting, in April, six of Rivals.com’s 11 five-star recruits had already committed. More than half the Top 50 prospects were committed. Of Rivals’ Top 100 prospects, 52 had made pledges.

Ferentz himself says the process is just moving faster and faster:

"I think everything is moving faster and kids are making their minds up quicker," Ferentz said. "Everything is driven by the recruiting industry right now. The awareness for younger people, it’s continually growing."

2) A new philosophy among Iowa coaches

There also seems to be a bit more urgency being pushed in the message from Iowa coaches to recruits, judging by some comments OL commit Sean Welsh made after pledging his commitment to Iowa last week.

"Coach [Brian] Ferentz told me that they were heading toward wrapping up their recruiting and I had until today to get my spot and after that it was open game on the offensive line," Welsh told HawkeyeReport.com. "It might have pushed me along a little bit, but I knew Iowa was the place for me."

In years past, Iowa coaches often seemed to take a very low-key, minimal pressure approach to recruiting, encouraging recruits to take their time with the process and really explore their options thoroughly. That thinking seems to have shifted. Is that good? Bad? Hard to say -- but it's definitely a change from the way things were. (I also wonder if it means we'll see Ferentz back off on his firm stance about not allowing "committed" recruits to let their eyes wander to other programs via on-campus visits; it would be a touch hypocritical to increase the pressure on recruits to commit, but then cast them aside if they decide they didn't have enough time to evaluate all of their options.)

One of the better tidbits Rivals provides is the name of the "lead recruiter" for each verbal commit. Obviously, recruiting isn't a one-man job -- the entire staff plays some role in signing every recruit -- but it's still an interesting way to look at how individual members of the staff are doing when it comes to recruiting. Here's the current breakdown for Iowa:

From a recruiting standpoint, the hiring of Brian Ferentz already seems to be paying pretty big dividends -- he's credited as the lead recruiter for three of Iowa's recruits and seems to be winning over recruits quickly. Among all of the hullabaloo surrounding Iowa's staff shake-ups, one move that went somewhat underreported was the decision to make Eric Johnson the full-time recruiting coordinator for the program. Previously, he did that job part-time and also handled the tight ends. While he's still expected to be doing some coaching during the season, his primary focus now is on recruiting -- and he seems to be doing quite nicely.

Johnson and Ferentz are two of the youngest members of the Iowa staff (along with LeVar Woods) and it seems unlikely that it's mere coincidence that they've been two of the most successful recruiters on Iowa's staff this year. (Of course, Reese Morgan, who is decidedly not young, has also done pretty well, though he has the advantage of claiming the state of Iowa as his home region, which gives him a bit more of an "in" with the average recruit than the other guys.) Maybe Iowa would be having this same level of success in recruiting if the staff had remained unchanged from a year ago... but I'm skeptical. The new blood Ferentz has brought onboard (or promoted, in some cases) definitely seems to have energized the program -- and recruits. Which is good news, because selling a program that's gone 15-13 15-11 over the last two years probably isn't the easiest thing in the world to do.

Unless you've got Phil Knight footing the bill for your pleasure palaces (a la Oregon) or you're loading up your facilities with iPads and "hallways you can walk through!" (a la Nebraska), I don't think facilities alone sway the minds of many recruits. Athletic facility spending/refurbishing is an arms race in college athletics, but the end result in most cases is going to be détente -- if everyone has shiny, top-of-the-line facilities, how's anyone supposed to stand out and impress recruits?

That said, the new facilities (particularly the indoor practice facility) do look quite nice and they can be an effective part of the "not the same old Iowa" pitch that we're selling with the new coaches. The facilities themselves may not sway a recruit by themselves -- I doubt any of Iowa's recruits were saying "hell no" to Iowa when it was just the Bubble but are now all-in with the new facility -- but with the facility and the coaches, there's a sense that there's something new and exciting about Iowa. Which, again, is much-needed when you can't exactly fall back on on-field results as a rousing sales pitch. ("Woo, we've lost to Minnesota two years in a row!" "Come to Iowa and play for several rivalry trophies -- and lose 'em all!")

One theory that's been brought up in several places is the notion that Ferentz has put a greater emphasis on recruiting now to get it mostly handled by the time the season rolls around. With several new coaches -- and two new coordinators, in particular -- and several new faces all over the team (most critically along the offensive and defensive line), this looks like a team that's going to need every bit of coaching that it can get during the season. Of course, Ferentz kind of rubbished this idea during his interview with Morehouse:

Ferentz dispelled the thought that Iowa is hurrying recruiting to be able to allow the coaches to focus their attention on the field this fall, particularly with two new coordinators.

"I think that’ll be a good byproduct, but that just means we’ll be shifting more quickly to juniors, we’ll be scrutinizing them more," Ferentz said. "Also, we’ll have to continue to recruit the guys who are committed because that is non-binding. I wish I could say that was the case."

In many ways, he's right, of course -- they won't be "done" recruiting any of the guys who have verbaled now until they send in their signed faxes on Signing Day in February and it will be time to start thinking about the Class of 2014 before we know it -- but... it still seems like there ought to be a little more time for the coaches to just worry about coaching and the opponent of the week. And that could be very useful in a season where, like I said, they're probably going to need to do a lot of coaching.

There are several conclusions we can draw from this bold new approach to recruiting.

* Less room for late additions. Iowa has typically added several recruits in December, January, and February (13 in 2011, 11 in 2010, 3 in 2009, 7 in 2008, etc.), but barring some serious attrition in this class, that won't be the case this year. Ferentz expects to sign around 20 players in this class, which means there's room for just five more new faces. That means less room for guys that fly under the radar until their senior seasons.

* Less willing to "hide" guys. There's often been speculation that Iowa has delayed offering a recruit in order to prevent other programs from jumping into the fray. (The most famous recent example is Micah Hyde, who is allegedly a recruit Iowa coaches kept in their back pocket until close to signing day because they didn't want programs like Wisconsin to come sniffing around him.) Whether or not that was ever true (there's certainly been a rather high number of commits over the years who coincidentally got Wisconsin offers very soon after they received an Iowa offer), it doesn't seem to be true any longer -- Iowa seems to be offering (and accepting) kids sooner and sooner in order to keep up with recruiting's new world order.

* Are these really the best guys? (i.e., the Texas problem) Just because a guy will commit early doesn't mean he's the best possible player you can sign. For several years, Texas finished off 75% of their recruiting in one fell swoop at a camp shortly after Signing Day in February when they brought in several juniors and offered the ones they liked best. It being Texas, most of the players jumped at the offer, which is you would often see Texas with a dozen or more verbal commits even before bars started announcing St. Patrick's Day drink specials. The downside to that approach is that the most commitable recruit isn't always the best recruit; after the National Title runner-up season in 2009, Texas slipped into a funk from which they've yet to fully emerge and one of the reasons levied by several observers is that the talent level just wasn't there. Would Texas have been better off to take their time in recruiting and really study recruits instead of just bringing in all the 4-5* kids in Texas and offering them? Maybe, maybe not. (They did slow things down a little bit this year; they had only nine verbal commitments by the end of February. Hey, it's still Texas.)

But there's definitely a risk factor involved in offering (and accepting commits) from players so early in the process. Having more data usually helps make better, more well-informed decisions, but that's hard to do when you're sending out offers long before a recruit has even finished his junior year. Of course, this genie is already out of the bottle and good luck getting it back inside anytime soon. The speed of recruiting just gets faster and faster -- MaxPreps released a Top 50 list for the Class of 2016 today; those kids aren't even freshmen in high school yet, by my math -- and expecting it to slow down is a fool's errand.