It's Not Plagiarism If You Link To It: Vandenberg, Basabe, Woodbury and White

Share All sharing options for: It's Not Plagiarism If You Link To It: Vandenberg, Basabe, Woodbury and White

FIRST, FOR YOU EA SPORTS NCAA FOOTBALL FANS. Here is a pic of QB #16 tweeted by Keith Murphy: 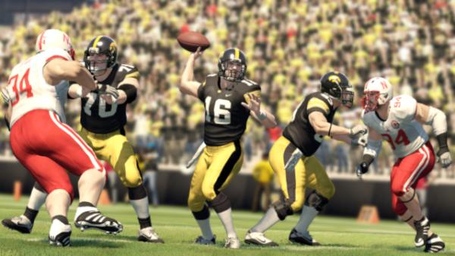 NO MORE VANILLA? Matt Bowen is writing about his former team and says that with Iowa's offense, expect versatility. Bowen doesn't expect many changes from new defensive coordinator Phil Parker but Greg Davis will design an offense around its strengths. Bowen believes Davis will call a lot of short passes to overcome the losses at running back.

YES, THE FRESHMEN ARE COMING. But, Mike Hlas wants us to not write-off junior-to-be Melsahn Basabe. Melsizzle suffered from a sophomore slump last basketball season. Hlas took in opening night in the PTL and said of Basabe, "he looked like a hungry, determined player to me." Hlas had a lot of things to write following opening night of the PTL. If you missed the link in Wednesday's INP comments, here is his take.

HLAS WROTE ABOUT WOODBURY TOO, AND IT'S A CAUTIONARY TALE. Hlas writes,

"those who expect Sioux City's Woodbury to start putting up 18 points, 10 rebounds and impeccable defense from the get-go may need to exercise some patience"

Hlas notes that Jarryd Cole was a tough match-up for the PTL first timer. He adds that there's a long ways to go til the Big Ten season tips and that means a lot of time for improvement.

AND HAWKEYE SPORTS WANTS TO REMIND US THAT SUMMERTIME IS FOR IMPROVING. Aaron White is working hard. He said,

"I have stuff to work on -- my pull up game and more consistent shooting from outside -- and I am always trying to get stronger and work on my post game."

White details his daily schedule in this Hawkeye Sports article. He spends a lot of time in the gym working on his game. He even got locked in there once.

AND WE THOUGHT JARRYD COLE CAME BACK TO HELP THE TEAM. JC popped the question a couple weeks back to women's baller Trisha Nesbitt. The couple will have a year to plan a wedding that will be held in Nesbitt's hometown, Ames, Iowa.

DO WE HAVE AN ACRONYM FOR THE IOWA WOMEN'S BASKETBALL HATING GOD? If not, we need one. Seven players from Lisa Bluder's team are currently rehabbing an injury this summer. Bethany Doolittle isn't one of those seven but she nearly avoided her own disaster. Doolittle was hit by a car while riding her moped.

"If everything keeps playing itself out, our philosophy is going to be sound. We already play two BCS (nonconference) schools each year, and then with our conference schedule - that's pretty solid."

GET CHEDDAR NOT BITTER: Tyler Sash will be signing autographs at Herky's Locker Room on the Coralville StripSaturday from 12-2, presented by Deuce Watches.