A team meeting at the Miami Dolphins mini-camp.

... so the bad news is that HBO has decided to pass on airing "Hard Knocks" this year. They said the Dolphins were too boring.

What! But we got me!

(scowls) And a top-ten draft pick at QB!

But that's the bad news. The good news is that someone else picked up "Hard Knocks."

Right. Good to meet you.

Likewise, likewise... I can't wait to spend some time together.

You know, I was at Iowa for several years before coming to Miami. We had a receiver there... well, let's just say he was quite a "cool" character! Ha ha!

Uh, anyway... So I was thinking we could hang out, get to know each other... you know, start bonding?

Oh no! Hell no! Not a goddamn chance, man.

What? Why not? What's wrong?

I've heard all about you. You think Chad Ochocinco doesn't do his homework? AW HELL NO. Chad does his goddamn homework.

And I know all about the crazy shit you used to pull back at Iowa. Sending quarterbacks out into the woods to fight goddamn bears or some shit... HELL NO. I don't mess with bears. No fuckin' way.

You ain't really trying to deny that you sent them poor dumb quarterbacks out into the woods to fight bears, are you? I've seen the stories, man!

A-HA! You ain't gonna get me out there. No way, no how. Me and bears, we keep our distance.

Chad, I would never send you out into the woods to fight a bear or hunt a bear or anything else.

Seriously. I mean, for Pete's sake, we're in Florida! There aren't any bears around here! Sheesh!

So what, then? Gators? You gonna have me fight gators? 'Cause I don't mess with them either. I talked to Brandon...

Don't be ridiculous, Chad! Alligators are dangerous! Those big long jaws, so full of teeth... /shudder

Well, I already met a bunch of the guys. We've been getting close. Reggie was pretty cool. Ryan said he was gonna look my way every play, but, shit, you know quarterbacks... they're always talking nonsense like that.

/chuckles They sure can be a goofy bunch...

But, no, Chad, not your teammates. I mean dolphins. Real dolphins. They need our help!

They're in danger, Chad!

No, in clear and present danger! They're in peril!

You realize I play wide receiver, right? I'm not, like, a marine biologist or a veterinarian or, um, whatever that Steve Irwin dude was.

It doesn't matter! You don't need any special training or expert knowledge to help them right now! Just follow me!

Yo, Kenny, where the hell are these dolphins at? How do you know they're still in danger anyway? We been out here forever. Also, I'm no zoologist, but I'm pretty sure dolphins don't live in the forest.

(quietly) Oh, they're not the ones in danger...

(loudly) Just a little bit farther, Chad! Just through this clearing in fact...

Chad and Ken step into the clearing 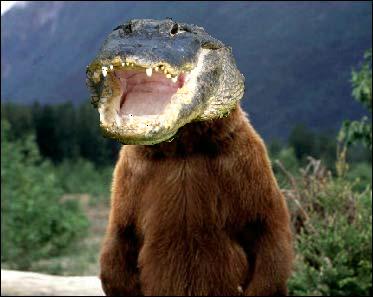 WHAT THE FUCK IS THAT

Aw, you don't want to hurt Beargator's feelings, do you, Chad?

Those fools in their ivory towers! Those self-proclaimed intelligentsia! They said it couldn't be done! "No, O'Keefe, that's absurd! You can't combine a bear and an alligator! That's preposterous!"

PAH! Little men with little brains and even littler ambitions. Well, we showed them wrong, didn't we, Beargator?

They said it violates the laws of nature! PFFT I say they were just too chickenshit to take science to its logical extreme! Beargator is the future, Chad! The future!

I knew I could never realize my dream at Iowa. I tried for several years. Oh, how I tried. But there just weren't enough alligators in Iowa. Who would have guessed, right?

And then Kirk started catching wind of what I was up to and threatened to expose me. Feeble-brained pissant. He was always holding me down, always reining in my genius! So when Joe got the job with the Dolphins, I said "A-ha! There's ol' Kenny's exit strategy! No fuss, no muss!"

Plus, if there's one thing Florida has plenty of it's alligators. Not to mention pretty lax bio-engineering laws.

And retirees. Lots and lots of retirees. Although a few less now, if you catch my drift... /exaggerated wink

You crazy, man. You're a goddamn nutcase.

NO ONE CALLS ME CRAZY! BEARGATOR -- SIC 'IM! 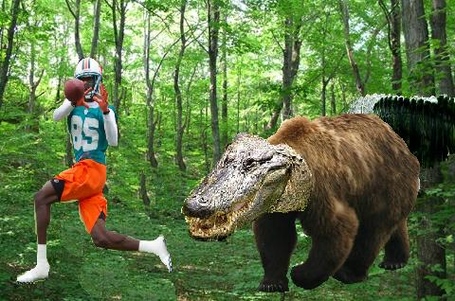 A hissing noise fills the air 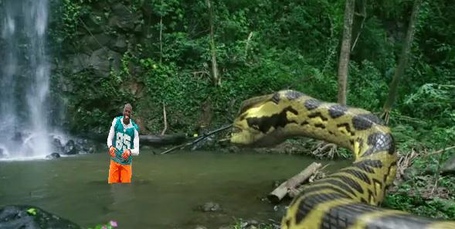 it was just a dream

What was just a dream, Chad?

Oh god. I had this horrible nightmare. You led me out into the woods and told me we needed to rescue dolphins and then there was this crazy monster that you'd made, half-bear and half-alligator, and it tried to eat me so I started running and I kept running and finally I got to this stream and I thought I was safe but when I turned around there was this giant snake-fish thing and it went to eat me and then - BAM - I woke up.

Why are you in my room?

Oh, I just like watching you sleep, Chad! You can learn a lot about a man while he sleeps!

Goddamn, this is gonna be a weird year.