Pro Combat Goes to Ames For Some Reason

Share All sharing options for: Pro Combat Goes to Ames For Some Reason 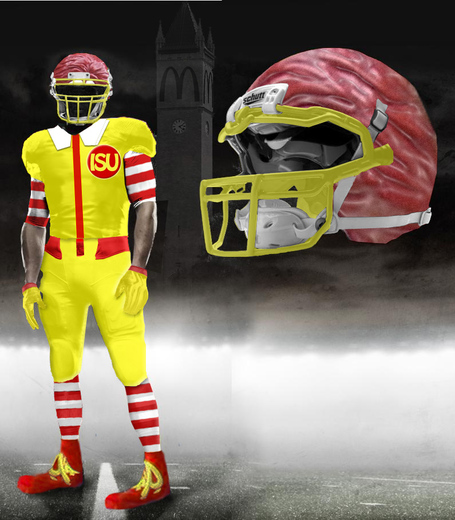 For reasons surpassing understanding, Nike has decided to create Pro Combat uniforms for the Iowa State Cyclones. The new designs, to be worn at the Iowa-Iowa State game this fall, honor the memory of a a great Cyclone team from the early years of football in Ames.

"The 1906 Iowa State team went 9-1, won the Western Independent conference, and defeated Nebraska, Iowa and Drake along the way" said Nike head designer Christopher Polyblend. "And they did it all under the leadership of a very special player: Don McRonald. We decided to honor that great Cyclone team and Mr. McRonald with a striking design that hearkens back to the bold colors and stripes that the Iowa State squad wore at the time."

The uniform features several distinctive 1906 stylistic motifs, including capacious front pockets (used at the time for storage of one's meerschaum pipe and laudanum phial), a starched detachable color, and the so-called "long-boat" shoes that were all the rage in the years before the Great War.

"We also decided to honor Mr. McRonald in particular, by making the helmet of the uniforms match his famous flaming red hair," said Polyblend. 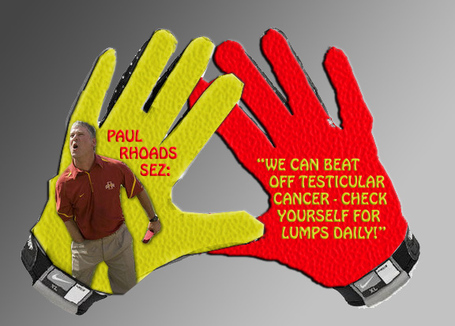 Nike worked off of news accounts of the great quarterback/defensive tackle in making their designs, including the following excerpt from the Ames Intelligencer dated October 7th, 1906:

Standing stoically on the sideline like a gleaming alabaster tower topped by a roof of fiery bronze is the captain, the leader, the brand marker of the squad: Donald McRonald. The senior quarterback had just led the Cyclones to yet another victory, a thrilling 2-0 defeat of the despised Hawk-Eyes from Iowa City, shocking the opposition and supporters in attendance by throwing the ball in a forward manner a collegiate record nine times, earning his team a thrilling seven yards. It marked the culmination of the fiery Scotsman's four-year sojourn in Ames, and for a moment the perpetually beaming McRonald -- known by teammates as "The Harlequin" for his sense of humor and the way he "fools" opposing defenses -- waxed serious.

He then continued, a grimace etched on his chalky white face: "Guid times, the great taste o' victory -- that's wa this is uir place."

McRonald has overcome many obstacles on his way to collegiate football greatness, including his total unfamiliarity with the sport when he arrived via in Ames after a five-week turnip boat-box car-donkey-donkey-donkey-hand cart trip from his native Scotland, his albinism (the cause of his ashen appearance), and his habit of smiling creepily at all times. "Ah couldna even find ma fav'rite vittles haur," said McRonald. "It's a dish ma sainted mither used to make: a grand helping o' haggis topped wi' an egg an' served atween twa pancakes. Thaur's nought lak eet haur."

McRonald has, like 99% of the students in Ames, studied agriculture, but has ambitions to become more than a farmer.

Unfortunately for the death-pale Caledonian ghoul, current U.S. law forbids the operation of restaurants by native Scotsmen, and, in this reporter's opinion, McRonald's foul grease-based meat and potato menu would never succeed in this country.

McRonald's story has a tragic post-script not hinted at in the 1906 article. After going bankrupt trying to make a go of his restaurant, he worked in the circus for many years as "Scotty the Natural Clown", succumbing to cirrhosis of the liver in 1933. 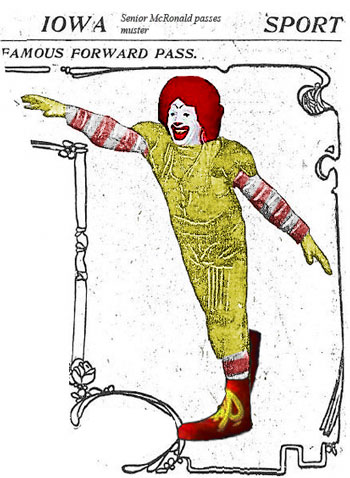 An illustration accompanying the 1906 story about McRonald.

When contacted about the new uniforms, head coach Paul Rhoads became emotional. "I'm just so proud -- SO PROUD -- of Nike, Mr. Polyblend, and this freakish hero of Cyclone lore, Donald McRonald. I never used to like albinos and the like, but in honor of this great man and and tragic end, I promise we will all paint our faces white and wear red fright wigs in his honor his fall." Mr. Rhoads then broke down weeping.

Polyblend believes the uniforms will be a success, and brushes off concerns that the multinational fast food company McDonald's will take legal action to prevent their use. "I really don't see the similarity. Their mascot is Ronald McDonald, but this uniform is based on Donald McRonald, a real figure from history who predates the first McDonald's restaurant by some 34 years. And while there certainly is a similarity between the outfit of Ronald McDonald and my design, I am simply reusing an actual design from Iowa State's football history. If anything, we should be suing them."

The new uniforms will be accompanied by the introduction of several new mascots for the team, all based on designs McRonald made in anticipation of decorating his own restaurant: Mayor McBaby, The Haggis-Pilferer, and Contorted Visage, a large friendly purple triangle who will throw free samples of haggis to children in attendance.