It's Not Plagiarism If You Link To It: DJK Cut By The Alouettes; Jack Dahm Stays Another Year

Share All sharing options for: It's Not Plagiarism If You Link To It: DJK Cut By The Alouettes; Jack Dahm Stays Another Year

FORMER HAWKEYE DERRELL JOHNSON-KOULIANOS IS CUT FROM THE MONTREAL ALOUETTES. DJK has had a hard time finding success in professional football following his Iowa career. He was cut by the Iowa Barnstormers, an Arena League Football team, this Spring. Now, his stint North of the border ends with the Montreal Alouettes of the Canadian Football League. No word from DJK yet on his next move.

ROSSWB ASKED THE QUESTION. Should Iowa Baseball Replace Jack Dahm? Following a 23-27 season (10-14 in Big Ten play) Dahm signed a one-year contract to remain Iowa's head baseball coach. Next year will be Dahm's 10th at Iowa and there's reason for optimism. According to Pat Harty's Hawk Central article, "his incoming recruiting class is widely regarded as the best in the Big Ten." Harty notes a couple of those recruits have decisions to make regarding professional careers. Both pitcher Ryan Borucki and catcher Blake Hickman were selected in the Major League Baseball Draft.

SOMEBODY SAID SOMETHING ABOUT THE COMPANY CEO ALWAYS WINS. In this case it was the CFO that defeated Mark Ironside and Tom Brands in the Aiming For A Cure charity car race. The entire race is on YouTube and you can read the recap here.

HOPE YOU HAD A NICE FATHER'S DAY. Pat Harty wrote a piece on Fran McCaffery the father. We know McCaffery as the fiery basketball coach of the Iowa men's team the past two seasons. He's also a father of four. He's a busy man with all of his responsibilities and Harty documents what it's like to be Fran.

THE GAZETTE TEAMS UP WITH HAWKEYE REPORT TO GIVE A QUICK RUNDOWN OF FOOTBALL RECRUITING. The Hawkeyes now have nine ten commits for the class of 2013. Summer camps at Kinnick are happening now and a few more verbal commits could be on the way. Tom Kakert also talked a little bit about basketball recruiting too.

THAT COULD SOON BE DR. BIGACH TO YOU. Ryan Suchomel, of Hawk Central, profiles Iowa's senior defensive lineman Steve Bigach. In addition to working hard for the upcoming football season, Bigach is studying to take the MCAT (this July). He's already graduated with a degree in integrated physiology (mad props, yo) and will finish this year taking pre-med courses.

HAVE YOU HEARD ENOUGH ABOUT C.J. FIEDOROWICZ YET? There will be more. I mean we still have three months before the season starts. But, seemingly everyone's favorite topic gets profiled yet again by HawkeyeSports.com.

FOR AWHILE THERE WE WERE'NT SURE WE'D SEE HIM AGAIN. But Brad Rogers is back healthy and working out with the team. He missed summer workouts last season while doctors observed his heart and health. Rogers played nine games last season but admits he was out-of-shape when he returned. 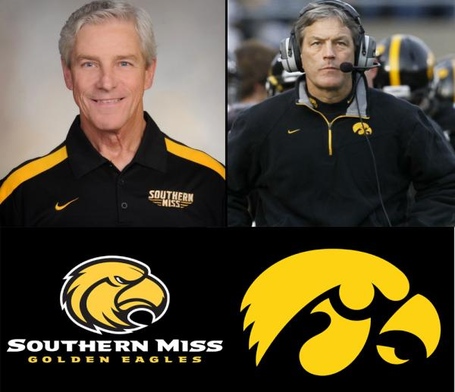