It's Not Plagiarism If You Link To It: Nothing Says Iowa Football Like A Cold Budweiser

Share All sharing options for: It's Not Plagiarism If You Link To It: Nothing Says Iowa Football Like A Cold Budweiser

THE UNIVERSITY OF IOWA LIKES SHITTY BEER. Iowa announced that they signed a four year advertising agreement with beer distributor Anheuser-Busch. So, in and around Kinnick Stadium, where beer is not sold (to the common folk not seated in a luxury suite), there will be ads for AB InBev products. Kind of a strange partnership dontcha think? 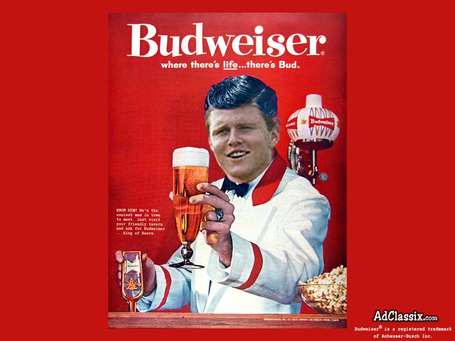 MONDAY'S INP LINKED TO A STORY ABOUT TOM BRANDS AND MARK IRONSIDE RACING FOR CHARITY. Tonight is the race but Brands has already taken a few practice laps. The Gazette's K.J. Pilcher was there to take in the practice laps and get some video of Iowa's head wrestling coach.

AND SUDDENLY, KEVONTE MARTIN-MANLEY IS A LEADER ON OFFENSE. This will only be his second year of playing wide receiver at Iowa. Martin-Manley flashed some skills last year as a freshman. He also disappeared for stretches as freshmen typically do. Martin-Manley said of his role as a leader,

"I'm going into my third year, so I look around the locker room and I'm a veteran. I have to step up and step to the plate and I'm ready to do it. I'm doing it for myself as well as for the rest of the team."

KMM said of the upcoming season, "we're all fighting for positions right now." He's slated to be Iowa's number one weapon from the slot position.

Samantha Logic was the No. 1 pick in the Game Time League draft. #hawkeyes

Suchomel added additional Game Time League information via his Twitter account. A couple of freshmen, Nicole Smith and Claire Till, won't play in the summer league. Also, Morgan Johnson, Theairra Taylor and Melissa Dixon will play part-time in the league.

THE NUMBER OF HAWKEYES CONTINUING THEIR FOOTBALL CAREERS IN CANADA IS GROWING. Drew Tate and Jovon Johnson have had successful football careers in Canada. Former Hawkeye Derrell Johnson-Koulianos and Kenny Iwebema will join them this year. DJK informed the world last fall he was heading North. Iwebema's plans to continue his career was announced yesterday.

BASKETBALL RECRUITING IS HEATING UP WITH SUMMER CAMPS UNDERWAY. Yesterday we talked a little bit about West Des Moines Valley's Peter Jok. A name mentioned in the comments by tyger1147 was E.C. Matthews. Future150 is reporting that Iowa is one of the schools that contacted Matthews this morning. He's 6'4" four-star rated shooting guard (Rivals) from Romulus, Michigan. He's a top 100 player that lists offers from USC, Creighton, Rhode Island and Iowa. (Here are some YouTube highlights.)