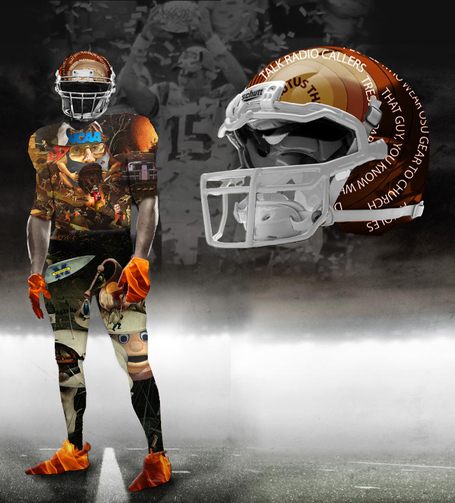 [Earlier editions of the Pro Combat series can be found here:Iowa,Indiana,Michigan,Nebraska,Wisconsin,Minnesota,Illinois,Purdue,Michigan State,Northwestern, Penn State v.1,Penn State v.2]
"It is a truth universally acknowledged that hell is other Buckeye fans," says Christopher Polyblend as he takes a sip from his espresso at a corner table in Le Canard de Nuit, the Nike designer's favorite Eugene eatery. "Overbearing, arrogant, entitled, they are just..." -- Polyblend shakes his head -- "They are just the worst. Everyone knows this." Polyblend pauses and pulls up sketches of his latest uniform design. "Our goal with these uniforms was to show every obnoxious Ohio State fan that not only are they shear torture to hang out with, they themselves are in a kind of hell."
We sat down with Polyblend this past weekend to get a sneak peek at the final entry in his Big 10 Pro Combat uniform series, a design for the Ohio State football team that is sure to cause controversy in Columbus as well as in pulpits around the country. Polyblend believes he has discovered a new variety of sin to add to the traditional categories of mortal and venial: Columbian, after the center of all that is irritating and sick in the college football universe, Columbus, Ohio.
"It's a disputed theological point, true," said Polyblend, "but I think the evidence is overwhelming that Buckeye fans are undergoing a unique form of spiritual degradation, of the sort usually experienced by Yankee fans, Patriots fans, Duke fans.... but worse, because it's in Ohio." 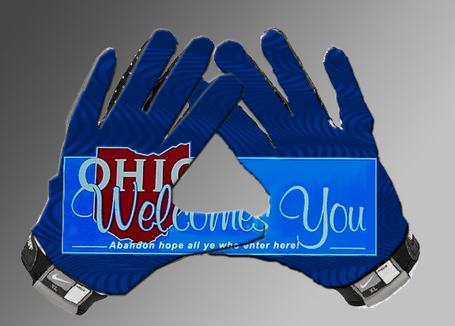 The gloves that accompany the uniform present a new alternate welcome sign for the state of Ohio, to be placed over the entrances to the Ohio Turnpike on the Indiana-Ohio and Pennsylvania-Ohio borders.

The uniform design represents the first attempt to translate the detail and texture of oil painting to Nike's proprietary DRI-FIT fabric. Two of Polyblend's paintings are incorporated into the uniform, The Horseshoe of Earthly Delights and The Last Judgement, or, NCAA Probation.

"The painting is an allegory representing the spiritual death that is being an Ohio State fan. All of the tortures are represented: the NCAA dancing through the corridors of Jim Tressel's mind, Terrelle Pryor being roasted alive in his own gold pants, Tim Tebow and Urban Meyer forcing fans into the Mirror Lake of Fire (a.k.a. the 2007 BCS Championship Game), Satan dotting the "i" in "Ohio", and much more. I tried to paint a comprehensive picture of the odious moral condition of any full-grown man who voluntarily covers himself in scarlet and gray body paint." 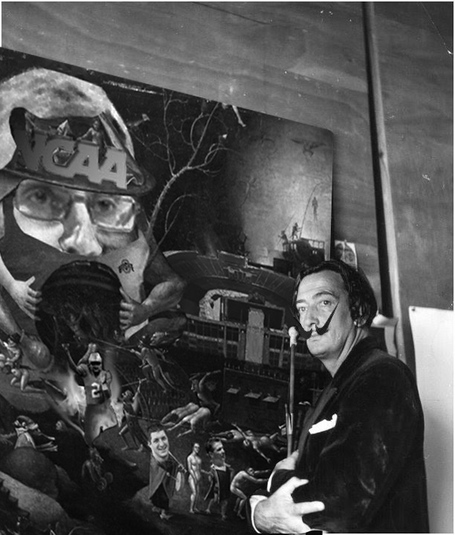 Polyblend in the studio putting the final touches on his masterpiece.

When asked if he thought he was perhaps being too hard on the Ohio State faithful, Polyblend held firm: "There may be a few relatively innocent people in the crowd -- children too young to know better, spouses who are just humoring their husbands, foreign exchange students -- but for the most part these are people who are fully aware of what they are doing. They are freely cheering for the Ohio State Buckeyes."

Polyblend sighed and took a drag on his Gaulois. "I mean, who does that? It's like cheering for the Luftwaffe." 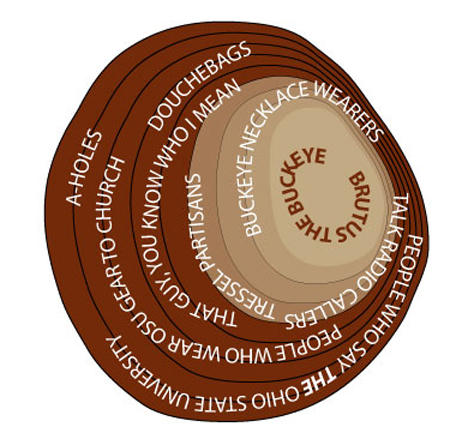 When asked what course of action he would recommend to a fan who does hear the message of the uniform and repents, Polyblend recommended strong action. "Nothing short of complete penitence and sports purgation will suffice. A truly remorseful fan must abandon the Buckeyes for the length of a typical NCAA probation period -- three years -- and during that time follow a team that experiences a more normal life cycle of winning and losing. Luckily the Cavaliers and Browns are nearby."

"I mean, I know this whole treatment seems harsh," concluded Polyblend, "but these people need to learn that the Buckeyes are just a college football team, and that their success confers no distinction or worth on the people who cheer for them. Just cool it a bit, you know?"

INFERNAL TARNATION-WEAR FOR THE SCARLET AND GRAY

[Editor's note: in lieu of a breakdown of the uniform parts, we present this numbered guide to the paintings upon which the uniforms are based] 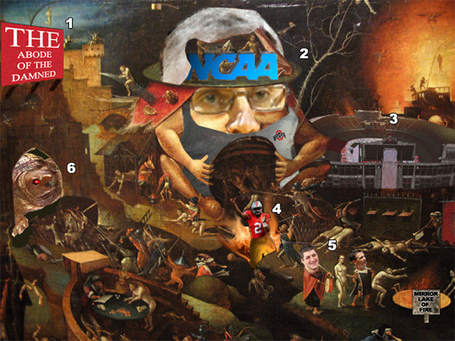 1. Sign welcoming fans to Ohio State hell, also known as Gahanna, Ohio. 2. Jim Tressel is both tormented by the NCAA for all eternity and serves as a bitterly ironic punishment for fans who defended him while they were alive. 3. The Horseshoe is a capacious and fiery home for thousands of damned Ohioans. 4. Terrelle Pryor is roasted alive in his own gold pants. 5. Tim Tebow and Urban Meyer force wretched fans into the Mirror Lake of Fire, aka the 2007 BCS Championship Game. 6. Illinibuck comes alive and provides all the punishment Illinois failed to deliver to Ohio State fans in the temporal plane. 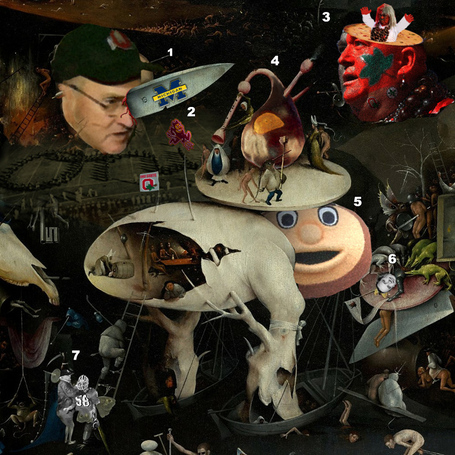 1. Coach John Cooper's head is cleaved by a giant knife representing the Michigan Wolverines. 2. Satan dots the "i" in "Ohio" while skewering band members with his pitchfork. 3. That one obnoxious fan is boiled alive in a vat of Rotel queso made from the skull of that other obnoxious fan. 4. A bagpipe made from a giant buckeye plays "Hail to the Victors", the soundtrack of Ohio State hell, for all eternity, 5. Brutus the Buckeye forms a home for the ravenous hordes of the damned who hollow him out until the end of time. 6. Earle Bruce is torn asunder by crocodiles representing OSU President Ed Jennings. 7. Woody Hayes punches Clemson's Charlie Bauman for all eternity, but experiences the pain of every blow himself.