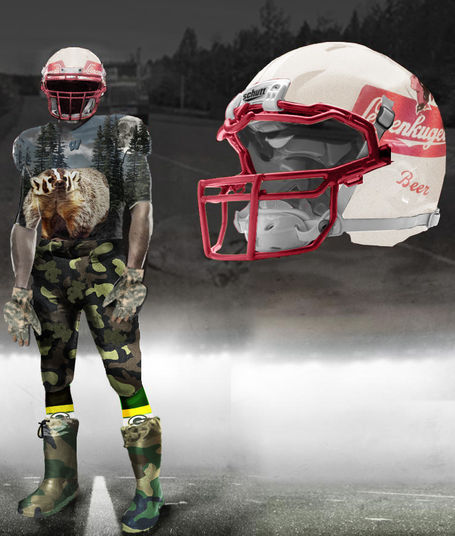 The scene: a neon-lit roadhouse on the outskirts of a small Wisconsin town. It's a warm night in late September and the jukebox is playing Nazareth as the Badgers crush some non-conference foe on the big screen. A man strides in wearing camouflage pants, a Leinenkugel hat and the most glorious screen-printed nature t-shirt known to man, causing the men to choke on their beer in awe and the women to drop their mozzarella sticks out of sheer animal lust. It is this common Wisconsin tableau that Nike attempted to capture in their new Pro Combat design for the team.

"We wanted the uniform to be a celebration of Wisconsin culture, and so naturally we made the centerpiece of the design a totally boss screen-printed t-shirt," said Nike head designer Christopher Polyblend. "Luckily we found a local artist who really managed to incorporate all the key elements that go into a great nature t-shirt: a majestic animal, trees, a few wispy clouds, the moon -- all that shit."

Polyblend elaborated on the importance of the screen-printed nature shirt in Badger culture: "As I understand it, this type of shirt is a very special ceremonial garment for a Wisconsinite. They wear it to hunt and fish, they wear it on their wedding day, and of course they wear it when they are inevitably felled in a hunting, fishing or snowmobiling accident."

The design features several hallmarks of Wisconsin culture: beer (in the form of a custom red-and-white helmet made with the cooperation of the Jacob Leinenkugel Brewing Company), the outdoors (camo pants, duck boots and gloves) and quality screen-printed designs of animals looking noble and serene in the moonlight (see infographic). 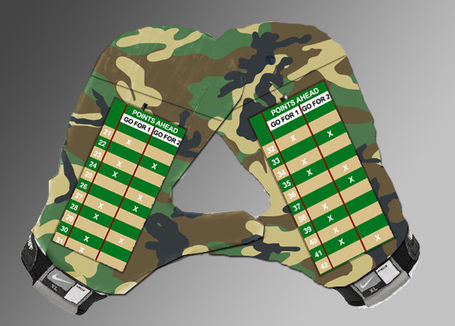 The glove/mittens that accompany the uniform include Bret Bielema's two-point conversion chart.

"It is somewhat mysterious that the Wisconsinites seem to worship the very animals that they ritually slaughter every Saturday morning, but as an anthropologically-minded artist, I make no judgments," added Polyblend. "Of course I've never been to Wisconsin, but I have seen the movie Blood Hook, so I think I know pretty much what it's all about." 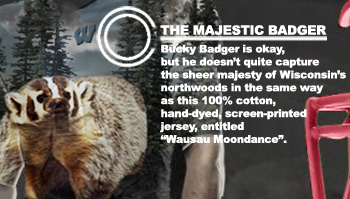 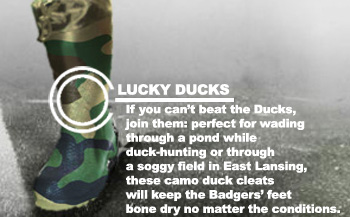