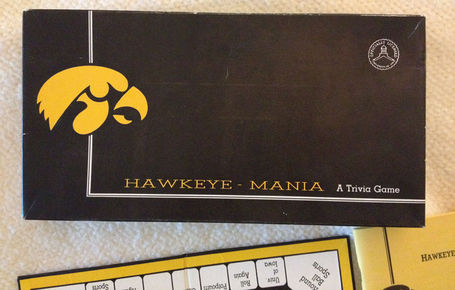 We don't have much call to review board games here at BHGP, but when I came across this copy of "Hawkeye- Mania" at a yard sale, I had to make an exception. Let's dive in, shall we, and play the most popular University of Iowa-themed trivia game of 1984! 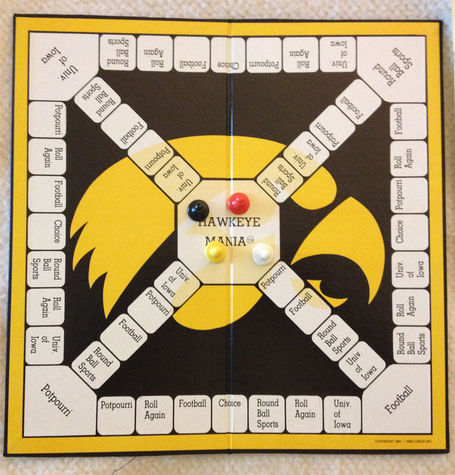 There are five four categories of questions for players to choose from: Football, Round Ball Sports, Potpourri, and University of Iowa. This confirms that even in 1984, Iowa was distinctly a football school, with all other sports relegated to "Round Ball Sports" and "Potpourri".

Here are the instructions:

Pretty similar to Trivial Pursuit, although Time Check, Inc. wouldn't spring for the expensive Trivial Pursuit "pies", thus forcing the players to keep track of which categories they have won in his head like some kind of savage. Also, I will note that my (unopened!) bag of playing pawns included only four pawns, not six as promised. And thus the rousing six-person game of Hawkeye-Mania I had planned died in abeyance.

In two words: insanely obscure. There was a reason my copy of the game was apparently never played by its previous owner. Unless you are some kind of "Rain Man"-style savant whose knowledge of the world was obtained from being locked in a room filled only with UI yearbooks and back issues of The Daily Iowan, it is hard to imagine ever successfully completing this game. Here's a taste of the minutiae:

(This doesn't even include my favorite question: "How many cubic feet are in the refrigerators available at the U of I dormitories?" The answer is, of course, two cubic feet.)

There's a line between obscurity and familiarity that any good trivia game has to tread to remain challenging but still enjoyable, and this game sees that line, crosses it, and then goes looking for the 1983 UI Operations Manual. There are a 1000 questions like the ones sampled above -- a 1000! I fear that this game was only put into my hands as part of some "Twilight Zone"-like plot where I will be forced to spend eternity trapped with questions like the following as my only entertainment : "In a 1954 game, halfback Eddie Vincent ran 96 yards v. which Big Ten Team?" In order to avoid this dire fate, I plan on returning this monkey's paw of a game back to the place whence it came: a yard sale.

PROS: The questions and answers do make for a sort of bizarro almanac of UI sports and general university trivia.

CONS: Questions are too obscure, missing game pawns, no pie pieces, minimal creativity in the board design, blatantly rips off Trivial Pursuit.