It's Not Plagiarism If You Link To It: Get Your Tickets For Iowa's Football Season Opener

Share All sharing options for: It's Not Plagiarism If You Link To It: Get Your Tickets For Iowa's Football Season Opener 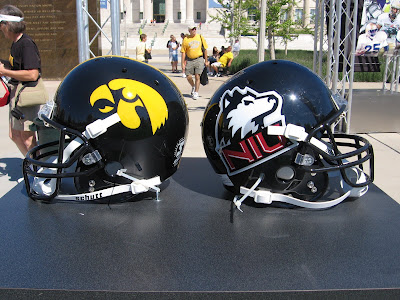 IF YOU'RE NOT A SEASON TICKET HOLDER AND DIDN'T ALREADY ORDER TICKETS FOR THE OPENER YOU CAN NOW. Hawkeye Sports announced yesterday that general public tickets are now available for Iowa's game at Soldier Field against Northern Illinois. Season ticket holders snagged 14,600 tickets and there are a limited number of tickets left.

ANOTHER REASON YOU MAY WANT TO GET TICKETS, TV ISN'T A GUARANTEE. Mike Hlas, of the Cedar Rapids Gazette, writes that there isn't a "traditional telecast set" for Iowa's game against NIU. Last season, Wisconsin traveled to Solider Field to take on Northern Illinois and the game was 'Internet only," aka ESPN3.

NO MORE PRIME TIME LEAGUE FOR U-NI. Citing new NCAA practice hour rules UNI players will no longer participate in the summer hoops league. That means the league will reduce its number of teams to four. The first game of the summer tips off on June 19th.

IT'S EARLY BUT ESPN'S ADAM RITTENBERG ALREADY SELECTS MONTE BALL AS HIS 2012 B1G OPOY. What's interesting is that Rittenberg included James Vandenberg as one that could push Ball for the award. Ball's selection is a no-brainer, he's the returning 2011 Big Ten Offensive Player of the Year.

ROB HOWE TALKED TO BOTH INCOMING FRESHMEN RUNNING BACKS. The time is running out for interviews with incoming freshman football players. Rob Howe, of HawkeyeInsider.com, talked to both Greg Garmon and Barkley Hill. Both are arriving next month in Iowa City. Garmon is skipping the Big 33 All-Star game to focus on winning some reps at running back this fall.

HAWKEYE MEN'S GOLF WILL HEAD SOUTH. The number 26 ranked Hawkeye golf team heads to Athens, Georgia,as a number five seed in the Athens Region. The Hawkeyes will have to finish in the top five to advance to the NCAA Championships.