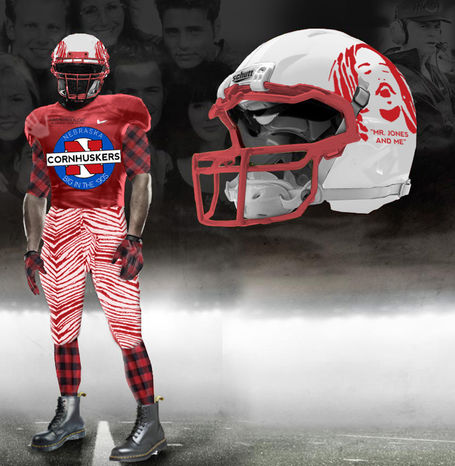 The 1990s: an era universally recognized as the apex of American culture, an era when Nirvana broke down the doors of the music industry, when CompuServe and Prodigy brought the miracle of internet message boards into homes everywhere and when Pepsi was, for a brief, miraculous time, clear. Most importantly, it was an era when Nebraska football reigned supreme. To celebrate the dominance of the Cornhuskers in that illustrious decade, Nike is introducing ProCombat uniforms that recall the days when Nebraska was really good at football.

"Nebraska fans are largely stuck in a state of permanent nostalgia for the days when Tom Osborne roamed the sideline, so I thought it was appropriate to incorporate several classic '90s element in the design," said Nike head designer Christopher Polyblend. "It was a bit tricky from a logistical standpoint -- we had to get permission from several corporations before we could go ahead: Vuarnet, Zubaz, Doc Martens, HyperColor and, of course, Mr. Adam Duritz -- but I think the final effect was worth it."

"We think we really captured an era when Nebraska was great at football, and when America apparently didn't care so much about how it looked."

Nebraska was arguably the most dominant college football team of the decade, winning at least a share of the championship in 1994, 1995 and 1997 and finishing in the top eight in the AP Poll a total of six times. Coach Tom Osborne (and later Frank Solich) led the Huskers to victory on the strength of a powerful I-formation option running game and hard-nosed defenses, all the while musical groups such as Sugar Ray and Smash Mouth achieved widespread fame for some reason. 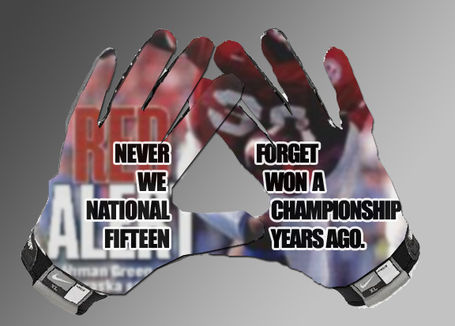 The gloves that accompany the uniform commemorate Nebraska's 1997 national championship.

Polyblend elaborated on the peculiar relationship Nebraska fans have with the past: "There is of course obvious fondness for the days of Tommie Frazier, Eric Crouch and Ahman Green, but the unusual thing is that there is an almost pathological amnesia when it came to the events of the subsequent decade. I thought I would use my design to evoke all the pleasant memories Nebraskans must have for that time, a time when a Lincoln resident could drive down the road in his Taurus SHO, blasting the Goo Goo Dolls, wearing denim overall shorts, feeling good about life."

The designs will break new ground in college, being the first in college football to feature flannel (in the sleeves, gloves and socks) and the ground-breaking thermosensitive HyperColor fabric that changes color when heated (see infographic), as well as featuring the first helmet to honor a moderately popular mid-'90s rock band. "These uniforms will ensure that the Cornhuskers will be able to fit in at nearly any table in a 1993-era junior high cafeteria," said Polyblend.

When asked about the new designs and Nebraska football in the '90s, every Nebraskan we interviewed reacted in the same way: first a slight grin spread across their faces, then a fair-away glint came into their eyes, and finally they commenced to chuckle lightly to themselves as they said "Boy, we put the hurt on the 'Ol' Ball Coach' in the Fiesta Bowl, didn't we?" For safety's sake, our reporters then snapped the fans back to reality by reciting the words "Bill Callahan", causing them to hiss and leap back into the shadows as if physically wounded. 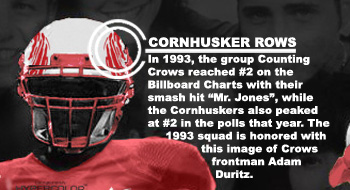 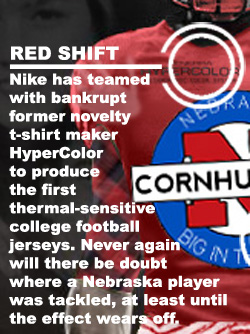 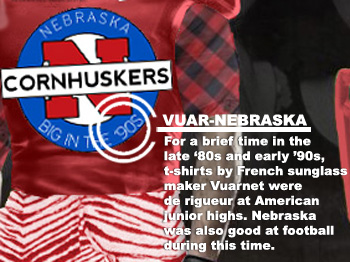 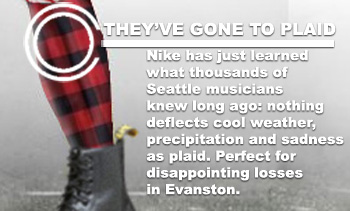 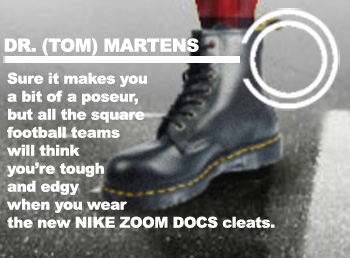 Nike was kind enough to share one of the designs that didn't make the cut. Enjoy!