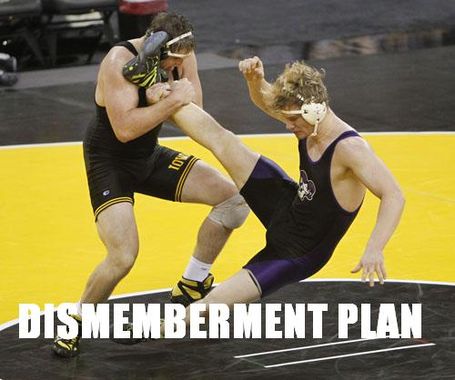 So what can we expect out of Iowa at this weight? Can we even really make a prediction until we know who the regular starter will be? Even then, how can we make a prediction when we don't know whether "Good Blake" or "Bad Blake" will show up if Rasing gets the nod or how Telford will handle big-time competition? Good questions, all. We'll start with the "easiest" question first -- who wins the spot? For now, I'm putting my marker down on Telford. Yes, Rasing is the defending Big Ten Champion and he has considerable experience and wrestled very well at times last year. But Telford seems like the real deal and I think his aggressive approach and attack-happy (for heavyweights, anyway) style will allow him to overcome his lack of experience and earn the nod here. So what can we expect from him if he does take the starting job? Matching Rasing's Big Ten Championship from a year ago will be a tall order for the redshirt freshman, particularly since five of the InterMat Top 20 hail from the Big Ten -- but I think a top-four finish is attainable. As far as NCAAs go, the big question is whether or not he can bull his way onto the podium and earn All-American status -- and I think he can (albeit at one of the lower spots, like 6-8th).

The Verdict: In a way, Bobby Telford's 2011-12 season makes a nice three-act play. In Act I, our hero makes his triumphant debut, winning acclaim and finding success at every turn. Life is good. In Act II, adversity strikes and our hero stumbles and fails. Life sucks. In Act III, our hero rises from the depths to find success anew, having learned a valuable lesson from his previous failure(s). This being real life and not a Shakespearean comedy, this story doesn't end with a wedding and everyone happy (on the bright side, it also doesn't end like a Shakespearean tragedy -- with everyone dead), nor even a grand moment of triumph. Telford finished 2nd at the Big Ten Tournament and 5th at the NCAA Tournament, which is still a disappointment in a sport where the ultimate measure of success is a championship.

But it's also a hell of a lot better than most people (myself included) thought Telford would finish after his season went into an epic tailspin in January. After starting out the season 14-0, Telford fell to Central Michigan's Jarod Trice in the finals of the Midlands Championships via a narrow 3-2 loss in overtime. He proceeded to lose his next three matches and finally his starting job to senior Blake Rasing (who proceeded to go 2-2 while spelling Telford), before regaining it at the end of the regular season. It's possible that Telford's losing streak simply coincided with a very difficult stretch of the schedule -- one of the men he lost to (Northwestern's McMullan) was an All-American, two would have been likely All-Americans if they had competed at the NCAA Tournament (Oklahoma State's Gelogaev and Trice), and one was a top-10 seed (Nebraska's Lane). It's also possible that Telford was dealing with an injury at that time, according to some rumors.

Yet he also didn't look like the same Telford that had won the starting spot at the beginning of the season. The reason Telford won the job and displaced incumbent (and reigning Big Ten champion) Blake Rasing was because Telford wrestled a more aggressive, attack-friendly style. He was good at racking up points. He actually made heavyweight matches exciting to watch. That Telford was AWOL in January. Part of that was the increase in competition, but part of it was just Telford not capitalizing on the opportunities or he head or not aggressively trying to create openings on his own.

That downturn in form for Telford ultimately sent him to the bench (which might not have happened if Iowa didn't have a backup as capable as Rasing sitting behind Telford) and brought an unexpected return to the lineup for Blake Rasing. Rasing went 2-2 in Telford's absence, beating a couple of the Big Ten's lesser heavyweights (Indiana's Adam Chalfant and Ohio State's Peter Capone), while losing to two of the Big Ten's best heavyweights (Penn State's Cameron Wade and Minnesota's Tony Nelson). Nothing too shocking about those results.

Telford returned for the last few dual meets of the season (including the National Duals) and manned the heavyweight spot at the Big Ten and NCAA Tournaments. He went 10-5 after his return, with his only losses coming to the wrestlers who finished in the top three at the NCAA Tournament (Nelson x2, Oregon State's Clayton Jack x2, and Lehigh's Zach Rey). That's not the triumphant ending to our story we might have dreamed of, but it's not too shabby. A fifth-place finish for a redshirt freshman at heavyweight is a mighty fine result. (By way of comparison, Nelson, this year's champion as a sophomore, finished 7th as a redshirt freshman last year.) There are still things Telford needs to work on -- he struggled to escape bigger, stronger wrestlers, he needs to continue to develop his offense from neutral, and (more than anything) he just needs to get stronger -- but his performances at the end of the season give us plenty of reason to hope that we've only seen the tip of the iceberg from Telford in his Iowa career.

Five of eight All-Americans are expected to return next year, including NCAA champion Nelson, and 3rd place finisher Mike McMullan of just Northwestern. But this is another weight where the list of new or returning competitors joining the weight is at least as impressive as the list of returning All-Americans. At the top of the list is Oklahoma State's Alan Gelogaev, who was a buzzsaw through most of last season before suffering a pec injury just weeks before the NCAA Tournament; if he's 100% healthy, he'll be one of the 2-3 favorites to win an NCAA title next year. He's joined by a trio of wrestlers who spent 2011-12 competing for the Olympics -- Missouri's Dom Bradley, Central Michigan's Jarod Trice, and Oregon State's Chad Hanke. Bradley and Trice are former All-Americans and should be very formidable once again. Hanke had an uninspiring career prior to his redshirt season, but he turned the corner last season, looking incredibly dangerous in several events (he handed Gelogaev his only loss last year). If he can ride that momentum into 2012-13, he could be one to watch. And that's to say nothing of three wrestlers seeded in the top-12 at the NCAA Tournament that couldn't crack the podium (Maryland's Spencer Myers, Arizona State's Levi Cooper, and Iowa State's Matt Gibson), but who remain dangerous opponents.

Honestly, Telford will have his hands full just matching his 5th-place finish next year, let alone improving it. He's going to need to prove that his improved performance at the end of this season was no fluke. I don't think it was and I think Telford is going to get better and better (and as I said the other day, I don't expect his recent public intox ticket to have any appreciable impact on his season next year). Which is good because the heavyweight division looks like it's going to be downright nasty next season.

NEXT: The Big Picture -- and how we can beat Penn State.