Share All sharing options for: The 6-1-1 On Why The Big Ten Shouldn't Expand

The SEC (which is not the only conference in college football, no matter how much they like to think they are... although they might be the only one with their own Bat-signal) is getting to set to announce their conference football schedules for the next 12 seasons and part of that process involves revealing the new scheduling methodology to be used now that the league has sprawled to 14 teams. That methodology? 6-1-1. 6 games against your fellow divisional opponents, 1 game against a permanent cross-divisional rival (i.e., Alabama-Tennessee, Georgia-Auburn, Florida-LSU*), and 1 game against a rotating cross-divisional opponent. That last one -- the rotating cross-divisional opponent -- isn't home and away, so Florida could play at Mississippi State one year and then host Ole Miss the next year and so on.

What it amounts to is this: aside from their permanent cross-divisional rival, teams from opposing divisions will be playing each other twice in a 12-year span. Or put it another way: between 2013 and 2025, Florida will make all of one trip to Tuscaloosa to play Alabama. As Brian at mgoblog has noted, that's no longer a conference -- it's two conferences with a scheduling arrangement to work together.

There's no guarantee that a similar set-up would descend upon the Big Ten if more teams were added... but there's not much reason to think that we wouldn't see a similar set-up, either. It is a sensible way to arrange things so long as divisions are in place. Do we really want a future where we play Wisconsin (one of the most even and thrilling rivalries in the Big Ten, if not all of college football) and Illinois (a border rival with a rich history against Iowa) even less than we do now? (Alternatively, it's certainly possible that the addition of new teams from the east -- the most likely destination, given the paucity of options around the midwest and immediate west (sorry, Jamie) -- would result in rejiggered divisions that would send Wisconsin and/or Illinois over to Iowa's division, which would mean more frequent games with the Badgers and Illini, a very desirable outcome from our vantage point.)

There may be reasons to expand -- money, exposure, money, prestige, money -- but short of a radical transformation of college football scheduling (i.e., more conference games, fewer games with money-spinning non-conference patsies) the end result is going to be fewer games against the teams that (for the most part) we've been playing against for a century. Fewer games against the teams that we know, against the teams that we love to hate. The overall advantages of adding Nebraska (probably) outweighed the costs (although I'm still bitter about the damage it's wrought on the Iowa-Wisconsin rivalry), but expanding past 12 teams would effectively be splitting the league in two. We'd be two leagues under one roof, with a rich, intertwined, and shared history... but a future that would share little but revenue statements and logos.

All that said, Scott Dochterman did come up with an intriguing idea for adding Notre Dame to the Big Ten without screwing things up too much. Give it a read.

Although we could also get a little radical and just blow up divisions altogether. Stealing an idea from our blog-buddies at Dawg Sports, the Big Ten could scrap divisions entirely, play three permanent rivalry games, and rotate the remaining five games among the other eight teams in the league. I whipped up a potential table of all the permanent rivals. 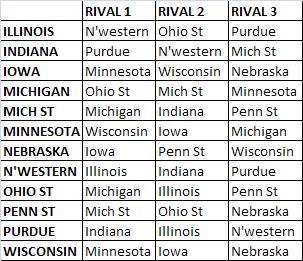 That preserves every trophy game in the Big Ten except for the Battle for the Governor's Victory Bell between Penn State and Minnesota (this is what happens when Minnesota plays for FOUR different rivalry trophies with conference opponents). Among other things, it restores the Iowa-Wisconsin rivalry (huzzah!) and maintains the just-created Penn State-Nebraska rivalry (which is fun and has some good history from when neither team was in the Big Ten). Not all of the permanent rivalries are winners, of course -- I doubt anyone is chomping at the bit for yearly Purdue-Northwestern clashes -- but them's the breaks.

Having five remaining conference games against eight opponents doesn't lead to a clean breakdown, but it would be workable and, most importantly, teams would rarely go longer than a year or two between meetings. That's a plus.

There would be unbalanced schedules -- but that's long been true and it's still true in a world with divisions. (Ask 2011 Georgia, who played in the weak SEC East and skipped out on regular season games against either Alabama or LSU.) And without divisions the potential for ties -- but that was also true in the past and we somehow survived.

Will this ever happen? Probably not. But we can dream...

*As an aside, if you think Iowa got screwed over in the "cross-divisional rivalry" sweepstakes when Jim Delany descended from the mountaintop with his new B1G divisions, spare a little sympathy for Texas A&M and South Carolina, now joined at the hip forever (or until the next conference realignment earthquake hits) by the SEC. Iowa and Purdue had at least played 84 games against one another prior to becoming permanent Most Hated Rivals; neither side may have thought about the other all that much, but there was at least some actual history there. Texas A&M and South Carolina have played one another a grand total of... zero times. Ever. GO SEC AWESOME!