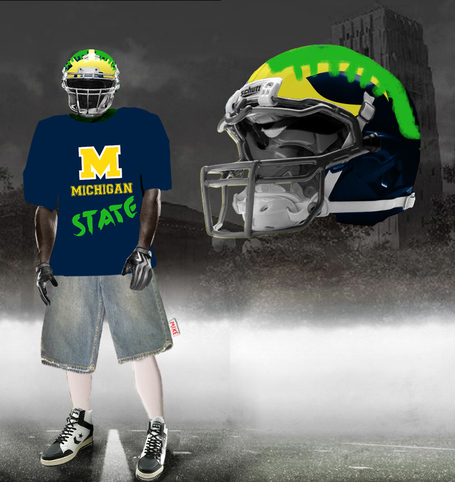 Sparty has always been green, but this year the team will be going the extra mile for the environment by wearing the first uniforms made entirely from recycled products. The new outfits, produced in collaboration with Nike, feature helmets, shirts, pants, socks and shoes that all belonged at one time or another to the University of Michigan.

"In these tough economic times, it is essential that America's public institutions economize," said Nike head designer Christopher Polyblend. "In the case of Michigan State, it was actually mandated by the state. The budget given to me for the original University of Michigan Pro Combat designs was the standard $100,000; for Michigan State, the legislature allocated $64.31. So obviously we had to get creative." 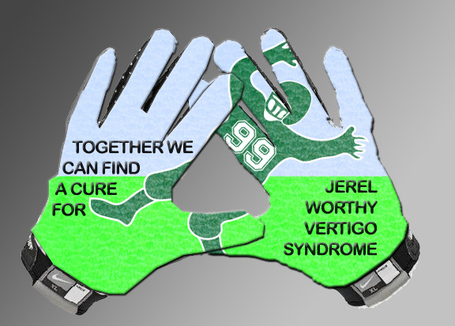 The gloves accompanying the uniforms raise money for the rare and incurable disease, Jerel Worthy Vertigo Syndrome, which struck down several players, including the eponymous Worthy, during last year's MSU-Iowa game.

The uniforms feature surplus t-shirts harvested from the basement of the Michigan student bookstore, used helmets from the football team, and ex-Wolverine running back Mike Hart's jean shorts. Polyblend explained how he managed to stretch his budget to make uniforms that were both economical and stylish. "I spent $45 bribing the guard at the book store to let me into the storeroom, $15 on gas to drive out to Habitat For Humanity for some lime green paint (which they said had gone bad but which seemed fine to me), and $4.31 on gum, a Hot Pocket, and Yoo Hoo. All of the other materials came via donation."

The disparity in funds allocated to the two schools is extreme, but Polyblend explained that the Michigan legislature behaved rationally. "When hard times hit, in any family the parents have to make priorities about what they will spend money on. The first, best and most beloved son obviously will get the lion's share of the family resources, because the parents know deep down that he's going to accomplish the most in the long run. The little brother will, necessarily, get less. He won't be thrown out in the cold, of course, but he will have to make do with the gently used hand-me-downs of his older, more historically accomplished sibling."

A far-away look then came into Polyblend's eye, and he continued in a quavery voice, "Just like Papa and Mama Polyblend sent a certain Nicodemus Polyblend to private school in Switzerland while young Christopher had to make his way to public school through the slums of Thessaloniki every morning. Aρχιμαλάκας!"

Polyblend then regained his composure and described the great generosity of individual donors. "Mike [Hart], obviously, was a crucial donor, giving us his beloved jorts, and Desmond [Howard] really came through with those Converse sneakers. Elvis Grbac even offered us all his game-used jock straps, but they unfortunately were beyond repair and had to be destroyed. Those Michigan guys have the biggest hearts. As soon as they heard my idea, they immediately offered to deliver the gear at their own personal expense. And they wouldn't stop laughing. They are so full of joy, those guys."

When reached for comment about the new jerseys, Michigan State head coach Mark Dantonio gritted his teeth, glared, and calmly took a nitroglycerin tablet from his shirt pocket. He then swallowed the tablet along with the coal-black rage he felt at this latest and most egregious slight, sending both down to the furnace of hate deep in his soul which drives him in his unrelenting quest for college football dominance no matter the cost.

RECYCLED GEAR FOR A LIL BROTHER WHO IS NOT SO LIL 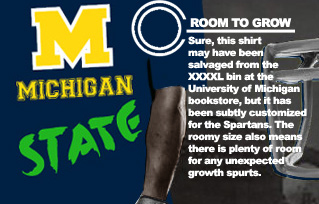 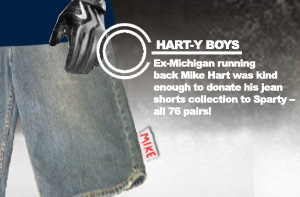 These uniforms were almost used, but were rejected by the Michigan State coaching staff because, as Head Coach Mark Dantonio said, "82% of our team has never seen the inside of a jail cell, therefore these jerseys represent an unfair stereotype." 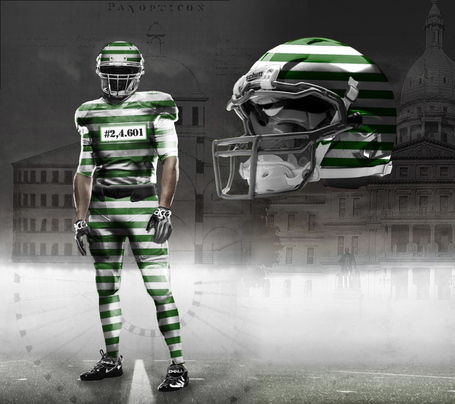 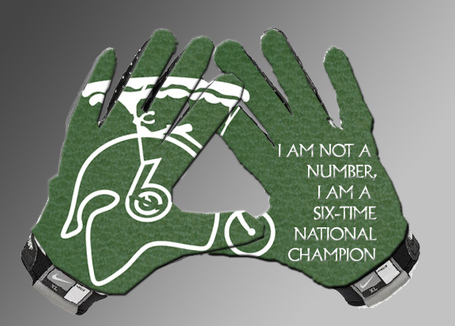