It's Not Plagiarism If You Link To It: The Cy-Hawk Trophy Has Been Chosen

Share All sharing options for: It's Not Plagiarism If You Link To It: The Cy-Hawk Trophy Has Been Chosen 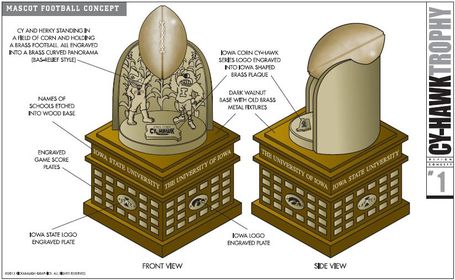 THE FAN VOTES HAVE BEEN COUNTED. We have a new Cy-Hawk trophy. The winner of the annual Iowa-Iowa State football game will have this trophy to parade around with following a win. The voting ended at 11:59 Monday night and this was the winner by a landslide (8,002 of the 10,282 votes).

ESPN'S BRIAN BENNETT SELECTS TWO HAWKEYES AS INDISPENSABLE. Steve Bigach and James Vandenberg were his selections for defense and offense. Vandenberg is an obvious choice but I'm not so sure about Bigach. He's the senior leader but he has only one career sack and one career QB hurry. Christian Kirksey or Micah Hyde would be a better choice.

WE KNOW VANDENBERG IS A SMART KID. He's studied organic chemistry. He may also be the perfect senior quarterback to have at the helm when transitioning to a new offense. Vandenberg is so intent on learning Greg Davis' system he stuck around Iowa City during spring break to study with Iowa's new offensive coordinator. It's going to take dedication from more than just Vandenberg, of Iowa's new system he says,

"I don't think I'm nervous, I think I understand the personnel we have. We have a lot of guys who really want to do well, but they're just young. Mistakes are going to come with those guys. It's something where I might get on them a little bit, but I totally understand what they're going through. Their heads are spinning a little bit."

ONE OF THOSE GUYS THAT CAN HELP VANDENBERG IS KEVONTE MARTIN-MANLEY. KMM has a year of playing experience under his belt. Wide receiver coach Erik Campbell says,

"Now you can see that experience pay off. You can see him looking like a veteran receiver, doing things that a guy with that kind of experience has shown."

Martin-Manley will play a large role this season in Iowa's offense from the slot. Keenan Davis caught 50 passes last season as the compliment to Marvin McNutt. All signs point to Iowa throwing as much as the 400 passes thrown last year.

FRAN MCCAFFERY HAS BEEN BUSY OFFERING SCHOLARSHIPS TO HOOPS PROSPECTS. Iowa has offered E.C. Matthews, a shooting guard from Romulus, Michigan. The Rivals four-star recruit is a 2013 graduate. (Here is a YouTube highlight video.) Iowa also offered 2014 small forward Malek Harris from Orland Park, Illinois. And finally, Tyus Jones, '14 PG, mentioned Iowa while giving his list to ESPN's Jason Jordan. Jones is a loooong shot but hey, he mentioned us!

IOWA'S FOOTBALL RECRUITING HIT A POTHOLE YESTERDAY. Or something like that. Newly named linebacker coach LeVar Woods tweeted this photo with the caption, "nothing messes up a day of recruiting like this! #frustration." They sure don't make spare tires like they used to.

DALLAS CLARK TO THE CHIEFS? There's mutual interest between the two. Clark was in Kansas City to visit Chiefs headquarters and take a physical. If, and that may be a big if, Clark can pass the physical he may join Tony Moeaki on the tight end depth chart.