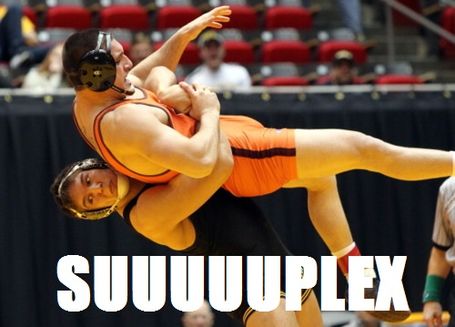 Again, until we see what Lira looks like against some actual 197ers -- and, more importantly, some actual decent 197ers -- it's pretty much impossible to form any sort of rational expectation for his performance this year. He's a complete mystery right now. At the moment, though, I'd be pretty happy with a .500 record in dual meets and simply qualifying for the NCAA Tournament -- anything beyond that would be gravy and even that might be expecting too much. This is not a weight for Iowa where it pays to dream big. For now this looks like the annual hole in the line-up (last year it was 149), so we may just need to be content with whatever success we can scrape together here.

The Verdict: Well, I got at least one thing right -- this was the hole in the lineup (or at least a hole). Unfortunately, the results didn't even meet the admittedly low bar I set before the season. A .500 record in dual meets? Grant Gambrall, Tomas Lira, and Vinnie Wagner combined to go 6-14 in dual meets this season. Qualifying for the NCAA Tournament? Nope -- Wagner went 0-2 at the Big Ten Tournament, ending his hopes and ending a miserable season overall for Iowa's 197ers. In all competition at 197, Gambrall, Lira, and Wagner went 19-21, with most of those wins coming against overmatched opponents at events like the Lindenwood and Grand View Opens.

Of course, neither Gambrall, nor Lira, nor Wagner was plan A for Iowa at 197. That was supposed to be Cayle Byers, a transfer from George Mason who ended up at Oklahoma State and finished 3rd at the NCAA Tournament. Byers was announced as transferring to Iowa last spring, but that fell through for reasons that have never been detailed in public. That was disappointing, but the lack of a plan B was also frustrating. Brands & Co. put all their eggs in the Byers basket and when that fell through, they were left with nothing. Maybe things would have been better if either Wagner or Lira could have had a full season at 197 -- there's no question they were denied time to develop at 197 to make room in the lineup for Gambrall. Wagner had some close calls at 197, even after moving up there late in the season.

But that's all speculation -- what's not speculation is the results and, quite frankly, they weren't very good. Iowa's three-headed monster of Gambrall, Lira, and Wagner recorded exactly one win in B1G dual competition (a 3-1 SV win over Nebraska's James Nakashima by Gambrall), they failed to do much damage at the Midlands Championships, and they failed to do anything at the Big Ten Tournament (which meant they didn't even get a chance to do anything at the NCAA Tournament). It was a season to forget for all of Iowa's competitors at 197. Hopefully next year brings better results.

Well, here's a nice change of pace: a weight where several All-Americans aren't returning in 2012-13. Only three All-Americans from this current season are expected back -- Matt Wilps (Pitt), Alfonso Hernandez (Wyoming), and Micah Burak (Penn). On the other hand, there's a lot of firepower returning that didn't attain All-America status at this year's NCAA Tournament. That includes three wrestlers seeded in the top-8 (Maryland's Christian Boley, Missouri's Brent Haynes, and Illinois' Mario Gonzalez). It also includes a trio of talented freshmen (Penn State's Morgan McIntosh, Ohio State's Andrew Campolattano, and Oregon State's Taylor Meeks) who fell short of All-America status, but who will surely be forces to be reckoned with next year (and in the years to come). (Although McIntosh will probably end up redshirting this year to make room in the lineup for Quentin Wright, recently displaced from 184.) And, oh yeah, it includes the 2011 NCAA Champion, Dustin Kilgore of Kent State, who took an Olympic redshirt in 2011-12. He'll be back and looking to add a second NCAA title to his trophy case. All of a sudden this doesn't look like such an "easy" weight after all... sigh.

There are also some potent freshmen entering the fray next year, most notably Wisconsin's Devin Peterson (#11 overall recruit, per InterMat) and Nebraska's Tim Dudley (#17 overall). Iowa also has an incoming freshman of note, Nathan Burak. Burak isn't ranked by InterMat because he spent this past season at the Olympic Training Center, but he appears to be a very solid prospect. In fact, he may be that rarest of sights: a true freshman starter. Since Brands has been at Iowa, no true freshman has ever been a regular starter for Iowa, but Burak could buck that trend. In part, that's because of the lack of other options (Burak's main competition figures to be Lira, who didn't exactly set the world afire this year). It's also because Burak isn't like most true freshmen; his year at the Olympic Training Center means he has more in common with a redshirt freshman than a true freshman. But even if he starts, what will Burak be able to do in competition? It's impossible to say without seeing him wrestle a few matches, but I'd certainly hope he could improve on the lackluster results Iowa got this past year. Winning a few more matches in dual meets, winning a match or two at the Big Ten Tournament, and winning a match or two at the NCAA Tournament would all constitute real progress.