It's Not Plagiarism If You Link To It: Hawkeye Women To Take On FSU In Big Ten/ACC Challenge

Share All sharing options for: It's Not Plagiarism If You Link To It: Hawkeye Women To Take On FSU In Big Ten/ACC Challenge

LAST WEEK WE FOUND OUT THE MEN ARE PLAYING VIRGINIA TECH. Yesterday, it was the ladies turn to find out their opponent in the annual Big Ten/ACC basketball challenge. The Hawkeye women will travel to Florida to take on the Florida State Seminoles on November 28th. The women, like the Hawkeye men, have struggled in the challenge. Iowa is 1-4 all-time, Florida State is 3-2.

DALLAS CLARK SIGNED WITH THE TAMPA BAY BUCCANEERS. Marc Morehouse thinks DC is one of Ferentz's best player stories. Mo'house dug up his story from 2002/2003 when he wrote about Clark's decision to enter the NFL Draft. Clark was a walk-on at Iowa; a linebacker even. As a walk-on he had to work hard to pay his way, literally.

IOWA-IOWA STATE IS NAMED THE BEST MATCH-UP OF WEEK TWO. According to the Big Ten Network's Tom Dienhart. There's a decent billing that week for Big Ten teams. Illinois takes on Arizona State, Penn State is at Virginia, Purdue takes on Notre Dame and Nebraska and Wisconsin hit the road to take on Pac-12 foes UCLA and Oregon State.

THE BIG TEN BLOG THINKS IT'S TIME FOR BIG TEN TIGHT ENDS TO WEAR COSTUMES AT WEEKEND GATHERINGS. Okay, maybe not that kind of renaissance. The tight end is back baby and the Big Ten has several good ones. At Iowa there is a potentially good one too in C.J. Fiedorowicz. Brian Bennett writes that C.J. could "follow in the footsteps of (Dallas) Clark and Tony (sic) Moeacki."

ONE SIDE NOTE FROM LAST WEEK'S BIG TEN MEETINGS WAS THE ISSUE OF PROTECTED RIVALRIES IN BASKETBALL. Mike Hlas wants to know who we fans think best fits Iowa. You can vote in a poll for either Nebraska (um, no), Illinois, Wisconsin, Minnesota or Other. I voted for the Illini.

PAT HARTY HATES THE CURRENT BIG TEN FOOTBALL DIVISION ALIGNMENT AND SAYS THE TIME IS NOW TO CHANGE. Harty thinks geographical alignment is the bee's knees. He points to Iowa's future football schedule and the absence of Wisconsin as one of his main points. There's also travel time for teams and apparently a bitterness towards Ohio State and Michigan.

OTE CONTINUES IOWA WEEK. Tuesday was "Iowa's Smartest Guys in the Room" post. In other words, who's coaching this thing. I think we already know who they are but it's always fun to read others opinions.

THIS IS COOL, I THINK. From verbal commit John Kenny's Twitter. 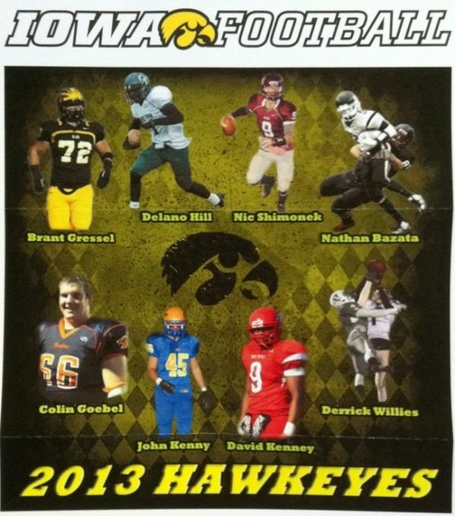