The Big Ten officially released the conference schedules for the 2015 and 2016 seasons yesterday; that information, coupled with what we already knew about upcoming seasons (the '13 and '14 league schedules were announced last year and Iowa's non-conference slate is virtually set through 2016) means we can take a look at the overall picture for those seasons. It's far too early to make any projections (other than 12-0, Pasadena-bound because WOO GO IOWA AWESOME, of course), but hey -- that doesn't mean we can't take a gander at the way things set up for Iowa football over the next few years.

Just like they are this year, Iowa plays only one BCS opponent in non-conference play (Iowa State). In place of a second BCS opponent, we get another delicious MACrifice (although this particular MACrifice, Western Michigan, has not been a very good sacrificial lamb in the past...). It's another schedule designed to get a lot of wins early with three non-BCS foes on the non-conference slate, a date with ISU, and a Big Ten opener against Minnesota. Iowa makes only one trip outside the state of Iowa in its first six games.

This is also the first year under the new scheduling paradigm where Ohio State and Wisconsin rotate back on the schedule, replacing Indiana and Penn State. That should make conference play more difficult, but it also restores one of Iowa's best rivalries: the dead-even Iowa-Wisconsin rivalry (42-42-2). It also brings back Ohio State for only the third time since 2006. Ferentz has had less success against the Buckeyes than any other B1G squad (he's just 1-7 as Iowa's head coach against OSU). It will also be Ferentz's first crack at Urban Meyer as Ohio State head coach. The last time Iowa played a Meyer-coached team, this happened. (sigh)

The season concludes with a Michigan-Nebraska doubleshot; interestingly enough, that's the norm in several of the now-announced schedules. The placement of the Nebraska game is no mystery -- it's been clear since they joined the league in 2011 that they would replace Minnesota as Iowa's traditional* season-ending foe. The inclusion of Michigan as Iowa's penultimate foe is more intriguing, though -- either random chance has led the Delanybot 9000 to spit out that matchup as Iowa's second-to-last opponent in three of four years or the Delanybot 9000 wants that game there because it suspects the game might have implications for the division title race. Just a thought.

* Yes, Iowa has played multiple teams in season finales -- but until last year they had played Minnesota in that spot almost exclusively since 1980.

Like 2013, the 2014 season includes a pair of bye weeks. This is a bit of a new phenomenon for Big Ten teams, created by two circumstances: 1) the early arrival of Labor Day in 2013 and 2014 and 2) the Big Ten's fairly recent decision to play games after Thanksgiving. The bye weeks in 2013 seem fairly well-spaced (one comes after six games have been played and the second comes after ten games have been played), but Iowa's bye weeks in 2014 look downright bizarre -- the first comes just five weeks into the season and the second comes only two weeks later. Iowa's going to basically take half of October off in 2014, which will present an unusual challenge in terms of preparation and conditioning. (On the other hand, it's almost like getting a training camp in the middle of the season, which could prove useful.) It also means Iowa will go over a month between home games (9/13 to 10/18) -- hopefully fans in Iowa City don't forget about football in the interim (ha).

As they do in 2013 (and as they have for what seems like the last decade), Iowa opens conference play on the road in 2014 with their first game in Madison since 2009 sandwiched in-between those bye weeks. It's a potentially grueling final month of the season, too, with three road games and five potentially difficult divisional games in that span.

Note that here (as in every year on this schedule) the Nebraska game is listed for a Saturday. Last year, when the decision to move the 2011 and 2012 Iowa-Nebraska games to the Friday after Thanksgiving was made, it was emphasized that it was being done on a trial period. Obviously, that was for Iowa's benefit, not Nebraska's -- Nebraska has been playing in Black Friday games for decades, so it's nothing new for them. The decision on whether future Iowa-Nebraska games are played on Black Friday will be made after Iowa hosts a game on Friday this year. If Iowa doesn't have any problems hosting the game on a Friday, I'd expect a press release shortly thereafter that confirms that future games in the series will also be played on Fridays. The only problem I can envision is if there are issues with UIHC because it's a Friday, but I also have no idea how busy UIHC is on the day after Thanksgiving. Anyone know?

2015 is another schedule where Iowa spends the first half of the season in the friendly confines of the Hawkeye State -- their first trip across state lines is an Oct. 17th date with Our Most Hated Rivals in West Lafayette. That also means that -- rarity of rarities! -- Iowa opens conference play with a home game. In fact, they get back-to-back home games to start B1G play (Northwestern and Michigan State). Looking at the schedule, on paper Iowa has no excuse for not getting off to a good start in 2015.

And what's that I spy on Halloween? A home date with... "Illinois"? Who's that? Very mysterious. We'll need to do further research on this "Illinois" and their alleged football program.

Also returning in 2015? Our good friends at Penn State after a two-year hiatus. (That's the good news; the bad news is that their inclusion means the exclusion of Wisconsin and Ohio State once again.) Meanwhile, in the Odd Coincidence Department (or is it?), Iowa gets a bye week before ending their season with games against Michigan and Nebraska, just as they will in 2013 (and 2016). The Delanybot 9000 is giving Iowa every means of getting properly prepared for those season-ending clashes.

Iowa's September 24th game is TBA because Iowa hasn't yet announced an opponent for that date; with any luck, Iowa will begin a home-and-home series with a Pac-12 opponent on that date (given that Iowa's other three non-conference games are at Kinnick, there's a good chance the 2016 game would be at a Pac-12 stadium in order to keep the schedules properly balanced).

The 2016 schedule is also a perfect mirror of the 2015 schedule, aside from the obvious home-away swaps and the Northwestern and Minnesota games switching spots on the schedule. Like 2014, 2016 appears to have a difficult closing stretch -- three of the last five games are on the road and all five could be challenging. That is, of course, pure paper talk and speculation given how little we know about the composition of those teams at this point (of players we even know a little bit about, only members of the 2012 recruiting class who redshirt and members of the still-forming 2013 class will still be around at that point). That said, I feel confident in stating that Nic Shimonek will utterly pwn Penn State and that Greg Garmon will assuredly rush for 200+ yards as a redshirt senior against Northwestern. (Iowa running backs always last 'til their redshirt senior season, right? I'm 98% sure they do.)

Notably absent from all four of these schedules? The Indiana Hoosiers. Yes, after the 2012 campaign, Iowa's celebrated rivalry with the Hoosiers will go dormant for at least the next four seasons. What a travesty. (Then again, given Iowa's losses to them in 2006 and 2007 and their struggles in wins over Indiana in 2005, 2009, and 2010, maybe it's not such a bad thing if the Hoosiers won't darken our doorstep for the next Presidential term.)

Here's a handy table including all four schedules. 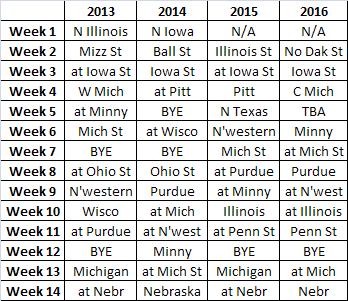