Share All sharing options for: Iowa is still massively popular across Asia

It appears as though Iowa's influence on Asian culture is rapidly spreading. The Hawkeye presence in South Korea has already been well-documented. It all started with the 9-headed sexbeast that is Girl's Generation and their video for OH! If you haven't seen it, it's basically 3 1/2 minutes of spank-bank gold with a gaggle of hot Asian post-teens kissing and squeezing a Hawkeye helmet. 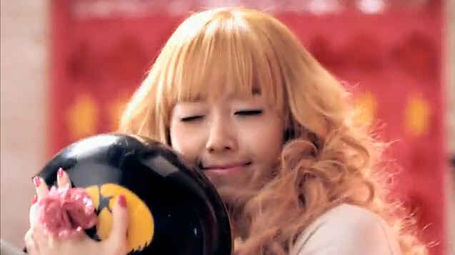 Shortly thereafter, there was the Silver Fins video for a real piece of shit song called "Zooing." It's basically some dude who grew some nifty facial hair, learned to play a "G" and "E" chord repeatedly, wrote 7 total lyrics, went to the zoo with his girlfriend and recorded a video on a five dollar 0.5-megapixel camera. Having said that, he's wearing a Hawkeye t-shirt so it pretty much rules. Here's a picture of him singing to a Korean donkey, which accurately sums up the entire video. 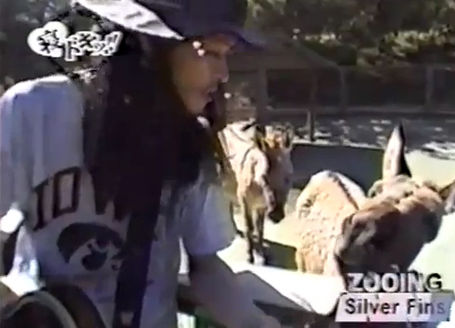 Then we had this guy flying a jet over South Korea with the same Iowa hat my grandpa wore from 1980 to 1992 and a gnarly Stanzified fighter pilot helmet.

With all of that big Korean loving, the adwizards at blackheartgoldshirts released this masterpiece of modern shirtware.

And while that is definitely a picture of Japan on the t-shirt, it turns out to be a nice segue.

A co-worker of mine recently took his second trip to Japan. Now this guy sits 5 feet away from me and so he has to hear all of my "Hawkeye bullshit" all year long. It should be noted that I live in Colorado, so that's like some asshole at your job in Iowa telling you all about New Mexico State football when you clearly don't give a shit.

Anyway, about halfway through his trip I got a text with the photo below and this subject line:

"Tokyo Metro. You've got to be fucking kidding me." 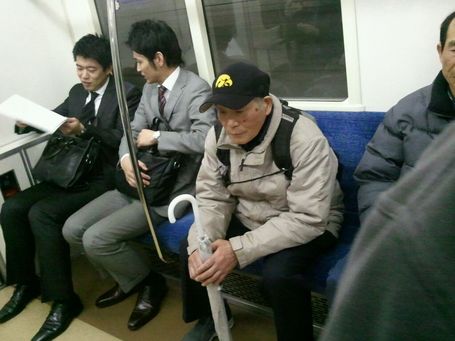 An elderly Japanese man ponders life, existentialism, and what 2009 would have been like if Shonn Greene had stayed.

Since we'll never know the back story associated with this guy, we're going to just have to make one up.

I'd like to think he used to own a little store in a back alley in Osaka and one day an American came in and was browsing through the antiques and trinkets looking for the perfect souvenir to take home to his son and he came across a little furry singing creature and he tried to buy it, but the shop owner told him "mogwai not for sale," but then the guy offered him his Hawkeye hat and told him it had special powers and so the shop owner agreed and now he's been wearing the hat for like 20 years waiting for the special powers to appear and he's starting to think he got fucked over on the mogwai deal, but he's going to keep wearing it because the only other hat he has is a replica C3PO helmet.

What do you think?