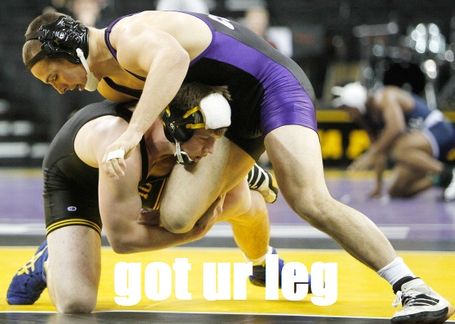 Needless to say, this makes predictions for Gambrall rather maddening. Frankly, his own Jekyll and Hyde performances last year would have made things difficult enough -- never mind the staggering depth and quality of this weight nationally. But I still have to put my marker down somewhere, so I'll go with a 3rd place finish in the Big Ten (finishing behind Wright and Steinhaus) and a lower All-America finish (5-8th place) at the NCAA Tournament. Mind you, better finishes than that would hardly shock me -- he beat many of the other guys in the top 5-10 last year and his NCAA Tournament run was certainly impressive. At the moment, though, it's not yet clear if that was just the result of Gambrall putting everything together for one hot run over a weekend or if he truly has elevated his game to another level and it was a precursor to the sort of dominant wrestling we'll see out of him this year. I lean toward the former at the moment -- but I'd be happy to be proven wrong.

The Verdict: Did I say Ethen Lofthouse was the new frontrunner for the "most frustrating wrestler on the Iowa team" award with Montell Marion's departure? I may have been premature in handing that honor to Lofthouse; based on the last two years, Grant Gambrall could easily give him a run for his money. I'm loathe to criticize him for last season too harshly; he suffered a concussion in the off-season that clearly impacted his preparation for the season and put him well behind schedule (and above his usual 184-lb. weight class). There have been varying reports about the role the concussion played in Gambrall's struggles (some say a lot, some say a little) and I have no way of knowing which reports (if any) are true. Nor do I have any desire to criticize a young man dealing with concussions; if the last few years have taught us anything, it's that concussions are 1) grossly under-reported in athletics, 2) a very serious problem, with long-term implications that we're just beginning to understand.

But -- and there's always a but, right? -- Gambrall is still an awfully maddening wrestler to watch. The way he wrestled at 184 this year (at the end of the season) wasn't markedly different from how he wrestled at 184 for much of last year: tentative offense and struggles against opponents who are bigger and stronger. A year ago, our hope was that Gambrall's stunning 3rd place performance at the NCAA Tournament was a harbinger of things to come, that he had finally harnessed his abilities and was ready to assume his place as one of the top 184ers in the country. Based on the end of the season, that NCAA Tournament showing looks random rather than prophetic.

While Gambrall tends to struggle against bigger and stronger opponents, like Lofthouse his biggest issue appears to be mental rather than physical. At one point or another, Gambrall has beaten virtually every top 184er, so it's clear that he has talent. Unfortunately, he's unable to display that talent on a consistent basis. He has some solid offense when he actually cuts loose -- the problem is that he so rarely uses it. Waiting until the final thirty seconds of the match to go on offense is not usually a winning formula. The trick for next year is getting Gambrall into a mindset where he feels comfortable going to his offense early and often and being a more aggressive wrestler.

And few words about Gambrall's replacement at 184 for much of the year, Vinnie Wagner -- thanks for everything. I'm sorry there weren't that many wins (only nine) and I'm sorry there wasn't a happier ending to your story (crashing out at the Big Ten Tournament at 197 lbs.), but I am grateful for everything you gave your coaches, teammates, and fans during the regular season. If effort alone could win matches, Wagner would be an NCAA Champion; he kept going and going and going in match after match. Unfortunately, effort alone doesn't win matches -- talent matters too, and Vinnie just wasn't as talented as most of his opponents. But it was still fun to watch Wagner scrap and claw in every match.

This was a vicious weight class in 2011-12 and it doesn't figure to get much easier in 2012-13 -- only two All-Americans aren't returning, Appy State's Austin Trotman (one of the feel-good stories of the NCAA Tournament) and Wyoming's Joe LeBlanc (one of the biggest busts of the NCAA Tournament). Penn State's Quentin Wright is also not expected to return at 184 -- it sounds like a done deal that he'll move up to 197 to make room for Ed Ruth at 184 lbs. But I don't think that will damage the competitiveness of the 184 lb. division at all. Bosak, Hamlin, and Bennett should ensure that this remains a beast of a weight outside the Big Ten (and don't forget UNI's Ryan Loder, who had a disappointing NCAA Tournament but was still ranked in the top-5 for much of the season), while Ruth, Steinhaus, and Ihnen should rule the roost in the Big Ten. There's also the matter of Travis Rutt, formerly of Wisconsin and currently of... who knows. He spent 2011-12 on an Olympic redshirt but he's headed back to college next year and whoever gets him will be getting a top-10 184er.

There are also some big-time recruits entering the fray next year: the most high-profile is Oklahoma State's Jordan Rogers (missing from my table because I am dumb), who's InterMat's #4 overall recruit. Illinois is adding Nikko Reyes (#24) and Lehigh is adding Brandon Griffin (#23). Iowa's also boosting their hopes at this weight with the addition of Sam Brooks out of Illinois (#18). I wouldn't expect a true freshman to push a redshirt senior out of the lineup, but hopefully Brooks' presence will push Gambrall to be better -- and get Brooks ready to take the weight by storm in 2013-14 (when only one of this year's All-Americans will be expected to return, Minnesota's Steinhaus). But what Iowa gets out of this weight is going to depend entirely on which Gambrall shows up. If the Gambrall who took the NCAA Tournament by storm in 2011 shows up, Iowa has an excellent shot at a high-placing All-American at this weight. But if the Gambrall who slogged to disappointing finishes at the Big Ten and NCAA Tournaments this year turns up instead, Iowa won't get any more out of this weight in 2012-13 than they did in 2011-12.