It's Not Plagiarism If You Link To It: More From Big Ten ADs In Chicago

Share All sharing options for: It's Not Plagiarism If You Link To It: More From Big Ten ADs In Chicago

FIRST, THIS. BECAUSE IT'S FRIDAY? 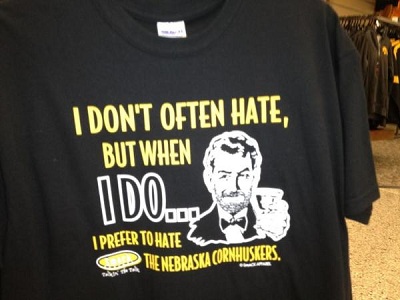 THE BIG TEN BOWL TIE-INS ARE CHANGING. And one possible new option for the Big Ten is New York City. The Big Ten wants to move from Florida where there are too many bowl game tie-ins and New York might be a good fit. The Pinstripe Bowl is played in Yankee Stadium. The Bowl's first game was played in 2010.

THE BIG TEN ALSO WANTS TO CHANGE BOWL TICKET DISTRIBUTION. Schools are eating a lot of tickets nowadays. Fans can find cheaper options online and in better seats. Scott Dochterman writes that in 2011,

Outside of Wisconsin and the Rose Bowl, the other seven Big Ten schools committed 96,001 tickets to bowl games. Only 41,739 tickets were sold. Of the seven bowls, only one - Michigan in the Sugar Bowl - did the Big Ten school's sold ticket total sold reach more than 10 percent of the overall game attendance.

THE BIG TEN AND PAC TWELVE DEAL IS MOVING FORWARD. Some schools begin play before but all from both leagues probably will not begin play until 2017. Because of the deal expect the Big Ten to move to an eight game league schedule instead of nine. According to Adam Rittenberg,

"The details are still being worked out, which isn't a surprise when you have 24 major-conference programs with unique interests, scheduling philosophies and scheduling agreements. But Delany hopes to have a more specific idea of the scheduling models in the next few months."

THIS TIME, EXPANSION WAS NOT A HOT TOPIC. There's those rumors out there that Florida State and Clemson are heading to the Big 12. Jim Delany said, "Our (Big Ten) position hasn't changed. We're very pleased with the 12 institutions we have. We're not in an active mode." He did admit that around the nation "The tectonic plates underneath conference alignment are still hot," just not in the Big Ten.

NOT A BIG TEN ATHLETIC DIRECTOR BUT THIS WAS SAID.

ISU AD Jamie Pollard says B1G teams are pushing 7 win bowl eligibility so they can "water down" schedules after agreement with Pac12 starts.

KEENAN DAVIS THE BEST WIDE RECEIVER IN THE BIG TEN? He is according to the Big Ten Network's Tom Dienhart. Tom notes that Davis is the wide receiver returning with the highest average receptions per game. Also, he thinks the combo of Davis and Kevonte Martin-Manley could be the Big Ten's best.