It's Not Plagiarism If You Link To It: Jaleel Johnson Says He's Good To Go

Share All sharing options for: It's Not Plagiarism If You Link To It: Jaleel Johnson Says He's Good To Go 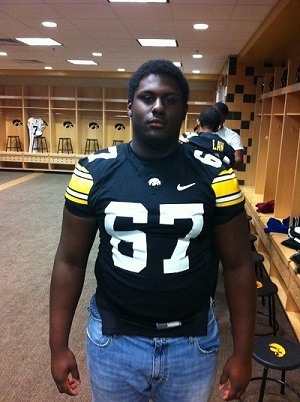 ROB HOWE HAS AN INTERVIEW WITH JALEEL JOHNSON ON HAWKEYE INSIDER. It's a free article on his subscription based website. Johnson says he's scored high enough on the ACT and has improved the grades necessary to qualify at Iowa next fall. His qualifying had been a concern since signing day.

Johnson says he's ready to contribute right away and "what Coach Ferentz has told me is that playing time for me is realistic." One note from Howe that may play into early playing time, "Johnson is debating on whether to arrive at Iowa for voluntary summer workouts in early June or wait until July."

MARVIN MCNUTT IS THE DAILY IOWAN'S MALE ATHLETE OF THE YEAR. The DI continues to hand out end of the year awards and the Male Athlete of the Year Award goes to Marvin McNutt. The Hawkeye senior footballer set nearly every wide receiving record at Iowa in 2011. He recently signed a four year contract with the Philadelphia Eagles.

THE AWARD FOR FEMALE ATHLETE OF THE YEAR GOES TO: BECKY STOUGHTON. Like McNutt, Stoughton received the honor from the Daily Iowan. Becky is a freshman swimmer that has already set several Iowa records. According to the DI, Stoughton,

WE REALLY ARE MAD AGAIN. The Des Moines Register's Rick Brown grabbed some quick stories and quotes from fans at the Jasper County I-Club meeting. Club president Dan Ellis told Brown, "I think he's doing a great job." McCaffery has noticed fan enthusiasm on the I-Club circuit too. McCaffery says that support was there early but, "they're more excited now."

MORE ON MCCAFFERY'S CONTRACT TALKS. "It's important, but it's not urgent," says Iowa Athletic Director Gary Barta. Both Barta and McCaffery have met over the off season and more money and more years could be added to McCaffery's current six-year deal.

JARROD UTHOFF IS STILL CONSIDERING IOWA. He's visited Iowa State and Creighton. There's also plans to visit Marquette and Florida. Uthoff can't receive communication from Big Ten coaches unless he enrolls at their school. He'd have to pay his own way for one year if he were to enroll at Iowa or any other Big Ten school. Uthoff may participate in the North Liberty Prime Time league, that is if his new school, Iowa or otherwise, allows it.

HEY, MEN'S TRACK AND FIELD! They don't get the pub around here other sports do (and that's my fault) but today the Iowa Men's track and field team will try to become back-to-back Big Ten Champions. Iowa's biggest competition appears to be Indiana, Wisconsin and Nebraska.

ONE OF THE GREATEST HAWKEYES OF THE HAYDEN FRY ERA GOES INTO ANOTHER HOF. Andre Tippett was a sack machine for Hayden Fry's early 1980's Hawkeyes. He's been elected into Pro Football's Hall of Fame and now he'll be inducted into the Alabama High Sports Hall of Fame. Tippett is a native of Birmingham, Alabama.