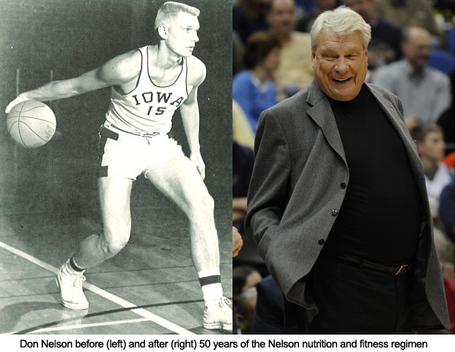 As you may have heard, Don Nelson will walk across the stage at Carver-Hawkeye arena this weekend and receive his undergraduate degree in physical education, 50 years after leaving the University of Iowa to pursue a professional career in basketball. What you haven't heard, though, is the story of how the 71 year-old Nelson completed the necessary credits for his bachelor's degree. It's a story 50 years in the making, a story of breathtaking scientific achievement, self-sacrifice, and bold self-experimentation; it's the story of Nelson's development of his own, revolutionary regimen for overall health and well-being, the Sports & Coaching Osteopathic Training Course for Health.

The grain of an idea

The scene was Iowa City, 1962. A young Don Nelson was wrapping up the second of two All-American seasons as a forward on the Iowa basketball team when a friend dragged him into the Airliner Bar and introduced him to a health supplement that would revolutionize the world of health and fitness: Scotch whisky.

"The first Scotch that friend introduced me to was, I believe, Dewars," said Nelson in a recent interview. "In retrospect, not a very good whisky, but at the time it was revolutionary for me. I don't remember much about the rest of that night, but the first electric taste of that fiery nectar of the gods triggered something in my brain. And that's why I'm standing here before you 50 years later, about to become a college graduate."

Nelson described how he took his first musings about the salutary effects of the miracle drink to his physical education professor, Dr. Asa Griffey: "Prof Griffey was not impressed, to say the least. He read me a litany of the supposed adverse health effects of alcohol consumption, and even reported me to Sharm [Scheuerman]. I had to run quite a few stairs because of that incident, but it also gave me the first proof that I was onto something special."

Nelson explained that while running stairs the day after the first run-in with Professor Griffey, he noticed a marked difference in his performance. "I had a blinding hangover, I was dehydrated and nauseous and my head felt like it was being cut open with acetylene torches, but I had my best time ever on those stairs and didn't feel at all winded when I finished." It was at that point that Nelson decided that he needed to pursue his discovery further, outside the official academic channels if necessary. 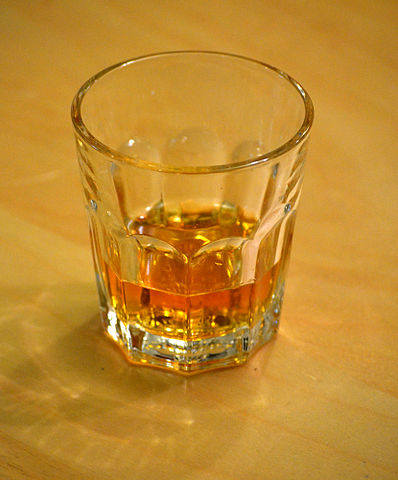 "The stuffy world of 1960s-era physical education departments was not ready for the discovery that the single malt Scotch could be the key to athletic achievement," said Nelson. "So I designed an experimental regimen using the methods I had learned in Professor Griffey's classes and made myself the first test subject in what would be the longest single subject clinical trial in medical history. It wouldn't pass muster at an IRB [Institutional Review board] today, but sometimes you have to go outside the boundaries of regular science to make truly groundbreaking discoveries."

Nelson would tinker with the regimen over the years, but the basic template has remained the same since that revolutionary day in 1962. "Rule one of my regimen is simple: have one glass of single malt Scotch every night. Preferably from Scotland, preferably aged at least eight years, and preferably out of a crystal tumbler in front of a roaring fire, but the fundamental requirement is 2 fl. oz. of Scotch every night after dinner."

Nelson believes the success of his professional career is the best evidence available that his method works. "Five championships as a player, 1335 wins as a coach, a 40-plus years in the NBA in some form -- I'd say my system worked pretty well. I coached everyone from Marques Johnson to Monta Ellis, and the smooth, soothing taste of Glenlivet kept me focused and energetic every step along the way."

The long time coach has also experimented with more broad-ranging diet plans: "There's the S.S.E. protocol -- Scotch and Scotch eggs -- that I followed for a time in the '90s, there's the S.S.E.C.C.H. protocol -- Scotch, Scotch Eggs and Cuban cigars while living in Hawaii -- that I follow today, and of course the S.F.G.P.S. protocol that I used in the '70s. That was Scotch, fondue, groupies and plaid shirts." 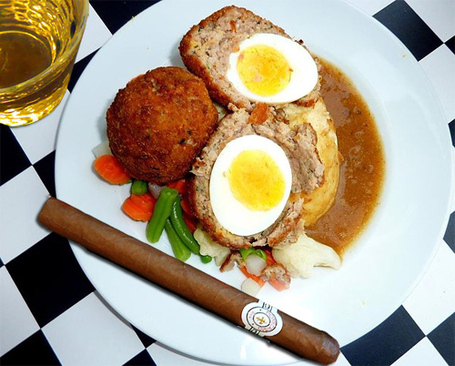 An alternate formulation of the Nelson protocol

The sting of rejection

Nelson prepared his findings in a senior thesis entitled "The Health Effects of a 50-year Single Malt Whisky Diet" and submitted it to the University of Iowa department of Exercise Science in the fall of 2011. "They rejected it out of hand. I've never seen so much red ink on an academic paper, actually. Or cursing. They said I shouldn't be alive. Wanted to study me in their lab." Nelson was disappointed, but this first taste of scholarly rejection led directly to his greatest academic triumph.

"After that I found out that I didn't need to write a senior thesis at all to graduate, just a language elective. So I took a correspondence course in Spanish, told the department of Exercise Science 'Anda que te coja un burro' and here I am today, a college graduate." Nelson then let out a hearty laugh, held his tumbler up to the light, and took a long draft of 25 year-old Glendronach before releasing a richly satisfied sigh.