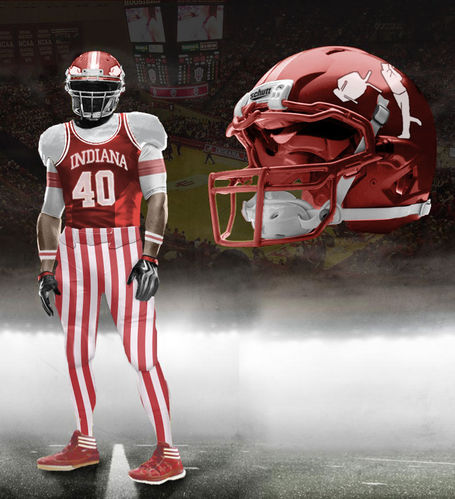 Building on the popularity of Iowa's recent barnyard-themed uniforms, Nike has announced that it will be giving the
Pro Combat to each school in the Big Ten. The roll-out starts today with new uniforms for Indiana University and will continue intermittently over the course of the next two weeks.

"These Midwesterners just went cuckoo bananas over the Iowa uniforms," said Nike head designer and Greek expatriate Christopher Polyblend, "so we decided to bestow new, regionally-specific uniforms for each school. I am a busy man, however, so the designs will be based on the whatever scraps of news or broad stereotypes about the schools that I encounter."

Polyblend explained his new design for the Hoosier football team in a teleconference from his glass design sphere in Beaverton, Oregon: "The one thing I know about Indiana people is that they love basketball. Love basketball. I saw this movie with Gene Hackman on TV the other night about a group of scrappy underdogs who overcome, and it really inspired me. And if I hadn't seen The Replacements that night, I might never have looked up Hoosiers and been keyed in to the whole Indiana-basketball thing. From there it only took a quick scan of the Indiana sports blogs to see that enthusiasm for the school's basketball team was tremendous."

"The enthusiasm for the football team was less so."

Polyblend explained the advantages of his uniform design. "I am hoping to leverage the enthusiasm that native Indianans feel when they perceive certain visual cues related to Hoosier basketball. Cutting-edge research from our Nike ZOOM PET Neuroimaging Lab has revealed marked differences in neural activity when your average Bloomington resident views the traditional wardrobe of the Indiana basketball and football teams." 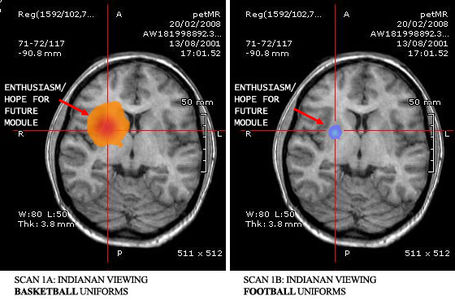 "We hope that when Indianans see the trademark striped warm-up pants and traditional crimson tank-top uniform, their autonomic nervous systems will kick in and massive quantities of serotonin and endorphins will be released. These chemicals will, in all likelihood, induce cheering, stomping of the feet, and the urge to clap vigorously. Crucially, all this will happen whether or not there is any objective reason for enthusiasm." 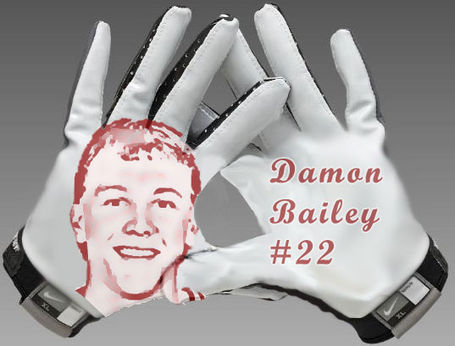 Polyblend explained that he hopes to jump-start a virtuous cycle at the woebegone football program. "If we can get the fans enthusiastic, then that will encourage the team and create what is known as a "home-field advantage" -- similar to a "home-court advantage" for any Indiana fans out there -- which will improve the results on the field, further encouraging the fans, and so on."

"And if not, the uniforms can be easily re-used by the basketball team, because they are actually used uniforms that I found in a dumpster behind Assembly Hall. So my design is economical too."

When cornered in the Indiana locker room, head football coach Kevin Wilson expressed dismay at the new designs. "When will the mockery of Indiana football cease? Am I forever destined to endure gentle ribbing from media types without a clue? For God's sake, have pity. I am not an animal -- I am a human being!"

HOOP-LETIC WEAR FOR THE GRIDIRON CAGER 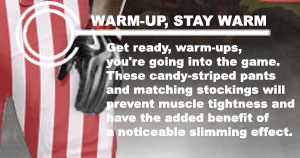 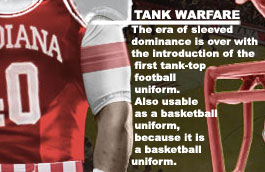 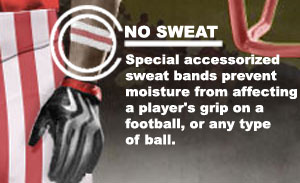 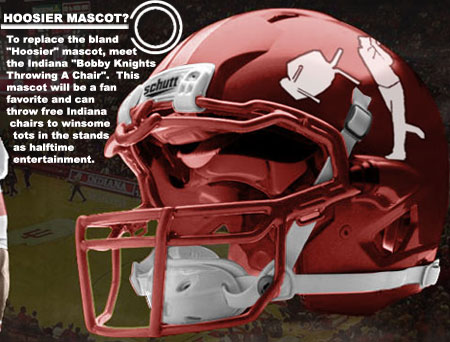