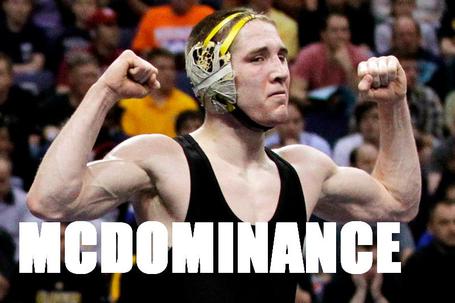 I did this last year and meant to get it started a bit earlier this year ('til various other matters intervened), but in a nutshell there are two purposes behind the Looking Ahead series: an opportunity to take stock of the year that was for Iowa at a particular weight and a rough preview of what 2012-13 might bring for Iowa (and the rest of the nation), based on who's coming and who's going. So let's dive right in, shall we?

In a one-match situation, anything can happen, particularly against fellow elite wrestlers. That said, McDonough has a few advantages on Metcalf: we know going into Metcalf's senior season that Lance Palmer and Darrion Caldwell were going to be tough challenges -- Caldwell had famously upset him in the NCAA Tournament final the year before thanks to a slick style and incredible athleticism and Palmer's combination of size, strength, and defense (not to mention self-tanner) always made him difficult to topple. McD's competition like that is gone; the guy with the rock-solid defense (Precin) and the guy with the freakish athleticism (Robles) aren't around to bedevil him. The guys who are left are mainly guys that he's basically had his way with thus far. He's going to enter 2011-2012 as one of the biggest prohibitive favorites to win a national title in all of collegiate wrestling, and justifiably so. Of course, the downside to being such a prohibitive favorite is that finishing anywhere other than the top of the mountain would be a disappointment. Fortunately, I think McD has the ability and the mindset to live up to the sky-high expectations and become Iowa's first three-time NCAA finalist and two-time NCAA champion since (who else?) Brent Metcalf.

The Verdict: This McD fella is pretty good, huh? McD did virtually everything asked of him in 2011-2012: he went 36-1, won both a Big Ten title and an NCAA title (the first time he'd ever managed that particular accomplishment; last year he won a B1G title but no NCAA title and the year before he grabbed an NCAA title but no B1G title), and led the team. There are quibbles, sure -- he did lose a match, and his pinfall and bonus point win numbers decreased slightly (from 14 to 12 and 22 to 21, respectively) -- but all in all, McD had a fantastic, triumphant season.

Brandon Precin was McD's most frequent nemesis in 2010-11 and while he graduated before this season, his legacy lingers over the entire 125 lb. weight class, since he laid down the blueprint on how to slow down (and beat) McD: be long and strong, have virtually airtight defense, be able to ride extremely well, and hope to be able to land one decisive takedown. We saw several wrestlers try to use that blueprint with varying success in 2011-12: Nico Megaludis definitely used it, as did Zach Sanders (although he lacked the physical attributes necessary to make it really effective), and Jesse Delgado used elements of it (as well as some of his own natural funkiness). Megaludis and Delgado return in 2012-13 and several other wrestlers will no doubt try to make use of that style, too, so McD had better be ready for it. The good news is that, well, he did win all but one match this year, so he was certainly still finding ways to win no matter how much his opponents tried to stymie him. He's still the best 125er around -- it would just be nice if he could find a way to turn some of those very narrow decision wins into more lopsided decisions -- or even bonus point wins.

Five of eight All-Americans return in 2012-13, including both finalists (McD and Nico). Delgado will attempt to improve on a disappointing 7th-place finish, while Missouri's Alan Waters will try to stop crapping the bed come NCAA-time: two years in a row now he's entered with a high seed and failed to even become an All-American. He's clearly a talented wrestler (as the rest of his season results indicate), so you'd have to assume that he'll get the NCAA Tournament figured out at some point. Jarrod Patterson (a 2011 All-American) will also be back and Virginia Tech's Jarrod Garnett (frequently ranked in the top-10) will be returning to action after a redshirt year.

There's also a pretty loaded class of incoming freshmen arriving next year, headlined by Penn State's Jimmy Gulibon, InterMat's #3 overall recruit. He projects at 125, although Penn State (obviously) already has a very fine option there in Megaludis, the returning NCAA runner-up. Presumably one of them will redshirt in 2012-13, although it's not clear yet which one that would be (it would be a little odd for Megaludis to redshirt after having so much success this season, but he was just a true freshman). You'd also have to assume that one of them will eventually be at 133, but I have no idea which one might move up. Iowa also brought in a pair of highly-touted wrestlers around this weight, Thomas Gilman (InterMat #10) and Cory Clark (InterMat #11). Many sites have Gilman projected at 133 and Clark at 125, but it's so early that who knows how that will shake out. Either way, both guys will be redshirting in 2012-13 with McD and Ramos ahead of them, but if they're as good as expected they'll be strong workout partners and excellent options for 2013 and beyond. Also of note is Wisconsin's Jesse Thielke, who was a superstar recruit a year ago and sat out 2011-12 while he trained at the Olympic Training Center. Young guys have made noise at this weight quite often (see: Delgado and Megaludis last year or McD three years ago), so he could certainly shake things up at 125.

But, really, this looks to me like a three-horse race in both the Big Ten and NCAA Tournament: McD, Megaludis, and Delgado. Delgado was able to tag McD with a loss last year, but McD also avenged that with a pair of wins later in the season; he's also 2-0 against Nico. But both guys made him work hard for those wins and if they continue to improve (as you'd expect), they should remain formidable foes for McD. On the other hand, they also struggle with something McD has been able to excel at: consistency. Nico went 29-8 last year, while Delgado went 34-8. McD, lest we forget, has lost four times total in his career. Until further notice, he's the man at 125. (And, really, in a way it would be just fine if Nico and Delgado wound up 2/3 next year at B1Gs and NCAAs because it would guarantee that McD would only have to face one of them.)